Since she was a little girl, Jane Gloriana Villanueva has always done everything by the book—including vowing to remain a virgin until marriage at her abuela’s admonishing. Who would have guessed that as a 23-year-old virgin, getting “accidentally” artificially inseminated (and all the crazy shenanigans that naturally follow) would threaten to derail her entire life’s plan? I know! Straight out of a telenovela!

With the show in it’s fifth and final season, we’re excited to see what becomes of Jane’s topsy-turvy life.  An unimaginable tale told in chapters (with twists you don’t see coming), it’s only right that we offer a Jane the Virgin reading list. Whether you’re team Michael or team Rafael, a telenovela whiz or a novice, a superfan of the hit show, or if you’re just in the mood for a great new read, you’ll love these books.

You’re safe to read on! Spoiler-free recommendations (for the show and the books). 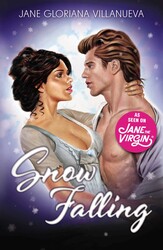 |+| Add to Your Shelf
Snow Falling
by Jane Gloriana Villanueva

Jane is a published author! Accomplishing one of her life-long dreams, Jane's debut novel SNOW FALLING hit shelves (way) back in 2017. Inspired by the real life love story with Michael Cordero Jr., this sweeping historical romance is set in 1902 Miami. Much like her own tumultuous life, Jane's novel features crime lords, scandal, heartbreak, and a sumptuous love triangle.

It’s been a lifetime (and three seasons) in the making, but Jane Gloriana Villanueva is finally ready to make her much-anticipated literary debut!

Jane the Virgin, the Golden Globe, AFI, and Peabody Award–winning The CW dramedy, has followed Jane’s telenovela-esque life—from her accidental artificial insemination and virgin birth to the infant kidnapping and murderous games of the villainous Sin Rostro to an enthralling who-will-she-choose love triangle. With these tumultuous events as inspiration, Jane’s breathtaking first novel adapts her story for a truly epic romance that captures the hope and the heartbreak that have made the television drama so beloved.

Snow Falling is a sweeping historical romance set in 1902 Miami—a time of railroad tycoons, hotel booms, and exciting expansion for the Magic City. Working at the lavish Regal Sol hotel and newly engaged to Pinkerton Detective Martin Cadden, Josephine Galena Valencia has big dreams for her future. Then, a figure from her past reemerges to change her life forever: the hotel’s dapper owner, railroad tycoon Rake Solvino.

The captivating robber baron sets her heart aflame once more, leading to a champagne-fueled night together. But when their indiscretion results in an unexpected complication, Josephine struggles to decide whether her heart truly belongs with heroic Martin or dashing Rake.

Meanwhile, in an effort to capture an elusive crime lord terrorizing the city, Detective Cadden scours the back alleys of the Magic City, tracking the nefarious villain to the Regal Sol and discovering a surprising connection to the Solvino family.

However, just when it looks like Josephine’s true heart’s desire is clear, danger strikes. Will her dreams for the future dissolve like so much falling snow or might Josephine finally get the happy ever after she’s been dreaming of for so long?

|+| Add to Your Shelf
Where'd You Go, Bernadette
by Maria Semple

If you’re a die-hard JTV fan, you probably recognize WHERE’D YOU GO, BERNADETTE as one of Jane’s favorite books (it was even one of her book club’s picks). In Maria Semple’s zany novel, Bernadette Fox is missing and it’s up to her 15-year-old daughter, Bee, to find her by compiling clues in email messages, official documents, and secret correspondence, which makes for a compulsively readable and touching novel.

Read the full review of WHERE’D YOU GO, BERNADETTE.

Bernadette Fox is a fiercely independent wife and mother, when one day she disappears. It began when her daughter Bee aced her report card and claimed her promised reward: a family trip to Antarctica. But Bernadette's intensifying allergy to Seattle—and people in general—has made her agoraphobic, making a trip to the end of the earth a bit of an issue. To find her mother, Bee compiles email messages, official documents, and secret correspondence.

All the Books You Need for National Sunglasses Day

6 Books to Read If You Loved “Lady Bird”

|+| Add to Your Shelf
The Purity Myth
by Jessica Valenti

Perhaps the most fascinating thing about Jane the Virgin is its ruminations on faith, sexuality, and motherhood—because what’s more fascinating than a pregnant virgin? THE PURITY MYTH is Jessica Valenti’s in-depth cultural and social analysis of our obsession with virginity. This is the perfect book to understand the social implications—and dangers—of placing a girl’s worth entirely on her sexuality and puts unique stories like Jane’s into perspective.

|+| Add to Your Shelf
The Purity Myth
Jessica Valenti

|+| Add to Your Shelf
Evil Under the Sun
by Agatha Christie

Agatha Christie’s EVIL UNDER THE SUN is set at the Jolly Roger, a posh vacation resort for the rich and famous. Sound familiar? There’s never a shortage of mysteries (or dead bodies) at the Marbella, the fictional hotel where Jane works. In Christie’s page-turning mystery, a young bride is brutally murdered and only the meticulous Belgian detective, Hercule Poirot, can unravel the macabre mystery. This is the perfect book for Jane to turn to when putting on her amateur PI hat.

|+| Add to Your Shelf
Evil Under the Sun
Agatha Christie

Of course, no list of murder mysteries worth its salt can leave out legendary writer Agatha Christie. In EVIL UNDER THE SUN, meticulous Belgian detective Hercule Poirot is on the trail of the killer of a sun-bronzed beauty whose death brings some rather shocking secrets to light.

13 Page-Turning Murder Mysteries Recommended by Off the Shelf Readers

When Jane’s abuela, Alba, falls down a flight of stairs (or was she pushed?) and is rushed to the hospital, she’s worried about her status as an undocumented immigrant. Diane Guerrero, who plays Jane’s best friend and co-worker, Lina, perfectly captures the plight of undocumented immigrants and their families in her moving memoir IN THE COUNTRY WE LOVE.

|+| Add to Your Shelf
In the Country We Love
Diane Guerrero

|+| Add to Your Shelf
Wideacre
by Philippa Gregory

As Jane's inches closer and closer to her dream of becoming an award-winning author, she might want to turn to Philippa Gregory—a master of historical fiction—for some guidance. WIDEACRE is Gregory’s scandalous debut about Beatrice Lacey, the beautiful and rebellious woman willing to go to any means to inherit her family fortune and protect her family name. Notes for Jane: seduction + betrayal + murder = winning historical novel.

Jane meets one of her heroes, Isabell Allende, in a bookstore and gets valuable author advice from one of the best! But you might also remember (because how could you not?) Jane’s highly unethical but totally imaginary (so, it’s okay) make-out session with her academic adviser, Professor Chavez. Their shared love of Isabel Allende’s classic THE HOUSE OF THE SPIRITS is, understandably, what kicked Jane’s crush into high gear. Anything from Allende’s inspired backlist will win over Jane the Virgin fans, but this one is just right for fans of universal stories of love, magic, and fate.

My 2022 Reading Challenge: 9 Goals to Expand My Literary Horizons

|+| Add to Your Shelf
The Idiot
by Elif Batuman

In the short time we’ve known her, Jane has transformed from an unassuming virgin and waitress to a passionate single mother and aspiring writer. In THE IDIOT, Selin is a young woman dealing with the terror and joy of becoming a person in a world that is as intoxicating as it is disquieting. She’s a lot like Jane—just without the modern-day immaculate conception.

|+| Add to Your Shelf
The Idiot
Elif Batuman

|+| Add to Your Shelf
Crazy Rich Asians
by Kevin Kwan

What do Jane and the protagonist of CRAZY RICH ASIANS, Rachel Chu, have in common? Their unexpected plunges into the lifestyles of crazy rich boyfriends and baby daddies have thrown them for a loop because, as we all know too well—more money, more problems. On the arm of the most eligible bachelor in Singapore, Rachel’s visit to her boyfriend’s family home turns into an obstacle course of old money, new money, nosy relatives, and scheming social climbers. The outlook isn’t looking too great, but let’s hope things fare better for Jane.

Author Picks: 6 Books That’ll Fly You Away to Distant Lands

An Ode to Indies: 12 Wonderful Books I Found At Independent Bookstores

What Book Should You Read Based on Your Zodiac Sign?

All the Books You Need for National Sunglasses Day

|+| Add to Your Shelf
The Mothers
by Brit Bennett

Not only does Britt Bennett’s debut touch on how mistakes can be inherited through generations; more important, it brings abortion to light in a very real way much like Jane the Virgin. Jane’s ambivalence over aborting her unexpected pregnancy; her mother’s uncertainty over aborting Jane; and Alba’s crisis of faith in the face of such weighty decisions remind us that either choice could have potentially damaging and life-altering consequences. In THE MOTHERS, it isn’t just Nadia Turner’s life that is changed by her decision, but the lives of many in her Southern California community.

Read the full review of THE MOTHERS.

|+| Add to Your Shelf
The Mothers
Brit Bennett

I waited years to sit at the grown-ups’ table at family dinners, hoping to catch a juicy story or an important life lesson. In Brit Bennett’s THE MOTHERS, the narrators, “the mothers,” walk the line between guidance and gossip quite ruthlessly. Despite it all, congregants of the Upper Room Chapel see them as pillars of the community who, unbeknownst to the churchgoers, know all of their secrets. So watch what you say at the dinner table.

We Were Girls Once: You Must Read This Beloved Coming of Age Novel