I love a book where the writing is easy enough to read—but the main character, on the other hand, is not. That’s what appealed to me the most about OLIVE KITTERIDGE. The brutally honest retired schoolteacher was unlike any protagonist I’d met in a novel before. And, because of her many dark, brooding moments, the scenes where we see a flicker of love or joy on her part were that much more rewarding. The books in this list all carry a sophisticated puzzle of a character, depicting stories where half the fun is trying to unravel their complex emotions.

|+| Add to Your Shelf
A Little Hope
by Ethan Joella

In OLIVE KITTERIDGE all the stories revolve around the eponymous character, even if she’s just in the periphery. A LITTLE HOPE applies that same narrative structure, but instead revolves around a couple: Freddie and Greg Tyler. In a small Connecticut town, Greg’s cancer diagnosis has him and his wife, Freddie, concerned for the future and how their seven-year-old daughter will cope. From there, the stories expand out toward a dozen other members of the community, who are connected to the Tylers in various ways, and who are struggling with their own futures and challenges. These are ordinary lives where nothing too dramatic happens in term of plot. But the intrigue comes from how the characters handle their universal hopes and tragedies, and how they reveal so much about the human spirit—within themselves and ourselves. And how through all seasons, there’s always a little hope.

|+| Add to Your Shelf
A Little Hope
Ethan Joella

A deeply moving, life-affirming novel about residents in a small Connecticut town facing everyday fears and desires—a lost love, a stalled career, a diagnosis—that pulls at the heartstrings and provides hope, for readers of Olive Kitteridge.

In the small city of Wharton, Connecticut, lives are beginning to unravel. A husband betrays his wife. A son struggles with addiction. A widow misses her late spouse. At the heart of these interlinking stories is one couple: Freddie and Greg Tyler.

Greg has just been diagnosed with multiple myeloma, a brutal form of cancer. He intends to handle this the way he has faced everything else: through grit and determination. But can Greg successfully overcome his illness? How will Freddie and their daughter cope if he doesn’t? How do the other residents of Wharton learn to live with loss, and find happiness again?

An emotionally powerful debut that immerses the reader into a community of friends, family, and neighbors, A Little Hope celebrates the importance of small moments of connection and the ways that love and forgiveness can help us survive even the most difficult of life’s challenges.

Winter Most Anticipated: 15 New Reads We’re Hibernating with This Year 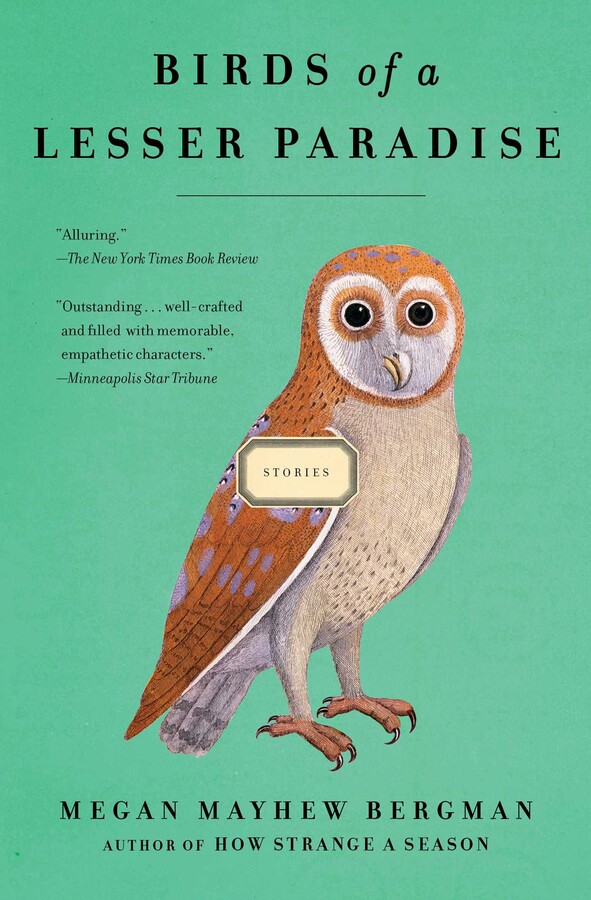 I sometimes think of Olive Kitteridge as an old aunt or family friend—she’s so memorable in her honest stubbornness that she just sticks with me in a way that characters rarely do. Author Megan Mayhew Bergman creates female characters that also feel so unique, yet familiar. In Bergman’s very first short story collection, BIRDS OF A LESSER PARADISE, she explores various women characters’ connections to nature—animals, humans, biology, etc. One story follows a woman determined to hear her deceased mother’s voice again, by tracking down a parrot she used to own. In another story, an activist protesting for stronger population control struggles with her own desire to be a mother. For a short story collection that will leave you in tears and might just blur into your own memories, read the author’s debut, BIRDS OF A LESSER PARADISE.

An “astonishing debut collection, by a writer reminiscent of such greats as Alice Munro, Elizabeth Strout, and even Chekhov” (Sara Gruen, author of Water for Elephants), focusing on women navigating relationships with humans, animals, and the natural world.

Exploring the way our choices and relationships are shaped by the menace and beauty of the natural world, Megan Mayhew Bergman’s powerful and heartwarming collection captures the surprising moments when the pull of our biology becomes evident, when love or fear collides with good sense, or when our attachment to an animal or wild place can’t be denied.

In “Housewifely Arts,” a single mother and her son drive hours to track down an African gray parrot that can mimic her deceased mother’s voice. A population-control activist faces the conflict between her loyalty to the environment and her maternal desire in “Yesterday’s Whales.” And in the title story, a lonely naturalist allows an attractive stranger to lead her and her aging father on a hunt for an elusive woodpecker.

As intelligent as they are moving, the stories in Birds of a Lesser Paradise are alive with emotion, wit, and insight into the impressive power that nature has over all of us. This extraordinary collection introduces a young writer of remarkable talent.

|+| Add to Your Shelf
The Removed
by Brandon Hobson

THE REMOVED centers around a large Cherokee family, and the decades-long aftermath and recovery from the murder of their beloved Ray-Ray by police. Alternating perspectives of each family member, we see snippets of their lives and how they’ve grown in the fifteen years following Ray-Ray’s death. Author Brandon Hobson weaves in Cherokee myths, blends the physical and spiritual worlds, and crafts character-driven vignettes in a way that makes you feel as if you’re perhaps Ray-Ray himself, watching his family and loving them from beyond.

|+| Add to Your Shelf
The Removed
Brandon Hobson 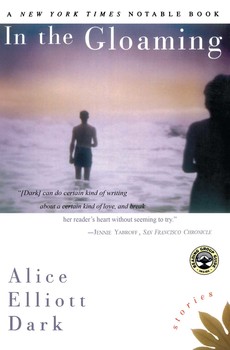 |+| Add to Your Shelf
In The Gloaming
by Alice Elliott Dark

So I pretty much love any book that’ll make me cry, and one of my favorite parts of reading OLIVE KITTERIDGE is those profound scenes that built up to a cathartic release. Alice Elliott Dark’s short story collection likewise handles so many dark, emotional story lines with compassionate care. One follows a cynical author who, when she finds out she’s dying of cancer, must get to know her town to find good homes for her dogs before she dies. In another, a tense jungle safari vacation reveals intensely dark secrets between two sisters. Each story illuminates the breadth of human emotions and experiences and builds up to a point that’s enormously satisfying.

|+| Add to Your Shelf
In The Gloaming
Alice Elliott Dark

When the austere and moving title story of this collection appeared in The New Yorker in 1993, it inspired two memorable film adaptations, and John Updike selected it for inclusion in The Best American Short Stories of the Century. In these ten stories, Alice Elliott Dark visits the fictional town of Wynnemoor and its residents, present and past, with skill, compassion, and wit. By turns funny, sad, and disturbing, these are stories of remarkable power.

Gloria Naylor’s classic, THE WOMEN OF BREWSTER PLACE, takes place in an unnamed central section of an urban city that’s in disrepair, spanning the 1940s through the mid-1970s. In each chapter, we dive into the perspectives of seven Black women. We learn what brought them to Brewster Place, what obstacles they face in their neighborhood that both harms them and provides sanctuary, and what their hopes are for the future. Throughout all their stories, Brewster Place comes to life and starts to feel like a character itself, in the same way that OLIVE KITTERIDGE animates small-town Maine. And for each character in turn, I could easily read an entire novel from one of the seven women’s point of view.

|+| Add to Your Shelf
The Women of Brewster Place
Gloria Naylor

Gloria Naylor’s debut novel, which won the American Book Award and the National Book Award for first novel, tells the overlapping stories of 7 women living in Brewster Place, a bleak inner-city sanctuary. THE WOMEN OF BREWSTER PLACE is a powerful, moving portrait of the strengths, struggles, and hopes of black women in America.

7 Books That Are Love Letters to Women

|+| Add to Your Shelf
The Debut
by Anita Brookner

Looking back on her life, Ruth Weiss starts to think that her love of literature caused her to miss out. A somewhat reclusive child, she escaped from the chaos of society, friends, and family by reading books. But a midlife crisis causes her to reconsider her past—one that was in fact not coddled by literature, but rather shaped by it. Through her memories, she reveals the true depth of her life—one that readers might see themselves in as well. Told with dry, honest humor, similar to OLIVE KITTERIDGE, this is a novel to add to your to-read list—plus, at 192 pages, it’s slim enough to enjoy in a day.

|+| Add to Your Shelf
The Debut
Anita Brookner

12 Novels for a Stellar Summer Staycation 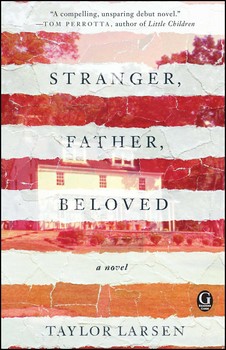 |+| Add to Your Shelf
Stranger, Father, Beloved
by Taylor Larsen

I was immediately hooked by the premise of STRANGER, FATHER, BELOVED. Michael watches his wife have a conversation with another man at a dinner party, and thus begins his paranoia that he’s not the right one for her. He begins to maneuver his way out of his family’s lives so that they can be happier. But given how his delusions affect everyone around him, we witness the deeply painful psychological impact this has on his family and friends. Similarly, in OLIVE KITTERIDGE, we see how Olive affects those around her, but while I ended up deeply caring for Olive by the end, the characters in this book become less redeeming as the book moves along, which is part of the story’s fascination. As they each descend into darker territory, you really can’t look away, and the themes of marriage, friendship, family, and mental health become ever more intertwined.

A Huffington Post “2017 Hottest Reads of The Summer” Pick

“Taylor Larsen creates a powerful and moving story about the fracturing of a family and its descent into chaos. A brilliant debut of self-delusion, and a perfectly flawed male character spiraling downward.” —Huffington Post

An “emotionally intelligent family drama” (Kirkus Reviews, starred review), in the tradition of Tom Perrotta’s Little Children, about a wealthy man who reaches a crossroads after a lifetime of repression, sending his family into a slow spiral towards a breakdown.

When Michael James sees his wife Nancy chatting with a stranger at a party, his intuition tells him that he’s watching her with the man she should have married. He quickly begins a campaign to replace himself within his own family with this other man—who, to him, is worthier, better, and kinder—all so his faithful wife Nancy, his beautiful teenage daughter Ryan, and his young son Max can live the lives they deserve.

While Michael pursues this man’s friendship, Ryan goes through a period of sexual awakening and rebellion and distances herself from her family, and the quiet, weak Nancy becomes increasingly befuddled and frustrated by the behaviors of her husband and daughter. As tension and uncertainty build in their home, the James family slowly unravels.

With the quiet intensity of the film American Beauty and the emotional sensitivity of Lorrie Moore, Taylor Larsen creates a powerful and moving story about the fracturing of a family and its descent into chaos.

|+| Add to Your Shelf
Olive Kitteridge
by Elizabeth Strout

And of course, a reread of OLIVE KITTERIDGE is always the way to go when you start to miss that old curmudgeonly retired schoolteacher herself.

At times stern, at other times patient, at other times in sad denial, Olive Kitteridge is one of literature’s most complex characters in recent years. This Pulitzer Prize–winning novel offers profound insights into the human condition—its conflicts, its tragedies and joys, and the endurance it requires.

9 Books to Give to Important Women in Your Life