THE PERKS OF BEING A WALLFLOWER is 20 this year and we (Leora and Erin) are reminiscing about the groundbreaking book—a modern classic in its own right. This coming-of-age story also got us thinking about our high school days. Because with PERKS being so ingrained in our lives, to discuss Charlie is to remember back then. Although his school was so much cooler than ours. We wish we went to a place where they had a lot of vinyl.

If you’ve haven’t read THE PERKS OF BEING A WALLFLOWER, follows observant “wallflower” Charlie, as he deals with first dates, family drama, and new friends as he transitions from adolescence to adulthood. Caught between trying to live his life and trying to run from it, Charlie must learn to navigate those wild and poignant roller-coaster days known as growing up.

Erin: So, THE PERKS OF BEING A WALLFLOWER—20th anniversary?

Leora: Really? I mean, I’m sure I knew that, but I didn’t really pay attention.

We have a lightning round. This is a bunch of questions we believe that Charlie himself would ask us—as he would ask anyone he wanted to be his friend.

Erin: ROOM, or LINCOLN IN THE BARDO. Oh, and THE ISLAND OF SEA WOMEN.

Leora: You’ve Got Mail. Hands down, favorite movie. Or Clue!

Erin: I have a different favorite song each week.

Leora: What is it this week?

Erin: I have been in a Rent mood. Today was “Seasons of Love.”

Which character from PERKS do you find most relatable?

Leora: I’m really sad to say that I’m Mary Elizabeth. I would absolutely fall in love with someone because they gave me a really thoughtful gift.

Erin: I was more Charlie in high school, because I was the person in high school who would know everything about everyone because they would all talk about things in front of me. Everyone would probably see me as that smart kid in the corner putting the newspaper out.

Leora: But here’s the thing about Charlie. Sure, he’s the person in the corner putting the newspaper out, but I feel like Charlie spends the entire book trying to figure out who he is. And he almost keeps putting on these costumes of other people.

Erin: I love the ending. I really do. No spoilers.

Erin: Yeah, there are people who haven’t read it! So, no spoilers, but here’s my question: Do you think he ever really finds himself? In my opinion, he just starts to kind of cope with his trauma.

Leora: I think the reason he has to cope with that trauma is because he spent so much of his life hiding, and then he found these people, and the second they were going to leave—because they’re not going to come back—he loses himself again. And I think he can’t handle it, so he has a legit breakdown. And then, after all of that, after he heals, he says “tomorrow I have to start sophomore year and I have to start again. Try again.” I think he’s a survivor.

Erin: He really is.

Leora: I think it’s easy to be Charlie. Or rather, to see yourself in Charlie.

Erin: But I think that’s the point of the book. And why it was so popular. Because everyone can see themselves in Charlie.

What is the book mentioned in PERKS you haven’t read but probably should?

Leora: I haven’t read NAKED LUNCH [Burroughs], but I feel like I should. I feel like everyone should, but I don’t know why.

Who was your favorite English teacher?

Leora: Ninth grade, I had a really good English teacher that had to leave in December. And it was the worst. Because he was amazing. He gave everyone THE CATCHER IN THE RYE  and when I was like “This is cool!” he gave me the rest of J. D. Salinger’s stuff. I loved it, and I came in to talk to him about Franny and Zooey. By the time I came in to talk to him about the next book he gave me, he was gone.

Erin: I took a creative writing class, and I was one of the few people in this class that wanted to write. So my teacher encouraged my writing so much. And he also ran the creative writing club. so he let me come into his club every week and read a chapter from my burgeoning novel. It meant so much to me that he let me come into this class and was so excited to hear my writing and gave me solid feedback and so many stories.

Leora: I always wonder if Charlie’s going to be a writer. He says he will, but I don’t know.

Erin: I feel like there are so many ways he could go right now. He could either get it together or he could be one of those people who are 33 and still haven’t figured out their lives.

Erin: So he either figured it out or he didn’t. I think it’s interesting that it could go either way.

Leora: I don’t think anyone ever really figures out their lives. Period, but especially not as a freshman.

Name a moment in PERKS that made you go “Holy crap, time is a flat circle.”

Leora: There are moments when it really becomes clear that PERKS is about what it’s like to be a teenager. But then there are these other times when it’s about feminism and the #metoo movement and about LGBTQ+ representation.

Erin: Yeah it definitely has those vibes. There’s a lot of moments when you go “Well, times never change.” Like the thing with his sister, and the idea that you are always trying to be a teenager and grow up.

Leora: Oh, I just remembered what I was thinking of. There’s that point when they’re talking about politics, and they’re like “It’s 1992. We have to get Bush out of office. He’s the worst thing that’s ever happened. We have to watch the debates and make sure we can vote” and I’m just thinking, How is this happening again?

Erin: The thing about this book is, when I read it in high school, I felt like Charlie was young. I didn’t get it. But now, rereading it as an adult, I got it so much better. And looking back, I realized that I can relate so well to Charlie and what he does with his friends.

Leora: I think, reading PERKS, you see real teenagers, who think they’re special, and think they know what it is to be infinite.

Erin: That’s a question I have.

What was a moment when you felt infinite?

Leora: When you’re laughing so hard with your friends, and you think “This is the best moment ever.” It’s very young and very chemically enhanced I’m sure, but those are the moments when I feel like there was something more, and I think part of growing up is knowing that those moments aren’t really going to happen anymore. But that might be why I liked this book so much, because it is a reminder of the times you felt infinite. What about you?

Erin: So, I have a couple. The first one was when I was 17 and I went to a writer’s conference for the first time. I traveled only with my sister, and we were staying in this hotel on this upper floor in Denver, and we had a balcony. So we went out and looked at the dark lights of Denver, and I just remember in the room thinking “Nothing could ever feel better than this moment.” And that everything was in front of me and the world was just stretching out.

Leora: I think another word for “infinite” is just “hopeful.” But there’s definitely a moment when you’re with your friends or you’re doing something you love and you think, Life can be good; there’s a reason for this.” PERKS starts with this dark moment where this kid kills himself, so it immediately starts with hopelessness, and for Charlie to find these little moments of light in what can be a dark book is one of the reasons it’s so important.

The Perks of Being a Wallflower
by Stephen Chbosky 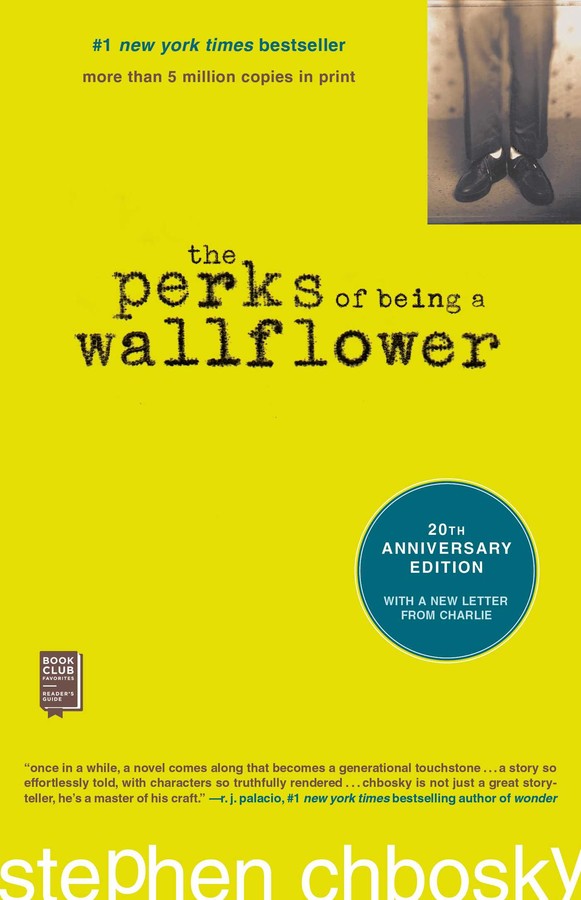 Staff Tips: Everything You Need to Know About Starting a Book Journal

10 Books That Will Make You Feel At Home, No Matter Where You Are