As a young writer, I was often told that you needed to master all the rules of writing before you could go about breaking them, and this statement is illustrated perfectly in the work of George Saunders. In his short story collection TENTH OF DECEMBER, Saunders demonstrates clearly that he can master and twist every rule to his will, but in his first novel, LINCOLN IN THE BARDO, he takes this a step further, breaking every single rule in the most beautiful and poignant way possible.

I finished reading LINCOLN IN THE BARDO less than five minutes ago. Despite already being at my desk at work, I needed to get through those last nine pages. Now, I feel I cannot work until I tell someone about this book. LINCOLN IN THE BARDO is a portrait of grief told in the most unconventional format. It combines excerpts from historical documents’ short, stitched-together segments of historical fiction; and monologues from the supernatural to paint a picture of Abraham Lincoln’s grief following the death of his son Willie.

During the first few pages, I became fully convinced that this novel could not possibly work, what with its considerable number of characters, nontraditional format, and strange melding of a ghost story and Abraham Lincoln. Being a fan of George Saunders, though, I felt compelled to keep reading and quickly realized that my original assumption was not only wrong but a complete disservice to Saunders and this novel.

LINCOLN IN THE BARDO reads almost like a play, as it is told through the direct observations of various ghosts, historians, and historical figures on the night when Willie Lincoln is laid to rest. Over the next few hours, President Lincoln arrives at the cemetery to hold his son’s body one last time, and unbeknownst to Lincoln, a great struggle begins for the fate of Willie’s soul.

Beyond Willie’s death and Lincoln’s grief, there are various other narratives twisting into this story. Every word is a picture of the anger, sadness, regret, or fear that holds the ghosts to this world. Not only did I care for the fate of young Willie, I also wanted to know the fates of each of the spirits, from Mr. Vollman, who died while winning the love of his young bride, to Litzie Wright, a light-skinned black girl who has grown mute due to the torture she faced in our world, to the Reverend Thomas, who struggles with his faith in the afterlife.

Since the start of this year, I’ve been searching for the next read that I just needed to share with as many people as possible. LINCOLN IN THE BARDO is that book. While at first it may seem that George Saunders has thrown all the rules out to his detriment, it soon becomes apparent that he’s actually written what I will easily deem a masterpiece, worth every single word.

Lincoln in the Bardo
by George Saunders 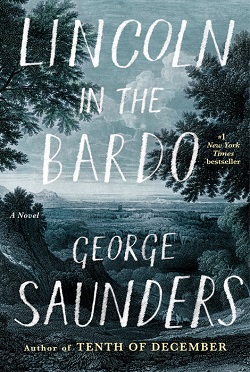 |+| Add to Your Shelf
Lincoln in the Bardo
George Saunders

George Saunders is an acclaimed short story writer of collections THE TENTH OF DECEMBER, PASTORALIA, and more. His first novel, LINCOLN IN THE BARDO, is a mesmerizing blend of historical fact and fiction. It is the story of the death of Abraham Lincoln’s son, Willie, told almost entirely through the voices of the spirits in the graveyard where Willie is laid to rest and where Lincoln returns to hold his son’s body. —Erin

12 Tips for How to Read as Many Books as Possible

The 11 Books on Our Nightstands Right Now