With a movie based on the book being released next month, I’ve been inspired to share one of my favorite novels, ROOM, by Emma Donoghue. When watching an adaptation from a book, I will be the first to critique it. In the case of Room, I will be sitting in a theater in a few weeks prepared for a gripping, beautiful tale, and I will be furious if it does not meet the very high expectations this novel sets.

ROOM is a novel told from the perspective of a five year old boy. Jack’s limited vision of the world provides a unique perspective as the reader slowly becomes aware of the savage circumstances of his life, while Jack himself remains naïve. His narration creates intrigue within the first few lines: “Today I’m five. I was four last night going to sleep in Wardrobe, but when I wake up in Bed in the dark I’m changed to five, abracadabra.” The reader is immediately confronted with the question, “why did he go to sleep in a wardrobe?”

While there is something unusual about Jack and his mother’s lives, it is not until a man named Old Nick enters Jack’s confined world that the reader learns the deeply disturbing truth. Old Nick is holding Jack’s mother prisoner and, despite the horrifying abuse she suffers at the hands of her captor, she is doing her best to supply her son with a normal childhood in their tiny cell. Jack is hardly aware of the abuse his mother is subject to and it is up to the reader to fill in the blanks in his narration. As their situation escalates, Jack grows more aware of his surroundings, and it becomes clear that escape is the only way to survive.

ROOM showcases Donoghue’s excellent development of Jack’s voice, giving the reader a look at a restricted world and allowing us to watch Jack experience life in the real world for the first time. The story itself masterfully grapples with an intense and fascinating subject matter, and is a disturbing allusion to a horrifying situation that can and has happened. Ultimately though, the strength of this novel rests in Donoghue’s ability to allow the reader to witness extreme horror through the eyes of a child who has so little knowledge of the true circumstances of his life. 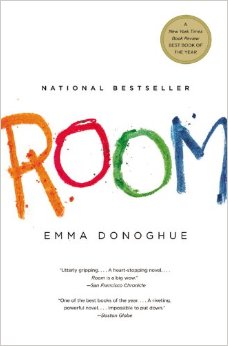 Adapting a child narrator for the screen could make a screenwriter’s life hell—but the author herself penned the script in this case, so there’s hope that the book’s celebration of resilience and the limitless bond between parent and child will have the adaptation it deserves.

Listen to the Kids! 12 Memorable Novels With Child Narrators

A Harrowing Novel of Evil and Redemption