Wait! What was that? Did I just catch you rolling your eyes because this title is just another “girl” book? Maybe you’re mentally ticking them off: THE GIRL ON THE TRAIN, GONE GIRL, THE GIRLS—yes, we in publishing have also noticed the trend.

But the other major trend with these kinds of psychologically suspenseful novels is that they usually begin with a girl—a woman—who is dead. It’s intriguing and sexy to have the crime’s aftereffects ripple out around a beautiful body who had so much potential ahead of her—and so many secrets to hide.

But ALL THE MISSING GIRLS is different. Rather than the novel beginning with a woman’s death, it’s her lack—her disappearance—that starts the story. And from there, this intricately plotted mystery twists further from traditional suspense through Megan Miranda’s unique approach to storytelling: she tells the story in reverse.

Nicolette left home at 18 and hasn’t looked back since. But now her father’s mind is failing, and she knows she needs to face family responsibilities, and perhaps the sea of rumors she left behind after her best friend, Corinne, disappeared into thin air ten years earlier. Why would Nic—now engaged and with life’s pieces falling into place—suddenly feel pulled to the town she hoped to forget forever? It has something to do with a dark night a decade before, family secrets, and a letter of shaky memories sent by her father, “I need to talk to you. That girl. I saw that girl...”

What starts off as promising becomes an absolute page-turner when Nic’s arrival coincides with another young woman’s vanishing and Miranda’s narrative jumps fifteen days into the future to reveal their timeline backward, day by day. The effect masterfully peels back layers of secrets and motivations. Characters who seem innocent become sinister, and the reader’s initial intrigue turns to fear. Is Nic telling the truth about that night—to others and to herself?

Beyond the slick storytelling, ALL THE MISSING GIRLS illustrates the best part of the “girl book” trends: that readers crave tales of mysterious, complicated women with the capacity to be so much more than the victim.

All the Missing Girls
by Megan Miranda 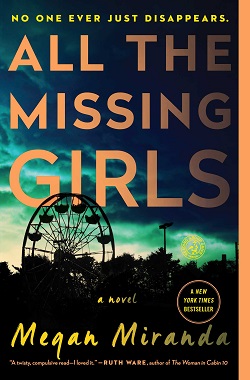 |+| Add to Your Shelf
All the Missing Girls
Megan Miranda

A spellbinding psychological thriller told in reverse, Megan Miranda’s first novel for adult readers is about the connected disappearances of two young women ten years apart in the same small town. Miranda has an uncanny talent for suspense. Megan Miranda’s new novel, THE PERFECT STRANGER, is just out.

Indie Bookseller Picks: 5 Gripping Novels I Recommend to Add Some Suspense to Your Summer

Books We’d Like to Get: 8 Bookish Gifts We’re Excited to Unwrap This Year