Every few years, there’s one book I latch onto that I keep recommending to people, over and over. And for the last year, that book has been DESCENT by Tim Johnston. I love character-driven thrillers, and this book was geared perfectly for me. But—more than the type of book—there’s something more, something that lingers, that keeps me coming back to it.

The book begins with a chapter titled “The Life Before.” If it was possible to be hooked on a story by a three word chapter heading, this would be the way to do it for me. Right away, I leaned a little closer. You can feel the inevitability that must follow: if this was before, then something was coming.

In the opening pages, we meet a girl named Caitlin, 18 years old, running in the Rocky Mountains during a family vacation. I’m not giving anything away by telling you she’s about to disappear. But in the life before, we also meet her brother, Sean, who’s trying to keep up with his sister, and their parents, in the hotel room, coming face-to-face with their own secrets.

In the aftermath, Sean ends up badly injured. Caitlin disappears with a strange man on her way to get help.

Grant, the father, has been unable to return home, as weeks turn to months turn to years. He remains behind, searching. The mother, Angela, trying, and failing, to continue on. The brother, stuck in that moment when his sister disappeared, embarking on his own journey.

The writing itself is at times poetic, mournful, and beautiful—as is the story. In short, this book speaks to my reader heart.

What makes a book the type of book you keep recommending to people, over and over? I think it’s a feeling you want to convey; something you can’t quite explain, but it cracks you open a little on the journey. Ultimately, DESCENT is more than a mystery or an exploration of a family in the aftermath of a tragedy: it’s a story about resilience, and the many facets of the endurance of the human spirit—to survive, to hope, to go on. 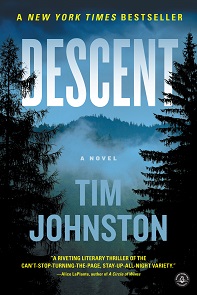 Notice: Trying to access array offset on value of type null in /home/offtheshelf/public_html/web/app/themes/ots/_inc/template-parts/books/book-modal.php on line 31
|+| Add to Your Shelf
Descent
Tim Johnston

The Courtland family is taking one last vacation in the Rocky Mountains before their daughter leaves for college. But when Caitlin and her younger brother, Sean, go out for an early morning run and only Sean returns, the mountains become as terrifying as they are majestic.

Read our review of DESCENT here.

10 International Thrillers Sure to Cure Your Wanderlust