It’s well documented that I love a good unreliable narrator. So how could I resist a bestselling thriller that boasts three? THE GIRL ON THE TRAIN delves into the minds of a trio of women whose lives are intertwined in a story of obsession, lies, and secrets. More compelling than a love triangle, the triangle of deception created by these three characters makes it so the reader can’t really trust any of them.

Who is telling the truth and who is hiding something? Who is a victim and who is a perpetrator? Who deserves sympathy and who deserves disdain? The answers to these questions prove to be far from black and white as the story unfolds.

The novel begins with Rachel, who rides the train to and from London daily. When the train stops at the same signal every morning, she can see onto the backyard patio of a couple she’s named Jess and Jason. Rachel becomes obsessed with Jess and Jason and their “perfect” life—a life that constantly reminds her of the one she lost. They live just a few doors down from the house where Rachel used to live with her ex-husband, Tom; he now lives there with his new wife Anna, the woman he left Rachel for, and their infant daughter.

One day, Rachel sees something happen on Jess and Jason’s patio that shakes her to her core. When Megan Hipwell (Jess’s real name) disappears, Rachel tells the police what she saw, but because Rachel is a deeply depressed alcoholic who often experiences blackouts, they don’t take her seriously. Still, she keeps inserting herself into the case, intertwining her life with those of Anna and Megan. What really happened the night Megan disappeared? The deeper Rachel digs, the closer she gets to a dangerous truth that binds all three women together.

While these three women’s narratives were unreliable, as a reader I found that my own feelings about the characters were just as unreliable. I went from occasionally feeling bad for Rachel, whose alcoholism has cost her so much, to thinking that she is a self-obsessed maniac who is destroying others’ lives. My feelings for Anna and Megan were just as ambivalent.

Is Anna just trying to be a good wife and mother while being harassed by her husband’s unstable ex, or is that persona a cover for something less wholesome? Who is Megan really, and what secrets does her murky past hold? Not only could I not trust what they were each saying, but I also couldn’t make up my mind about them as people. As I read, I felt like a psychiatrist and a detective, digging through the complex web of their conflicting but related narratives to try to find the truth.

Ultimately, THE GIRL ON THE TRAIN is a fascinating examination of the ways we view and judge the lives of others; it’s about the stories we make up about other people and the ones we make up about ourselves. It’s a novel of obsession and addiction, the subjectivity of memory, and the complexity of people’s motives. Rachel, Megan, and Anna are untrustworthy, unreliable, and unlikable, but you won’t be able to tear yourself away from their story until its breathless conclusion.

The Girl on the Train
by Paula Hawkins 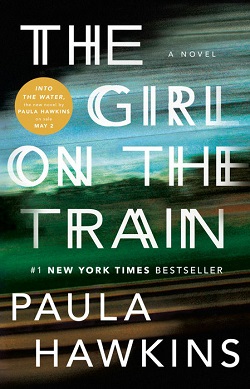 |+| Add to Your Shelf
The Girl on the Train
Paula Hawkins

On her daily train ride, Rachel witnesses something shocking among the stretch of cozy suburban homes she once brazenly surveyed. She involves the police and is irrevocably entangled in the mess that unfolds. An obsessive read with captivating unreliable narration, GIRL ON THE TRAIN is a stunning Hitchcockian debut.

Under Cover with Off the Shelf: A Behind-the-Scenes Look at 14 Beautiful Books

Love a Good Unreliable Narrator? How About Three?