One effect of being an avid reader is that almost everything reminds me of a book. I’ll see a story on the news about a prison break and think,“That’s just like Rita Hayworth and Shawshank Redemption.” Anytime someone mentions taking a break from Facebook or Twitter, I think of The Illustrated Man. Every mention of King Arthur and his knights triggers memories of The Mists of Avalon. Recently, I was watching the first episode of Unbreakable Kimmy Schmidt and I thought to myself,“This really makes me want to reread The Never List.” It was a weak connection, since Kimmy Schmidt is a comedy and The Never List is a psychological thriller, but diving back into Koethi Zan’s smart, gripping novel was an excellent idea—I ditched the show and spent several sleepless evenings feverishly reading instead.

Sarah and her best friend, Jennifer, were cautious teenagers—they kept a running “Never List” of things never to do for safety’s sake, like accepting a ride from a stranger or walking home alone late at night. But after a single fateful cab ride, the girls were kidnapped by a vicious sadist and imprisoned in a cellar along with two other women. Three years later, Sarah was able to escape and the captives were rescued. Now, ten years after they were kidnapped, Sarah has become an agoraphobe, never leaving her apartment as she struggles to deal with her trauma and the fact that Jennifer didn’t make it out alive. But Jennifer’s body was never recovered and their captor, Jack Derber, couldn’t be charged with murder. Now that he is up for parole, Sarah makes a drastic decision—she is going to embark on a cross-country journey to find conclusive evidence that will put Derber away for good. Along the way, she’ll need the help of her fellow survivors, Tracy and Christine, who, while struggling with demons of their own, also hold deep grudges against Sarah for what happened in that cellar. What they discover is that their suffering was just the beginning, and Derber’s dealings were darker than anything they could have imagined.

The Never List is one of those books that makes you miss your subway stop and keeps you up all night because at the end of every chapter, you convince yourself you have time for just one more. As the novel follows Sarah’s investigation, it also gradually reveals what happened in the cellar and why the others hate Sarah so much. In many novels that progress in multiple timelines, I find that one story line interests me more than the other, and I am tempted to skip sections. This is not the case with The Never List. The past builds on the present seamlessly, filling in gray areas and fleshing out characters but also telling a breathlessly intense story in itself. I read so many thrillers that I can usually see twists coming from a mile away, but the stream of revelations are so startling and the twists so breathtaking that this novel had me truly shocked.

What makes this book so special is the rare combination of a blisteringly fast plot-driven mystery that is also an insightful character study. Zan has crafted three complex and multidimensional characters in Sarah, Tracy, and Christine. These women offer a remarkable look at the human psyche and how it deals with debilitating trauma. Until her brave decision to crack open the case against her captor, Sarah has coped by turning inward—she has cocooned herself in her New York apartment, which serves as a haven of sameness and control, and has cut off physical contact with other humans. Tracy has attempted to face her trauma head-on, educating herself on Jack Derber’s philosophy and using it to affect change through her radical feminist newsletter. Perhaps most surprisingly of all, Christine has changed her name and started an entirely new life. No one, from her friends to her husband and children, knows who she really is or what she has been through. But as their investigation gets closer to the horrifying truth, each woman breaks down in her own way. We are confronted with the fact that while none of them have truly moved on, the human spirit is remarkably resilient. These are characters that will remain in your thoughts long after you’ve turned the last page.

The Never List is the kind of book that holds you captive from the first moment and won’t let go—no pun intended. So, if you dare to make a thrilling descent into the depths of evil, clear your schedule and crack open The Never List. 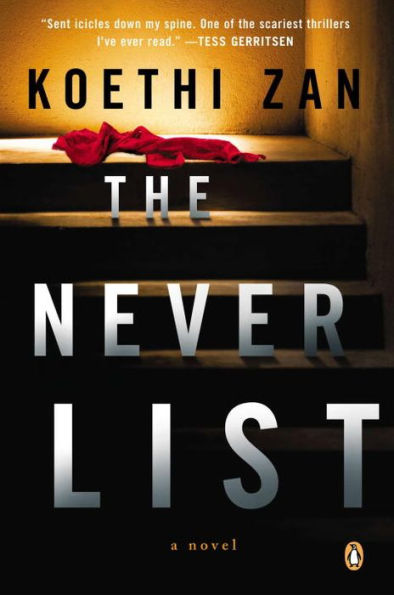 |+| Add to Your Shelf
The Never List
Koethi Zan

Ten years after accepting a cab ride with grave and everlasting consequences, Sarah is still struggling to resume a normal life. When her abductor is up for parole, she decides to confront her phobias. If you love haunted but determined female protagonists, you'll love Koethi Zan's tale of a kidnap survivor unraveling the mystery of her horrifying past.

An Up-All-Night Thriller That Holds You Captive