It all begins with a chance encounter between an unnamed narrator and an aging carnie whose skin is carefully covered despite the hot weather. They sit companionably under a tree for a while, until finally the stranger uncovers himself: Removing his shirt, he reveals vivid, lifelike tattoos covering his entire body. But they aren’t tattoos, he explains, they are Illustrations, given to him by a mysterious old woman years before. He wears the Illustrations like the black mark of a curse; he cannot keep a job or a home and is never able to stay among people for long. Pressed by the narrator, the Illustrated man explains that the old crone was a witch and the Illustrations are magic—they come to life at night and play out their small, frightening dramas on the canvas of his skin. Some are violent, some sad, and all surround the one blank place on his back—a place that will slowly resolve itself into a glimpse of the observer’s future if one looks long enough. As the Illustrated man lays back under the stars and tries to relax—he cannot sleep because he “can feel them, the pictures, like ants, crawling on [his] skin”—the narrator watches as the eighteen Illustrations tell their eighteen tales. These tales comprise Ray Bradbury’s The Illustrated Man.

Bradbury is perhaps one of the most widely recognized and celebrated American science fiction writers of all time. Best known for the classic Fahrenheit 451, he is also the author of hundreds of short stories. His body of work is luminous and transportive throughout, but my favorite short story collection of his is The Illustrated Man. The collection of eighteen stories is an ingenious frame narrative, connected by the tragic and wondrous story of the titular character himself.

Each tale is a self-contained universe, whether it takes place on Venus or Mars or even right here on Earth. The remarkable thing about Bradbury’s work is that it is deeply rooted in the genre of science fiction—these are, to the last, tales about futuristic technology and space travel and alien creatures and lands—but it delves deeper than that. Each of these stories is a keenly observed study of human nature. A story about Christian missionaries attempting to minister to Orb-creatures on Mars explores faith, the inherent egotism and ulterior motives underlying religious missions, and the desires for self-aggrandizement and glory that lurk within us all—even priests. The tale of a group of shipwrecked astronauts searching for shelter from the relentless Venusian rains explores hope and despair and how much abuse the human psyche can take before it breaks. A rocket-man home from his missions for a three-day visit with his wife and son explores the dichotomy between following one’s dreams and accepting responsibilities, as well as the restlessness of the human spirit.

In my personal favorite story of the collection, parents worry that the expensive smart-house and automated nursery they purchased for their children have gone too far. With the house making all of their food instantly, bathing them, and even singing and rocking them to sleep, the parents have begun to feel useless, bored, and obsolete. How can they compete with the technology that pampers and cares for their children every day? They are dull compared to the children’s magnificent nursery, a feat of futuristic engineering that transports the children into a lush virtual reality of whatever setting they choose, from Never-Never Land to magical castles to the childrens’ alarming new favorite—the stark and violent African veldt. When the bloodthirsty lions of the veldt begin to feel a little too real, the parents begin to wonder if their children are plotting to do away with them for good. This story fascinates me because it feels like a near-future dilemma: When does technology cross the line from making our lives easier to making our lives empty and disconnected? At one point, the parents talk about turning off the house and taking a “vacation” from it; people already take no-technology vacations (to a lesser degree, of course), “unplugging” from electronics and the social media that dominate so much of our lives. Is Bradbury’s smart-house world where we are headed?

So, read The Illustrated Man for the insight, the interplanetary hijinks, and for a subtle reminder to live your life—and not allow technology to live it for you.

The Illustrated Man
by Ray Bradbury 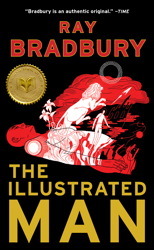 |+| Add to Your Shelf
The Illustrated Man
Ray Bradbury

The Sophomore Slump Is a Myth: 8 Second Novels You Need to Read

A Definitive Reading List for Fans of the S-Town Podcast

The Future is Now: Did Ray Bradbury’s Sci-Fi Short Stories Predict the Present?