Long dismissed as a dark age, the Middle Ages (roughly 500 to 1500) were actually a time of astonishing upheaval, colorful legends, the 12th-century renaissance, and innovations that still resonate today. The novels below explore some of the most incredible stories of the era, from the Anglo-Saxon and Norse invasions of Britain to the polymaths of the Islamic Golden Age, and will effortlessly transport you to Tuscan villas, the highlands of Scotland, and beyond. 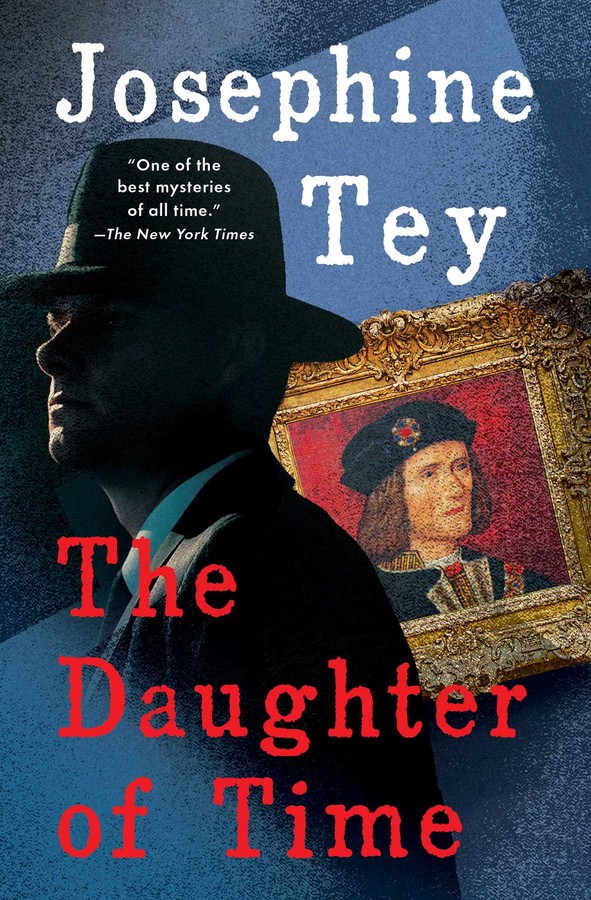 |+| Add to Your Shelf
The Daughter of Time
by Josephine Tey

King Richard III was made famous by Shakespeare as the dastardly murderer of his nephews in his quest for the English throne. But in THE DAUGHTER OF TIME, when a Scotland Yard inspector, stuck in bed with a broken leg, decides to investigate this allegation, he discovers a compelling mystery that soon obsesses him. A classic and unputdownable novel that has inspired generations, THE DAUGHTER OF TIME is a thoroughly unique and compelling detective tale that will change the way you look at history.

|+| Add to Your Shelf
The Daughter of Time
Josephine Tey

"One of the best mysteries of all time" (The New York Times)—Josephine Tey recreates one of history’s most famous—and vicious—crimes in her classic bestselling novel, a must read for connoisseurs of fiction, now with a new introduction by Robert Barnard.

Inspector Alan Grant of Scotland Yard, recuperating from a broken leg, becomes fascinated with a contemporary portrait of Richard III that bears no resemblance to the Wicked Uncle of history. Could such a sensitive, noble face actually belong to one of the world’s most heinous villains—a venomous hunchback who may have killed his brother’s children to make his crown secure? Or could Richard have been the victim, turned into a monster by the usurpers of England’s throne? Grant determines to find out once and for all, with the help of the British Museum and an American scholar, what kind of man Richard Plantagenet really was and who killed the Little Princes in the Tower.

The Daughter of Time is an ingeniously plotted, beautifully written, and suspenseful tale, a supreme achievement from one of mystery writing’s most gifted masters.

The 10 Most Popular Books of April 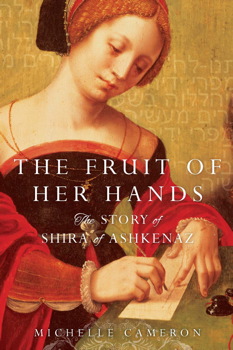 An unforgettable tale of Jewish history, THE FRUIT OF HER HANDS explores the life of Shira, the intelligent and devoted wife of famous scholar Meir ben Baruch of Rothenberg, Germany. From her childhood, when she was raised by a rabbi and a Christian maid, to the deadly rise of anti-Semitism in Europe, Shira must reconcile her own understanding of the two religions while also raising a family and preserving her traditions. A moving and epic novel.

|+| Add to Your Shelf
The Fruit of Her Hands
Michelle Cameron

Based on the life of the author’s thirteenth-century ancestor, Meir ben Baruch of Rothenberg, a renowed Jewish scholar of medieval Europe, this is the richly dramatic fictional story of Rabbi Meir’s wife, Shira, a devout but rebellious woman who preserves her religious traditions as she and her family witness the rise of anti-Semitism in Europe.

Raised by her widowed rabbi father and a Christian nursemaid in Normandy, Shira is a free-spirited, inquisitive girl whose love of learning shocks the community. When Shira’s father is arrested by the local baron intent on enforcing the Catholic Church’s strictures against heresy, Shira fights for his release and encounters two men who will influence her life profoundly—an inspiring Catholic priest and Meir ben Baruch, a brilliant scholar. In Meir, Shira finds her soulmate.

Married to Meir in Paris, Shira blossoms as a wife and mother, savoring the intellectual and social challenges that come with being the wife of a prominent scholar. After witnessing the burning of every copy of the Talmud in Paris, Shira and her family seek refuge in Germany. Yet even there they experience bloody pogroms and intensifying anti-Semitism. With no safe place for Jews in Europe, they set out for Israel only to see Meir captured and imprisoned by Rudolph I of Hapsburg. As Shira weathers heartbreak and works to find a middle ground between two warring religions, she shows her children and grandchildren how to embrace the joys of life, both secular and religious.

Vividly bringing to life a period rarely covered in historical fiction, this multi-generational novel will appeal to readers who enjoy Maggie Anton’s Rashi’s Daughters, Brenda Rickman Vantrease’s The Illuminator, and Geraldine Brooks’s People of the Book.

|+| Add to Your Shelf
The Norse Queen
by Johanna Wittenberg

Based on the Norse sagas of the Viking age, THE NORSE QUEEN is a resplendent and exhilarating novel about a woman determined to follow her dreams. But when her father is killed and her people slaughtered, she will stop at nothing to avenge her father’s death, protect her kingdom, and achieve ultimate power.

|+| Add to Your Shelf
The Norse Queen
Johanna Wittenberg

|+| Add to Your Shelf
The Kingmaker's Daughter
by Philippa Gregory

When you’re the daughter of one of the most powerful men in the kingdom, your life is destined to be extraordinary. In this gripping and atmospheric novel from the author of TIDELANDS, Anne Neville grows from young princess to widow and, finally, to queen all within a short time. Her astonishing story is revealed with Philippa Gregory’s signature transportive prose and suspenseful twists and turns.

|+| Add to Your Shelf
The Kingmaker's Daughter
Philippa Gregory

Anne Neville is a beautiful young woman who must navigate the treachery of the English court while her father, known as “the Kingmaker,” uses her and her sister as pawns in his political game. 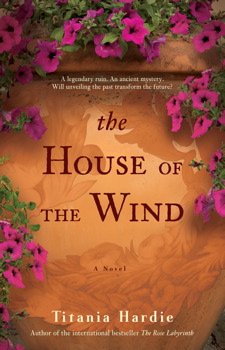 From present-day San Francisco to 14th-century Tuscany, this heartrending emotionally compelling and engaging novel explores love, loss, and healing amid a centuries-old Italian mystery. Following the stories of two women in different time periods, each struggling with her own sorrows, THE HOUSE OF THE WIND pulls back the curtain on a legendary villa teeming with history and myth.

|+| Add to Your Shelf
The House of the Wind
Titania Hardie

The internationally bestselling author of The Rose Labyrinth returns with a love story of magic and healing that takes readers from the heartache of a young human rights lawyer in present-day San Francisco to the lives of a courageous trio of women in medieval Tuscany.

A legendary ruin. An ancient mystery. Will unveiling the past transform the future?

San Francisco, 2007. Madeline Moretti is grieving after her fiancé's death. Nothing brings her joy any more, and Maddie’s grandmother, a fiery Italian, sends her to Tuscany to heal. Here, Maddie is immersed in the mystery of a ruined villa. Destroyed centuries ago in a legendary storm on the Eve of St. Agnes, it has been known ever since as the Casa al Vento—the House of the Wind.

Tuscany, 1347. Mia hasn’t spoken since her mother’s death and lives in silence with her beloved aunt. One dark night, a couple seeks refuge in their villa. Accustomed to welcoming passing pilgrims, Mia is entranced by the young bride’s radiance and compassion but mystified by her reluctance to reveal even her name. Where has she come from, and why must her presence be a secret?

Centuries apart, each searching for a way to step into her future, both Mia and Maddie will be haunted by the myth of the young woman who walked unscathed from the ruins of the House of the Wind. 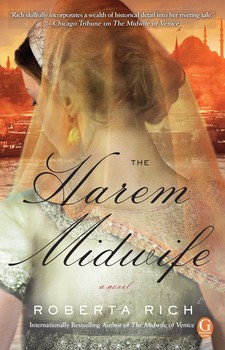 |+| Add to Your Shelf
The Harem Midwife
by Roberta Rich

You’ll find yourself transported to the capital of the Ottoman Empire in this atmospheric sequel to THE MIDWIFE OF VENICE. Hannah Levi, the best midwife in Constantinople, has a difficult choice to make. Should she risk everything to help a Jewish peasant girl? When a remarkable stranger arrives, her comfortable life is disrupted even further in this unputdownable and engaging novel.

|+| Add to Your Shelf
The Harem Midwife
Roberta Rich

An opulent, riveting, and suspenseful continuation of the thrilling historical novel The Midwife of Venice set in medieval Constantinople.

AN OPULENT, CAPTIVATING, AND SUSPENSEFUL HISTORICAL NOVEL FROM THE AUTHOR OF THE THRILLING INTERNATIONAL BESTSELLER THE MIDWIFE OF VENICE

The Imperial Harem, Constantinople, 1578. Hannah and Isaac Levi, Venetians in exile, have overcome unfathomable obstacles to begin life anew in the Ottoman Empire. He works in the growing silk trade, and she, the best midwife in the capital, tends to the hundreds of women in Sultan Murat III’s lively and infamous harem. One night, Hannah is unexpectedly sum­moned to the extravagant palace and confronted with Leah, a Jewish peasant girl who was violently abducted. The sultan favors Leah as his next conquest and wants her to produce his heir, but if the spirited girl fails an important test, she faces a terrible fate. Taken by Leah’s tenacity, Hannah risks everything to help her. But as Hannah agonizes over her decision, an enchanting stranger arrives from afar to threaten her peaceful life with Isaac, and soon Leah too reveals a dark secret that could condemn them both.

|+| Add to Your Shelf
The Lost Queen
by Signe Pike

This first book in a spellbinding and lyrical trilogy follows Languoreth, a queen in medieval Scotland, as she battles tremendous change. As the rise of Christianity and Anglo-Saxon invasions threaten her homeland, she discovers a passion she never imagined. With her twin brother, the future Arthurian wizard Merlin, she must do everything she can to preserve her way of life.

10 Historical Fantasy Reads to Sweep You Off Your Feet

|+| Add to Your Shelf
The Rebel Nun
by Marj Charlier

Clotild—the illegitimate daughter of a king who lives in an all-female monastery—is determined to become an abbess, but when a bishop prevents her and takes over the monastery, she knows she has no choice. Together with her fellow nuns, she stages a rebellion, risking excommunication and even death, all in the name of equality and faith. Based on the life of an actual woman from the late 500s, THE REBEL NUN is a thrilling and stirring novel.

|+| Add to Your Shelf
The Rebel Nun
Marj Charlier

|+| Add to Your Shelf
The Physician
by Noah Gordon

When an English orphan wishes to become a healer, he decides to study at the world-renowned medical schools in Persia. He embarks on a perilous and life-changing adventure to the Middle East, studying under one of the most famous icons of the Islamic Golden Age. While hiding his true identity and falling in love, can he survive in an unfamiliar land and achieve his dreams?

|+| Add to Your Shelf
The Physician
Noah Gordon

|+| Add to Your Shelf
The Last Kingdom
by Bernard Cornwell

The first volume in the epic saga that inspired a Netflix series, THE LAST KINGDOM follows the bloody battles between the Saxons and the invading Danes in ninth- and tenth-century England. When a captured nobleman is betrayed by the Vikings who raised him, he must determine which side of the conflict he is on, unaware that his choices could change the course of history.

|+| Add to Your Shelf
The Last Kingdom
Bernard Cornwell