Summer is marked as the time to kick back, relax, and indulge in the finer things in life—and in our opinion, that obviously includes reading! As we dive deeper into the summer months, our TBR list is growing longer than ever. If you’re stumped on which books to slip into your beach bag or carry with you on your summer walks, check out some of the titles we’ll be devouring this season. 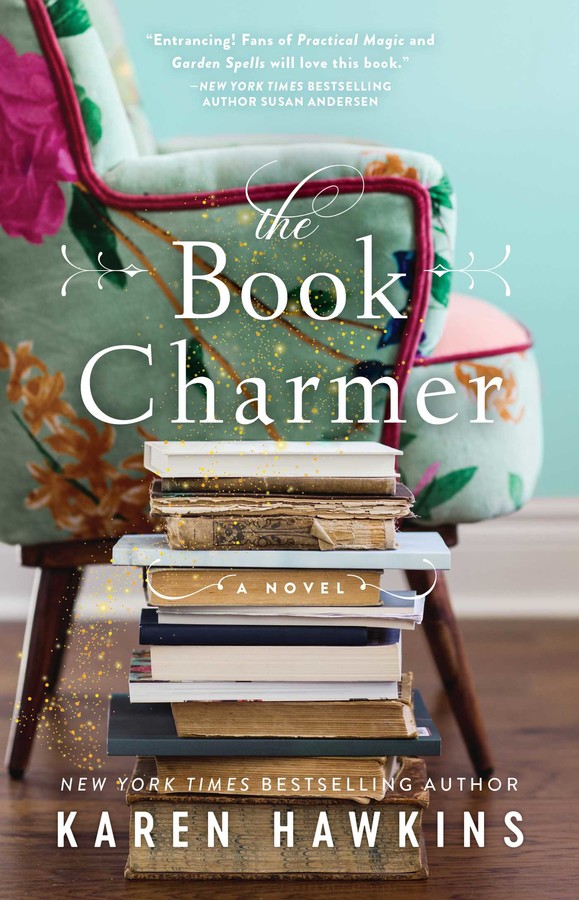 |+| Add to Your Shelf
The Book Charmer
by Karen Hawkins

Holly’s Pick #1:  This summer, I’m excited to read Karen Hawkins’s THE BOOK CHARMER, a beautiful book with what sounds like a heartwarming plot. Sarah Dove has a way with books. To her, the pages live, breathe, and even talk to her. So when Sarah grows up to become the librarian in her small Southern town of Dove Pond, her gift helps place every book in the hands of the perfect reader. Recently, however, the books have been whispering about something out of the ordinary: the arrival of a displaced city girl named Grace Wheeler. If the books are right, Grace could be the savior that Dove Pond desperately needs. In her quest, Sarah discovers the tantalizing promise of new love, the deep strength that comes from having a true friend, and the power of finding just the right book.

|+| Add to Your Shelf
The Book Charmer
Karen Hawkins

Sarah Dove is no ordinary bookworm. To her, books have always been more than just objects: they live, they breathe, and sometimes they even speak. When Sarah grows up to become the librarian in her quaint Southern town of Dove Pond, her gift helps place every book in the hands of the perfect reader. Recently, however, the books have been whispering about something out of the ordinary: the arrival of a displaced city girl named Grace Wheeler.

If the books are right, Grace could be the savior that Dove Pond desperately needs. The problem is, Grace wants little to do with the town or its quirky residents—Sarah chief among them. It takes a bit of urging, and the help of an especially wise book, but Grace ultimately embraces the challenge to rescue her charmed new community. In her quest, she discovers the tantalizing promise of new love, the deep strength that comes from having a true friend, and the power of finding just the right book.

“A mesmerizing fusion of the mystical and the everyday” (Susan Andersen, New York Times bestselling author), The Book Charmer is a heartwarming story about the magic of books that feels more than a little magical itself. Prepare to fall under its spell.

The 10 Most Popular Books Trending This May

6 Books as Refreshing as an Ocean Breeze

Holly’s Pick #2: Anyone who knows me knows how much I love France. Its quaint cobblestone streets, breathtaking views, and rich historical charm have captured my heart. That’s why I can’t wait to sink into this story about the historical drama of World War II in Paris. Author Kristin Harmel tells this story through the perspectives of a young newlywed American woman, a British RAF pilot, and a teenage Jewish girl all living in Paris. This romantic novel will have you falling in love with both France and its characters.

|+| Add to Your Shelf
The Room on Rue Amélie
Kristin Harmel

|+| Add to Your Shelf
All About Love
by bell hooks

Sharon’s Pick:  I've been wanting to read a book by bell hooks since I first heard about her in college, and I finally bought her book ALL ABOUT LOVE from Semicolon Bookstore & Gallery, Chicago’s only black woman-owned bookstore and gallery. ALL ABOUT LOVE is the first volume in hooks’ "Love Song to the Nation," and it discusses rethinking the concept of self-love in addition to the importance of love in healing divisions between individuals, communities, and society.

|+| Add to Your Shelf
All About Love
bell hooks

|+| Add to Your Shelf
Shakespeare for Squirrels
by Christopher Moore

Kerry’s Pick:  Sometimes you just need a little bit of good news to look forward to. For me, hearing that the great Christopher Moore was releasing a third novel starring Pocket—the Fool from King Lear who has spent two hilarious novels unashamedly turning the Bard’s masterpieces on their heads—was a little like a summertime Christmas present. I’ve written about my deep love for the Fool and Pocket here on Off the Shelf before, and I’m sure SHAKESPEARE FOR SQUIRRELS will only deepen this odd fixation. With our snarky, petite, and bewildered hero at the helm, this bawdy and witty retelling of A MIDSUMMER NIGHT’S DREAM will be unlike any other and will prove that the play’s famous quote is quite true: “Lord, what fools these mortals be!”

|+| Add to Your Shelf
Shakespeare for Squirrels
Christopher Moore

Sarah Jane’s Pick:  This book has been on my pile for a long time, and so many people have raved about it. The current social isolation situation seems an appropriate time to read this book about Eleanor, a loner who avoids social interactions until she meets a bumbling IT guy from her office. Together they help an elderly man who has fallen on the sidewalk, leading to the three of them forming a friendship. A warm, uplifting story is just what I need. 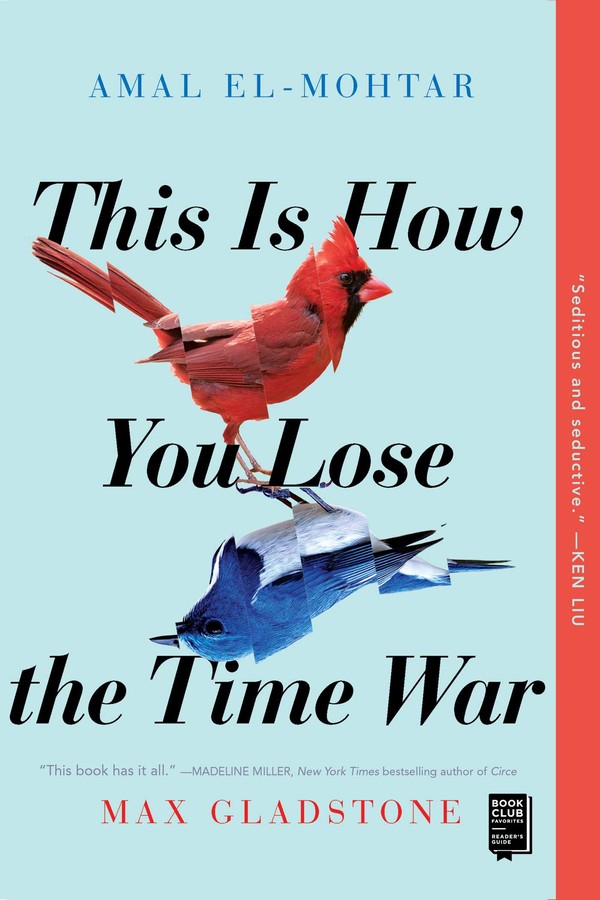 Holly’s Pick #3:   I’m excited to add a bit of science fiction to my literary diet with THIS IS HOW YOU LOSE THE TIME WAR. Set in a dystopian world embroiled in a time war, this story follows two time-traveling rivals who fall in love and must change the past to ensure their future. What begins as a correspondence between two agents from warring factions who are exchanging battlefield boasts becomes something significantly more. But if their bond is discovered, it could mean both their deaths.

From award-winning authors Amal El-Mohtar and Max Gladstone comes an enthralling, romantic novel spanning time and space about two time-traveling rivals who fall in love and must change the past to ensure their future.

Among the ashes of a dying world, an agent of the Commandment finds a letter. It reads: Burn before reading.

Thus begins an unlikely correspondence between two rival agents hellbent on securing the best possible future for their warring factions. Now, what began as a taunt, a battlefield boast, becomes something more. Something epic. Something romantic. Something that could change the past and the future.

Except the discovery of their bond would mean the death of each of them. There’s still a war going on, after all. And someone has to win. That’s how war works, right?

Cowritten by two beloved and award-winning sci-fi writers, This Is How You Lose the Time War is an epic love story spanning time and space.

Books as Lifeboats: 6 Novels That Carried Us through the Last Year

|+| Add to Your Shelf
Mexican Gothic
by Silvia Moreno-Garcia

Hannah’s Pick #1:  I absolutely cannot wait to pick up MEXICAN GOTHIC. I read Silvia Morena-Garcia’s book GODS OF JADE AND SHADOW last summer and fell in love with her writing. (If you haven’t read it yet, I highly recommend this gorgeous, fantastical novel that weaves folklore into a story about a girl in 1920s Mexico). When I saw she was writing a gothic horror novel set in Mexico in the 1950s, I didn’t ask any more questions and immediately added it to my TBR. The novel follows Noemi, a chic debutante who goes to a house in the countryside to rescue her newlywed cousin from something mysterious. When she arrives, she meets her cousin’s menacing husband, and begins having nightmares about the house she’s staying in. As the book progresses, she gets wrapped up in family secrets, madness, and the house’s seductive nature. I can’t wait for the creepiness and suspense that I’m sure I’m going to get, along with Moreno-Garcia’s gorgeous storytelling.

8 Mesmerizing Gothic Novels to Read While the Winter Winds Blow

|+| Add to Your Shelf
Sabrina & Corina
by Kali Fajardo-Anstine

Hannah’s Pick #2:  This National Book Award Finalist was on the top of my summer reading list, and I am both very happy and a little nervous that I picked it up first—it is so incredible it might send me into a reading lull for a while after! As of now, I’m halfway through, and I’m taking my time so I can savor every minute. This powerhouse book is a collection of short stories about Latina characters with indigenous ancestry and their experiences living in Colorado. In one of the stories, two cousins are inseparable as children but grow slowly apart as they age. In another story, two sisters living together go on dates with white men, and one sister ends up blind. In a third, a young girl has to care for a bag of sugar as if it’s a baby, while her mother comes in and out of her life. These stories are heartbreaking and powerful. Kali Fajardo-Anstine’s writing is magnetic, and the characters feel so real they almost pop right off the page. There’s emotion in every sentence, and each story has left me thinking about abandonment, what “home” is (or where it is), and the strength that women carry within.