No matter where you make yourself comfortable this summer, these are some of the books I suggest to keep you company! So grab your sunscreen and a cool beverage, and enjoy some of my summer picks. 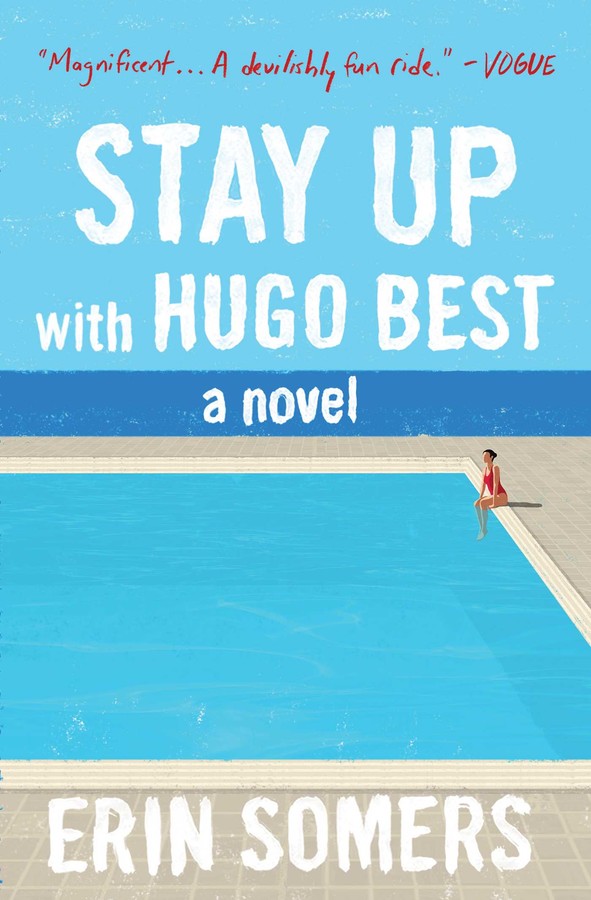 June Bloom finds herself unemployed when her boss, talk show host Hugo Best, retires. Happenstance throws them back together over Memorial Day weekend in New York City in this archly observed debut novel from Somers. I was over the moon to host this author on my podcast (Top Shelf at Merrick Library), and honestly, I had to stop fangirling.

|+| Add to Your Shelf
Stay Up with Hugo Best
Erin Somers

June Bloom is twenty-nine, broke, and an aspiring comedy writer. Hugo Best is a beloved late-night TV icon and notorious womanizer who invites her to his mansion for Memorial Day weekend. This is the story of their four days together, a “zippy…magnificent…devilishly fun ride” (Vogue).

When June Bloom, an assistant on the late-night comedy show, Stay Up with Hugo Best, runs into Hugo himself at an open mic following his unexpected retirement, she finds herself fielding a surprising invitation: Hugo asks June to come to his mansion in Greenwich for the long Memorial Day weekend. “No funny business,” he insists. “Incisive, funny, and tinged with melancholy, this timely novel follows two lost but clever souls desperate for connection” (Entertainment Weekly).

June, in need of a job and money, but harboring the remains of a childhood crush on the charming older comedian and former role model, is confident she can handle herself. She accepts. As the weekend unfolds and the enigmatic Hugo gradually reveals appealingly vulnerable facets to his personality, their dynamic proves to be much more complicated and less predictable than June imagined.

Librarian Picks: 9 Delightful Books to Read Under the Summer Sky

|+| Add to Your Shelf
Less
by Andrew Sean Greer

When you look up the word joy in the dictionary, “Less” should be the definition. Arthur Less is about to turn fifty and finds himself despondent over where he is in life. Don’t just read this book because it won the Pulitzer Prize, in 2018. Read it because it is excellent and beautiful and funny and heartbreaking and . . . I loved every single bit of it. I’m looking at you, book club discussion groups! (Note: I am shamelessly shilling for Andrew Sean Greer to be on my podcast. Shamelessly.)

Since you’ll have to wait until September to read Bill Clegg’s THE END OF THE DAY—and it is terrific—it’s worth revisiting his debut novel, DID YOU EVER HAVE A FAMILY. Tragedy strikes the family of June Reid the day before her daughter’s wedding . . . The way Clegg handles this story is nothing short of beautiful. It knocked me off my feet.

DID YOU EVER HAVE A FAMILY asks how one goes on after the worst happens. This tender novel shows how we are all connected and how that very connection is the basis for redemption and hope. We won’t lie; you might need Kleenex for this one.

10 Books with Characters Who Feel Like Family by the End

8 National Book Award Nominated Authors You Should Be Reading

How to Pack for the Perfect Bookish Vacation

|+| Add to Your Shelf
The Distant Dead
by Heather Young

A truly satisfying page-turner. A middle-schooler living in a small Nevada town discovers his math teacher murdered—so begins this atmospheric and twisty mystery. The characters will stay with you long after the book ends.

|+| Add to Your Shelf
The Distant Dead
Heather Young

|+| Add to Your Shelf
Nothing to See Here
by Kevin Wilson

From page one, this book explores the perils of parenthood but with a twist that, oddly enough, works, and it becomes a most endearing story. Lillian gets a call from her best college pal, Madison, with a job offer like no other . . .

|+| Add to Your Shelf
Nothing to See Here
Kevin Wilson 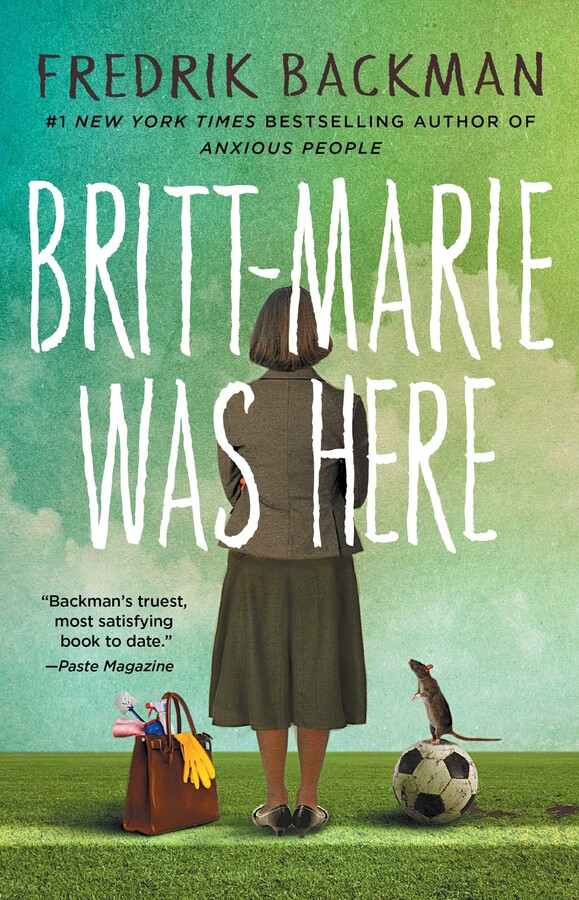 |+| Add to Your Shelf
Britt-Marie Was Here
by Fredrik Backman

If you’re like me, you’ll read anything by Frederik Backman. His latest, ANXIOUS PEOPLE, hits shelves in September, so this summer is the perfect time to go back and read BRITT-MARIE WAS HERE. Backman has an uncanny way of writing about the loneliness we all have felt at one time or another, and he does it with astonishing clarity and optimism. Britt-Marie is all of us: we are not alone.

|+| Add to Your Shelf
Britt-Marie Was Here
Fredrik Backman

The New York Times bestselling author of A Man Called Ove and My Grandmother Asked Me to Tell You She’s Sorry “returns with this heartwarming story about a woman rediscovering herself after a personal crisis…fans of Backman will find another winner in these pages” (Publishers Weekly).

Britt-Marie can’t stand mess. A disorganized cutlery drawer ranks high on her list of unforgivable sins. She is not one to judge others—no matter how ill-mannered, unkempt, or morally suspect they might be. It’s just that sometimes people interpret her helpful suggestions as criticisms, which is certainly not her intention.

But hidden inside the socially awkward, fussy busybody is a woman who has more imagination, bigger dreams, and a warmer heart that anyone around her realizes.

When Britt-Marie walks out on her cheating husband and has to fend for herself in the miserable backwater town of Borg—of which the kindest thing one can say is that it has a road going through it—she finds work as the caretaker of a soon-to-be demolished recreation center. The fastidious Britt-Marie soon finds herself being drawn into the daily doings of her fellow citizens, an odd assortment of miscreants, drunkards, layabouts. Most alarming of all, she’s given the impossible task of leading the supremely untalented children’s soccer team to victory. In this small town of misfits, can Britt-Marie find a place where she truly belongs?

Funny and moving, sweet and inspiring, Britt-Marie Was Here celebrates the importance of community and connection in a world that can feel isolating.

|+| Add to Your Shelf
Providence
by Max Barry

Max Barry’s latest takes you right out of your armchair and into deep space aboard the very expensive warship, PROVIDENCE. Built to protect Earth from an alien threat, four members of the crew really do go where no person has gone before. I was absolutely riveted; you will be too. 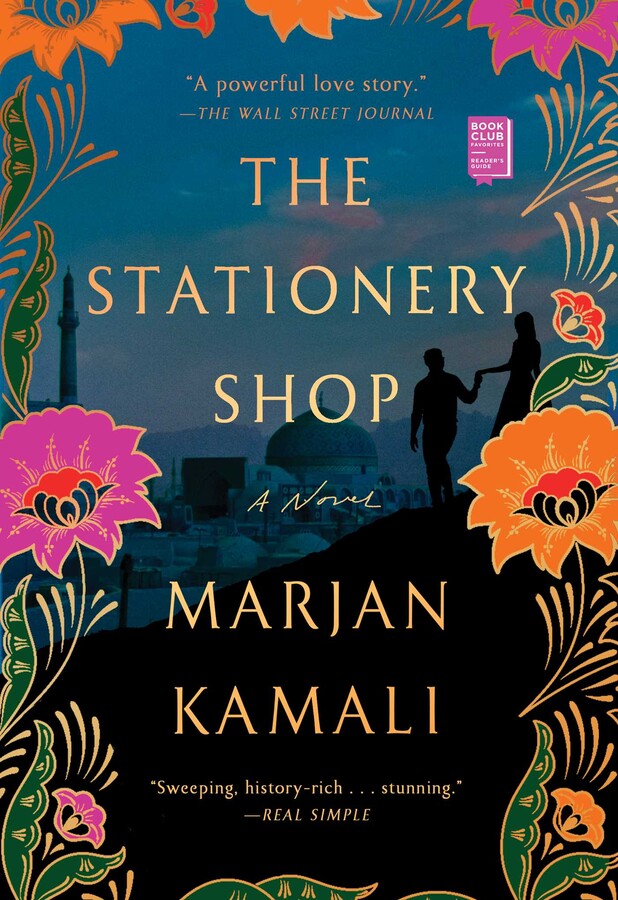 |+| Add to Your Shelf
The Stationery Shop
by Marjan Kamali

That perfect immersive experience, that will keep you glued to your chair or beach towel, or wherever you find yourself. Historical fiction mixed with a beautiful love story.

|+| Add to Your Shelf
The Stationery Shop
Marjan Kamali

A poignant, heartfelt new novel by the award-nominated author of Together Tea—extolled by the Wall Street Journal as a “moving tale of lost love” and by Shelf Awareness as “a powerful, heartbreaking story”—explores loss, reconciliation, and the quirks of fate.

Roya, a dreamy, idealistic teenager living amid the political upheaval of 1953 Tehran, finds a literary oasis in kindly Mr. Fakhri’s neighborhood stationery shop, stocked with books and pens and bottles of jewel-colored ink.

Then Mr. Fakhri, with a keen instinct for a budding romance, introduces Roya to his other favorite customer—handsome Bahman, who has a burning passion for justice and a love for Rumi’s poetry—and she loses her heart at once. Their romance blossoms, and the little stationery shop remains their favorite place in all of Tehran.

A few short months later, on the eve of their marriage, Roya agrees to meet Bahman at the town square when violence erupts—a result of the coup d’etat that forever changes their country’s future. In the chaos, Bahman never shows. For weeks, Roya tries desperately to contact him, but her efforts are fruitless. With a sorrowful heart, she moves on—to college in California, to another man, to a life in New England—until, more than sixty years later, an accident of fate leads her back to Bahman and offers her a chance to ask him the questions that have haunted her for more than half a century: Why did you leave? Where did you go? How is it that you were able to forget me?

Rediscovered Reviews: 10 Historical Fiction Reads to Get Lost In

17 Bookish Holiday Gift Ideas to Delight Your Loved Ones

|+| Add to Your Shelf
The Vanishing Half
by Britt Bennett

Bennet takes readers on an absolutely remarkable journey with identical twin sisters. Families, the things we do for love, for ourselves... Bennet writes like a dream.

|+| Add to Your Shelf
The Vanishing Half
Britt Bennett