Books, like people, come in and out of our lives at certain times and always for a specific purpose. Unfortunately, books aren’t sentient creatures (yet), and sometimes their timing is off. Occasionally you have to give a book—or a person—a second chance at a later time to fully appreciate what they’re offering.

This has happened to me several times in my life with a variety of books, some of which I’ve mentioned in earlier Off the Shelf reviews. My most recent example of revisiting an old book and realizing, Oh, this actually means something to me now, is GOOD OMENS by Neil Gaiman and Terry Pratchett.

I first read this cult classic about an angel and a demon incompetently attempting to prevent Armageddon several years ago and found it amusing, but quickly moved on. Years passed and I heard Amazon Prime was adapting GOOD OMENS and had to admit that, with Michael Sheen and David Tennant as angel Aziraphale and demon Crowley, respectively, it had perfect casting. On a visit home, I impulsively put it on while searching for something to watch with my mom. Neither of us expected to fall in love.

Finishing the miniseries in record time, I was reintroduced to these colorful characters and had the urge to revisit the novel. I dug up my old e-reader, plugged it in, and immediately devoured the novel in a few days. I realized something while reading this fanciful tale of doomsday, the Antichrist, witchcraft, and Queen—there wasn’t anything wrong with GOOD OMENS when I first read it. It was simply the wrong time in my life to truly appreciate it.

When I first read this novel about the apocalypse, I was in the beginning of what felt like my own personal end of the world. I was dealing with the fact that I was a recent (and jobless) graduate, and my father had been diagnosed with early-onset Alzheimer’s. I found myself facing an uncertain future and grappling with my own faith. The spiritual hijinks of Aziraphale, Crowley, and the other colorful characters of this witty novel paled in comparison to what I was dealing with in my own life.

I used to think that books were an escape from reality; it turns out that we bring our own experiences to every story we read. Watching and rereading GOOD OMENS now, years after grappling with the hardest experience of my life, I was finally able to understand and appreciate Aziraphale and Crowley and their intense love for one another and this complicated, remarkable, and beautiful world.

Even when Aziraphale and Crowley lament the natural ability of humans to bring about their own doom, they find something in them worth loving, making GOOD OMENS one of the most optimistic and simply happy books you’ll ever read. Whether or not you believe in angels, demons, witches, Armageddon, hell hounds, or the kraken, you’ll find your faith restored by GOOD OMENS. 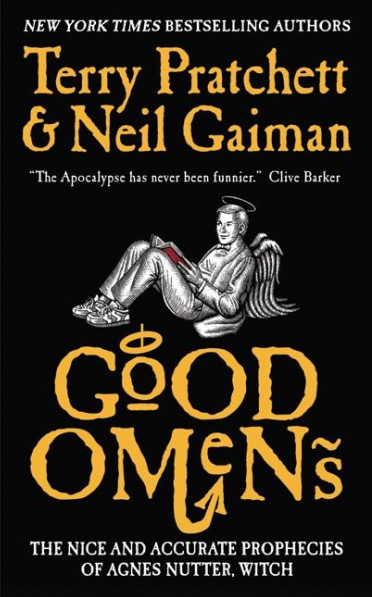 According to The Nice and Accurate Prophecies of Agnes Nutter, Witch (the world's only completely accurate book of prophecies, written in 1655, before she exploded), the world will end on a Saturday. Next Saturday, in fact. Just before dinner. So the armies of Good and Evil are amassing, Atlantis is rising, frogs are falling, tempers are flaring. Everything appears to be going according to Divine Plan. Except a somewhat fussy angel and a fast-living demon—both of whom have lived amongst Earth's mortals since The Beginning and have grown rather fond of the lifestyle—are not actually looking forward to the coming Rapture. And someone seems to have misplaced the Antichrist . . . Naughty, funny, wacky and irreverent, this is a wonderful new side of Gaiman.