You have two choices on a rainy day off: You can sulk about the uncooperative weather, or you can revel in the gloomy atmosphere by curling up with an appropriately moody mystery and a cup of tea to read while you listen to the pleasant patter of rain on the window. And since I think we all know the correct option, here are my five bookish recommendations for how to ride out April showers—or any rainy day, really. 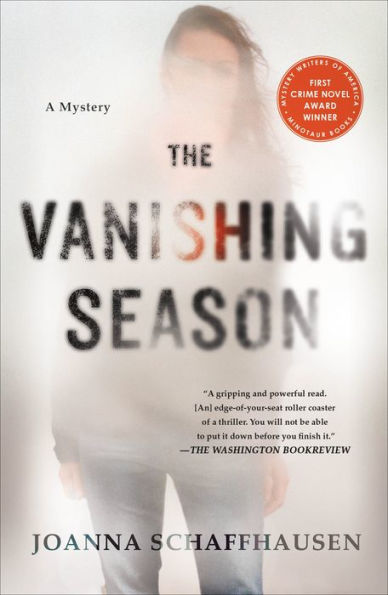 |+| Add to Your Shelf
The Vanishing Season
by Joanna Schaffhausen

Look on the bright side—when you can’t spend the day outdoors, you have an excuse to pick up a one-sitting book like THE VANISHING SEASON. Ellery Hathaway may at first seem like a run-of-the-mill small-town cop, but that’s a hard-won victory. Years before she went by the name Ellery, 14-year-old Abigail Hathaway made headlines as the lone survivor of a sadistic serial killer. Now, Ellery’s safe, anonymous life is in jeopardy, because—while her kidnapper is behind bars—three people have disappeared in three years, all around her birthday. Convinced it’s no coincidence, she calls the one person she trusts: FBI agent Reed Markham, who freed her from a monster’s closet so long ago. It’s the beginning of an unconventional partnership that continues in a sequel, NO MERCY, so, you know, just go ahead and cancel all your plans.

|+| Add to Your Shelf
The Vanishing Season
Joanna Schaffhausen 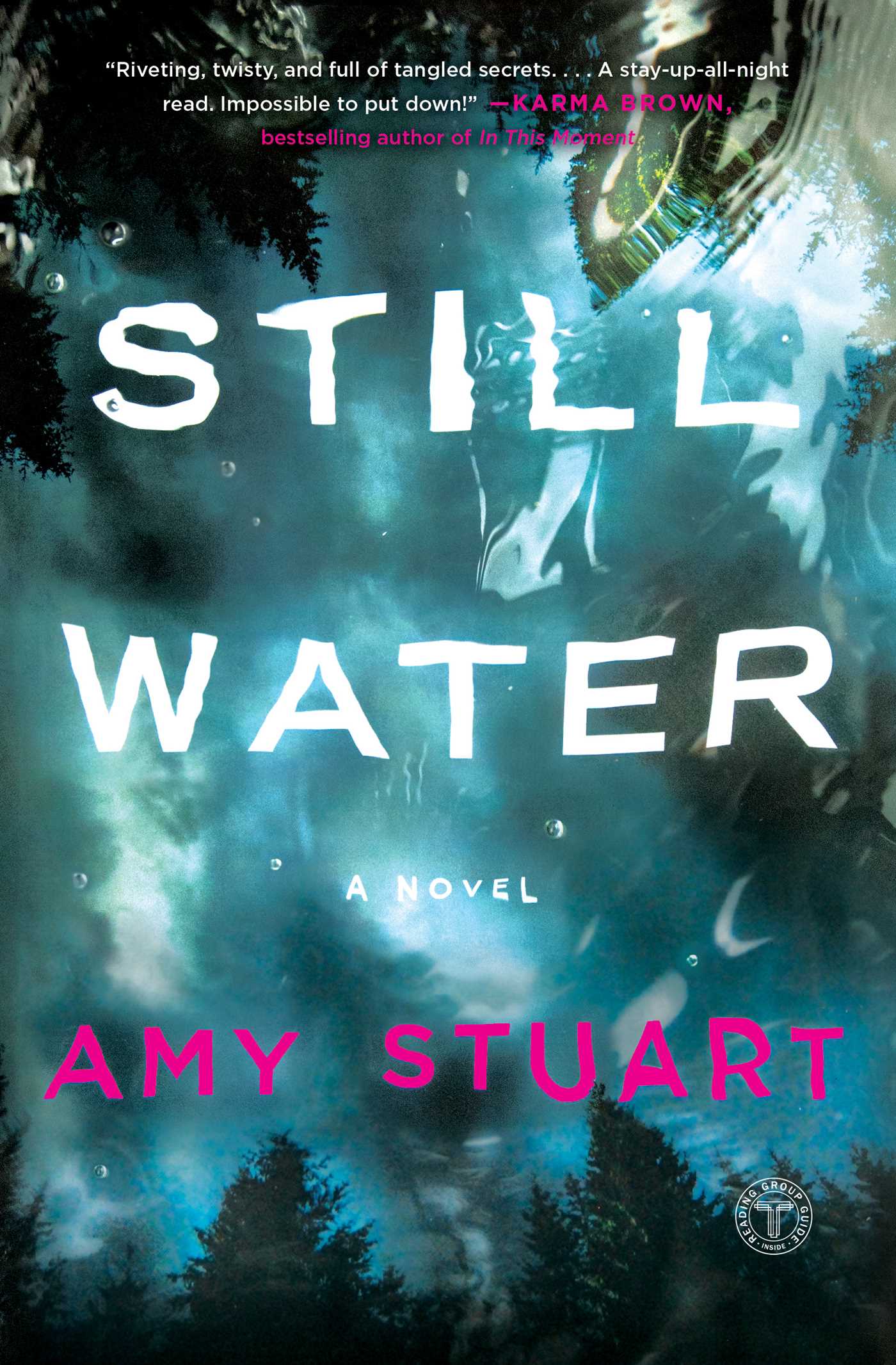 |+| Add to Your Shelf
Still Water
by Amy Stuart

Honestly, the twists and turns of STILL WATER will be enough to make you forget all about the frightful weather. When Clare O’Dey accepts a missing persons case involving a mother and her young son, she has no idea what she’s really up against. Already facing the grim possibility that the pair are dead, Clare knows time isn’t on her side. So why does it seems like the whole town—including the police, the PI who hired her, and their wealthy benefactor—is hiding some part of the truth? Although it picks up after the events of STILL MINE, Amy Stuart’s first book featuring the enigmatic Clare, STILL WATER can also be read as a standalone.

From the Globe and Mail bestselling author of Still Mine comes a new psychological thriller about the hunt for a missing mother and son in a town that is drowning in deception.

How do you find the truth in a town full of secrets?

Sally Proulx and her young boy have mysteriously disappeared in the stormy town of High River. Clare O’Dey is hired to track them down, hoping against all odds to find them alive. But High River isn’t your typical town.

In a town where secrets are crucial to survival, everyone is hiding something. And the police clearly have an ulterior motive beyond solving the case. Malcolm Boon, who hired Clare, knows more about her than he reveals. Their benefactor, Helen Haines, is concealing a tragic family history of her own. As the truth surges through High River, Clare must face the very thing she has so desperately been running from, even if it comes at a devastating cost. Compulsively gripping and twisty, Still Water is a deep dive of a thriller that will leave you breathless. 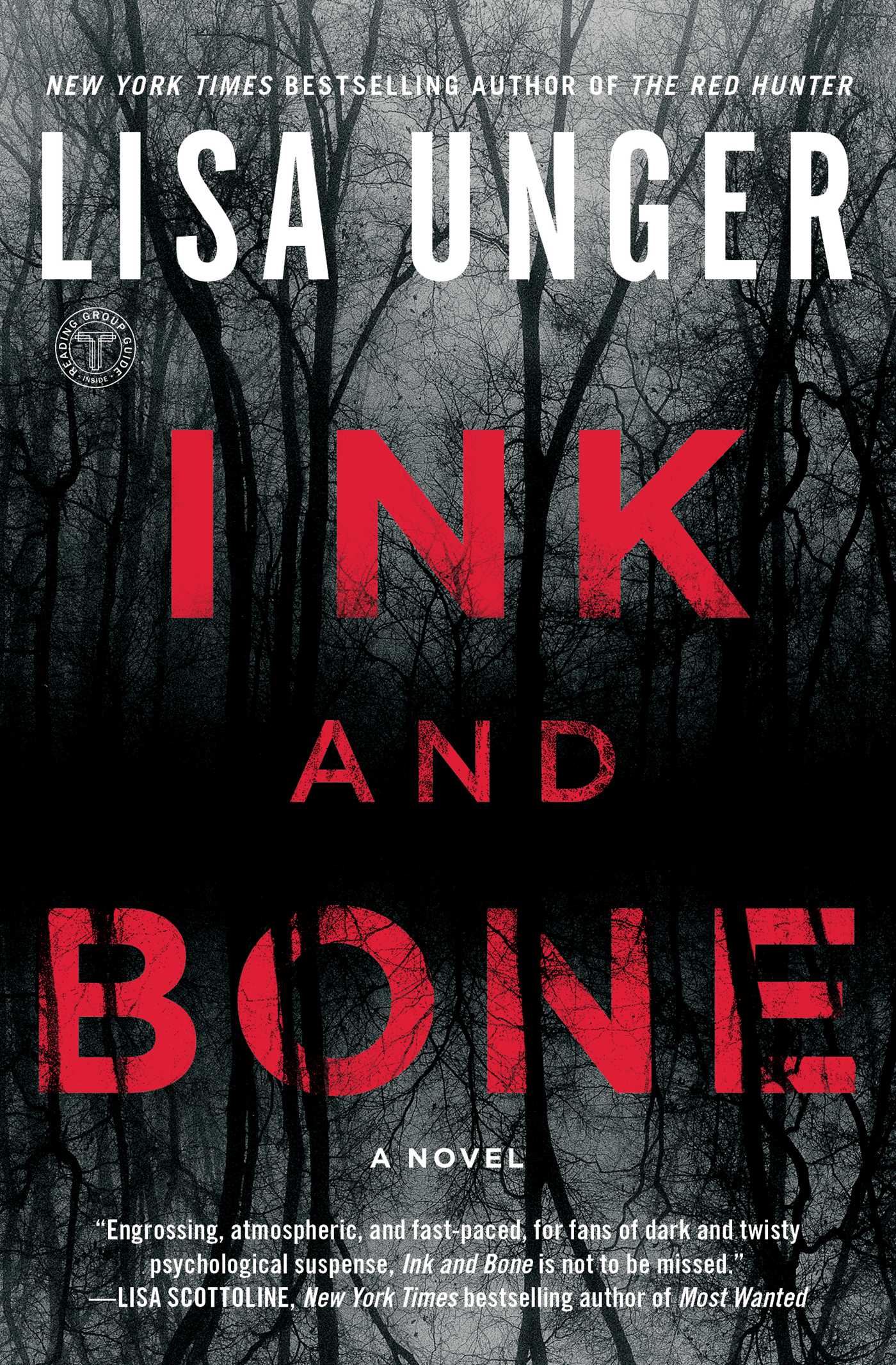 |+| Add to Your Shelf
Ink and Bone
by Lisa Unger

For a dash of paranormal added to your psychological thrills, go with INK AND BONE. You’ll immediately see why Lisa Unger’s setting, The Hollows, has been compared to Stephen King’s chilling world of Castle Rock. After a months-long fruitless search for her daughter that leaves her with nowhere else to turn, Merrie Gleason hires PI Jones Cooper, who’s been known to consult the help of a psychic, Eloise Montgomery. Little does she know, Eloise is embroiled in her own family issues—her 20-year-old granddaughter, Finley, has come to town for help understanding and learning how to control her overwhelming psychic abilities. Yet together, Eloise and Finley may be the only ones who can uncover what happened to Merrie’s daughter even as residents of The Hollows hunker down.

|+| Add to Your Shelf
Ink and Bone
Lisa Unger

“For fans of dark and twisty psychological suspense, Ink and Bone is not to be missed.” —Lisa Scottoline, New York Times bestselling author of Most Wanted

A young woman’s mysterious gift forces her into the middle of a dangerous investigation of a little girl's disappearance.

Twenty-year-old Finley Montgomery is rarely alone. Visited by people whom others can’t see and haunted by prophetic dreams she has never been able to control or understand, Finley is terrified by the things that happen to her. When Finley’s abilities start to become too strong for her to handle—and even the roar of her motorcycle or another dazzling tattoo can’t drown out the voices—she turns to the only person she knows who can help her: her grandmother Eloise Montgomery, a renowned psychic living in The Hollows, New York.

Merri Gleason is a woman at the end of her tether after a ten-month-long search for her missing daughter, Abbey. With almost every hope exhausted, she resorts to hiring Jones Cooper, a detective who sometimes works with psychic Eloise Montgomery. Merri’s not a believer, but she’s just desperate enough to go down that road, praying that she’s not too late. Time, she knows, is running out.

As a harsh white winter moves into The Hollows, Finley and Eloise are drawn into the investigation, which proves to have much more at stake than even the fate of a missing girl. As Finley digs deeper into the town and its endless layers, she is forced to examine the past, even as she tries to look into the future. Only one thing is clear: The Hollows gets what it wants, no matter what.

Books We Like to Give: 10 Reads We’re Excited to Gift This Year 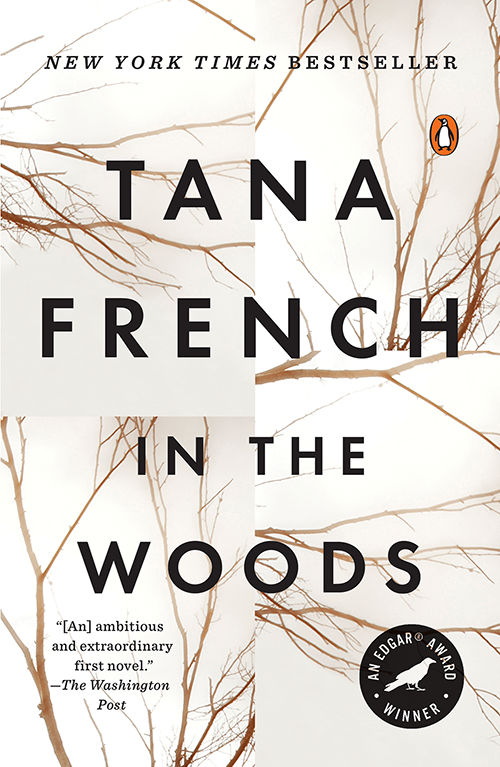 |+| Add to Your Shelf
In the Woods
by Tana French

If you’re jonesing for an atmospheric read to complement your stormy surroundings, you can’t beat a Tana French novel, including her debut, IN THE WOODS, which kicks off the Dublin Murder Squad series. Still haunted by the unsolved disappearance of friends 22 years earlier, Detective Rob Ryan finds he can’t outrun his past when he’s assigned to investigate the murder of a young girl in the same place the first crime occurred. As he and his partner and best friend, Cassie Maddox, work to solve the case and bring the murderer to justice, Rob can’t deny the personal toll it takes.

Read the full review of IN THE WOODS. 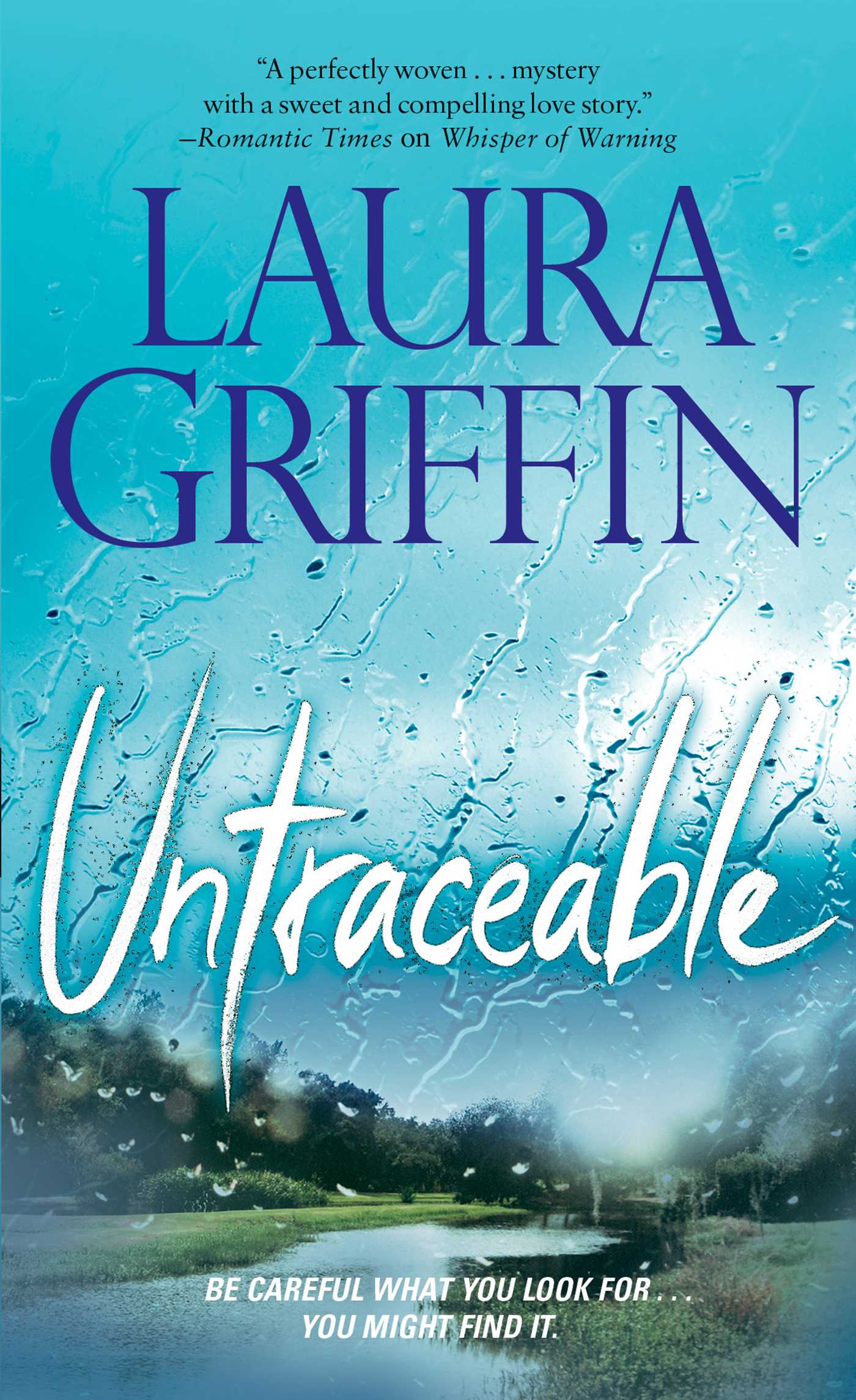 |+| Add to Your Shelf
Untraceable
by Laura Griffin

What happens when a private investigator specializing in helping people disappear realizes that one of her clients has actually gone missing? If you’re Alex Lovell, you seek out help from fellow experts, including an elite group of forensic scientists called the Tracers as well as a local Austin police detective, Nathan Devereaux. Nathan’s interest in the case is grudging at first but evolves into a fierce commitment to get to the bottom of the mystery as the evidence mounts, his feelings for Alex deepen, and together they realize that Alex’s own life may be in danger. The book that launched Laura Griffin’s Tracers series, which is currently 13 installments in and going strong, UNTRACEABLE is an ideal distraction from all the chores you should be doing on a wet, dreary afternoon.

Discover the Tracers series with this first book featuring Alex Lovell—an expert who helps her clients “disappear”—until she finds herself in the middle of a homicide investigation as the next victim. With a “fast pace, tight plotting, terrific mystery, sharp dialogue, fabulous characters” (Allison Brennan, New York Times bestselling author), this is white-knuckled thrill ride.

Private investigator Alexandra Lovell uses computer skills and cunning to help clients drop off the radar and begin new lives in safety. Melanie Bess, desperate to escape her abusive cop husband, was one of those clients. But when Melanie vanishes for real, Alex fears the worst, and sets out to discover what happened. Using every resource she can get her hands on—including an elite team of forensic scientists known as the Tracers, and a jaded, sexy Austin PD detective—Alex embarks on a mission to uncover the truth.

As far as homicide cop Nathan Deveraux is concerned, no body means no case. But as much as he wants to believe that Alex’s hunch about Melanie’s murder is wrong, his instincts—and their visceral attraction—won't let him walk away. As a grim picture of what really happened begins to emerge, Nathan realizes this investigation runs deeper than they could ever have guessed. And each step nearer the truth puts Alex in danger of being the next to disappear.