When blessed silence returns, I can listen to the butterflies that flutter inside my head.

Imagine waking up one day to find that you’ve lost all sensation in your body, head to toe. Imagine that you’re fully lucid, but your movement is limited to the slightest rotation of your neck.

Now imagine that you transcend your paralyzed body and pen a memoir via your only means of communicating with the world: painstakingly blinking out each word, letter by letter, from memory.

This is the fate that befell Jean-Dominique Bauby, then editor of French Elle, who suffered a massive stroke at the age of 44 that left him with a rare condition called locked-in syndrome — so named because the body is rendered immobile while the mind remains perfectly functional.

With heartbreaking candor, Bauby describes the stages of grief for his former life.  First, denial. Then, when’s that shattered by reality, he must come to terms with his status as an official quadriplegic, which represents a “brutal downgrading of [his] future hopes.” Meanwhile, the final stage of acceptance is infused with a deep sense of self-awareness—or, more accurately, awareness of an immutable loss of self. On Father’s Day, Bauby spends time with his children, “affirming that even a rough sketch, a shadow, a tiny fragment of a dad is still a dad.”

To escape from his biological prison, Bauby borrows a trick from the great escape artists of our time: he doesn’t struggle, but instead surrenders to his fate as a caged intellect. In this way, he is able to grasp a freedom that evades his physical self—that of his own psychic creation. “My diving bell becomes less oppressive, and my mind takes flight like a butterfly,” he writes.

Indeed, Bauby’s imagination seems to flourish as his body languishes, taking him deep into his own memories and to places not yet visited. His musings are an unexpected delight, and his wit transcends the limits of his body. Rather than dwelling on the tragedy of his altered existence, Bauby’s writing is infused with sharp humor. In one instance, with his nutritional intake reduced to several tube feedings a day, he muses, “I’ve lost sixty-six pounds in just twenty weeks. When I began a diet a week before my stroke, I never dreamed of such a dramatic result.” Later, in a statement befitting the former editor of a women’s magazine, he declares, “If I must drool, I may as well drool on cashmere.”

Bauby passed away just two days after his memoir was published, but THE DIVING BELL AND THE BUTTERFLY survives as a testament to his undying intellect, indomitable spirit, and resilience in the face of devastating circumstances.

The Diving Bell and the Butterfly
by Jean-Dominique Bauby 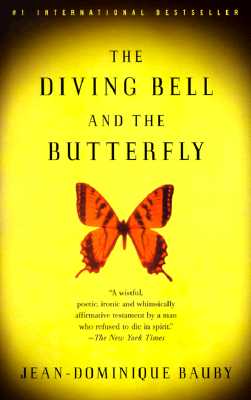 Imprisoned by His Body, a Man’s Soul Takes Flight in This Incredible Memoir