Between über-popular podcasts like My Favorite Murder and Serial and binge-worthy television documentaries like I’ll Be Gone in the Dark and Making a Murderer, chilling true crime stories have never been hotter. And yes, I am 100% aware of how disturbing that sounds. Yet it’s undeniable: We Americans, and we millennial women in particular, seem to have an insatiable appetite for real-life murder mysteries right now. Why? Maybe My Favorite Murder hosts Karen and Georgia are onto something when they speculate it’s a way of coping with the stress and anxiety of today’s uncertain world, maybe they’re not. Either way, when the news first broke in April 2018 that the infamous Golden State Killer had finally, finally been caught, I. Was. Riveted. And if you’re reading this article, I bet you were too. (Or, okay, maybe you found this list because you’ve been watching HBO’s brilliant new docuseries on the case and need to know more. Welcome!)

The Golden State Killer—also known as the East Area Rapist/Original Night Stalker (abbreviated as EAR/ONS) and as the Visalia Ransacker—terrorized Californians up and down the West Coast from the 1970s through the 1980s by breaking into couples’ homes to commit horrendous crimes. His reign of terror ended abruptly, but police and amateur detectives alike never stopped working to uncover his identity, convinced he was still alive and free. Then, a mere two months after the publication of Michelle McNamara’s highly anticipated, electrifying book about the case, I’ll Be Gone in the Dark, an arrest was made. Now, prime suspect Joseph James DeAngelo, a 72-year-old ex-cop, stands accused of at least 12 counts of first-degree murder and will face trial.

Mystery solved? Sure looks that way. But if you, like me, can’t stop refreshing your browser for any new development, allow me to recommend a few true-crime accounts to distract you…

If you’ve been following the EAR/ONS case for any length of time, you’ve likely already devoured this brilliant book, but if you’ve put off reading it, now’s the time. The late true-crime author Michelle McNamara, who died in her sleep while working on the book, coined the term “Golden State Killer” to help generate more public interest in seeing the culprit brought to justice. She also predicted what it would be like the day the notorious rapist and murderer was arrested—and turned out to be almost scarily prophetic, as you’ll see in the final pages...

Readers’ Choice: The Top 10 Most Shelved Books in September 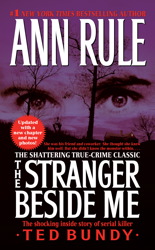 |+| Add to Your Shelf
The Stranger Beside Me
by Ann Rule

How could you not know you were friends with a serial killer? In her classic first book, the now legendary true-crime author Ann Rule grapples with that very question. Sharing pieces of her own personal life, Rule reveals how she came to know a young, handsome, ambitious Ted Bundy and why she had such a hard time accepting his guilt even as the evidence against him mounted. You may think you know the story of Ted Bundy, but the snippets of his letters from prison and the insights into his endless manipulation of women must be read to be believed.

|+| Add to Your Shelf
The Stranger Beside Me
Ann Rule

THE DEFINITIVE WORK OF AMERICAN TRUE CRIME FROM "AMERICA'S BEST TRUE-CRIME WRITER" (Kirkus Reviews) Utterly unique in its astonishing intimacy, as jarringly frightening as when it first appeared, Ann Rule's The Stranger Beside Me defies our expectation that we would surely know if a monster lived among us, worked alongside of us, appeared as one of us. With a slow chill that intensifies with each heart-pounding page, Rule describes her dawning awareness that Ted Bundy, her sensitive coworker on a crisis hotline, was one of the most prolific serial killers in America. He would confess to killing at least thirty-six young women from coast to coast, and was eventually executed for three of those cases. Drawing from their correspondence that endured until shortly before Bundy's death, and striking a seamless balance between her deeply personal perspective and her role as a crime reporter on the hunt for a savage serial killer -- the brilliant and charismatic Bundy, the man she thought she knew -- Rule changed the course of true-crime literature with this unforgettable chronicle.

|+| Add to Your Shelf
Mindhunter
by John E. Douglas and Mark Olshaker

The inspiration for the Netflix TV series by the same name, Mindhunter is the real-life story of FBI profiler John E. Douglas’s 25-year career in the Investigative Support Unit, where he hunted and studied the Atlanta child murderer, Seattle’s Green River Killer, and many, many other brutal offenders. In case you need one more reason to check this one out, I’ll leave you with this tidbit: Douglas was also the inspiration for the character of Jack Crawford in The Silence of the Lambs.

Now Streaming on Netflix: 10 Series Adaptations You Can Watch Now 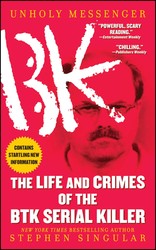 |+| Add to Your Shelf
Unholy Messenger
by Stephen Singular

For creepy parallels to the Golden State Killer case, look no further than this biography of the BTK serial killer, Dennis Rader, who escaped detection for years by living as a seemingly normal husband and father in Park City, Kansas, even as he terrorized residents in nearby Wichita from 1974 to 1991. His double life eventually crumbled, but only because he resurfaced in 2004 and couldn’t resist taunting the police with letters that ended up leading to his capture. Oops.

For creepy parallels to the Golden State Killer case, look no further than this biography of the BTK serial killer, Dennis Rader, who escaped detection for years by living as a seemingly normal husband and father in Park City, Kansas, even as he terrorized residents in nearby Wichita from 1974 to 1991. His double life eventually crumbled, but only because he resurfaced in 2004 and couldn’t resist taunting the police with letters that ended up leading to his capture. Oops.

|+| Add to Your Shelf
Devil's Knot
by Mara Leveritt

Three teenage boys, the so-called West Memphis Three, were convicted of murdering three eight-year-old boys in Arkansas in 1993 as part of a satanic ritual. Despite growing public doubt and a lack of physical evidence, their guilty verdicts were upheld on appeal. They remained in prison for 18 years. Until, in 2011, they were suddenly freed in an unprecedented manner. Trust me when I say that you’ll be hooked on this book, which is now a film starring Reese Witherspoon, and on the case, which also sparked a fascinating HBO documentary trilogy called Paradise Lost.

The West Memphis Three. Accused, convicted…and set free. Do you know their story?

In 2011, one of the greatest miscarriages of justice in American legal history was set right when Damien Echols, Jason Baldwin, and Jessie Misskelley were released after eighteen years in prison. Award-winning journalist Mara Leveritt’s The Devil’s Knot remains the most comprehensive, insightful reporting ever done on the investigation, trials, and convictions of three teenage boys who became known as the West Memphis Three.

For weeks in 1993, after the murders of three eight-year-old boys, police in West Memphis, Arkansas seemed stymied. Then suddenly, detectives charged three teenagers—alleged members of a satanic cult—with the killings. Despite the witch-hunt atmosphere of the trials, and a case which included stunning investigative blunders, a confession riddled with errors, and an absence of physical evidence linking any of the accused to the crime, the teenagers were convicted. Jurors sentenced Jason Baldwin and Jessie Misskelley to life in prison and Damien Echols, the accused ringleader, to death. The guilty verdicts were popular in their home state—even upheld on appeal—and all three remained in prison until their unprecedented release in August 2011.

With close-up views of its key participants, this award-winning account unravels the many tangled knots of this endlessly shocking case, one which will shape the American legal landscape for years to come. 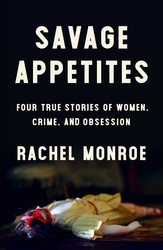 |+| Add to Your Shelf
Savage Appetites
by Rachel Monroe

Fluent in Murderino? Lulled to sleep by true crime docs? Half-convinced you could solve a case of your own? Hello, friend! You’re one of us, as is author Rachel Morris, who has channeled her own fascination with true crime into a gripping book. Part cultural analysis of what drives women’s overwhelming interest in all things macabre, part investigative report on four real-life ladies driven by that obsession, Savage Appetites will satisfy your dark and twisty mind. You may even uncover which archetypal crime figure you most identify with: Detective, Victim, Defender, or Killer. (Admit it, you’re curious.)

In this illuminating exploration of women, violence, and obsession, Rachel Monroe interrogates the appeal of true crime through four narratives of fixation. In the 1940s, a frustrated heiress began creating dollhouse crime scenes depicting murders, suicides, and accidental deaths. Known as the “Mother of Forensic Science,” she revolutionized the field of what was then called legal medicine. In the aftermath of the Manson Family murders, a young woman moved into Sharon Tate’s guesthouse and, over the next two decades, entwined herself with the Tate family. In the mid-nineties, a landscape architect in Brooklyn fell in love with a convicted murderer, the supposed ringleader of the West Memphis Three, through an intense series of letters. After they married, she devoted her life to getting him freed from death row. And in 2015, a teenager deeply involved in the online fandom for the Columbine killers planned a mass shooting of her own.

Each woman, Monroe argues, represents and identifies with a particular archetype that provides an entryway into true crime. Through these four cases, she traces the history of American crime through the growth of forensic science, the evolving role of victims, the Satanic Panic, the rise of online detectives, and the long shadow of the Columbine shooting. In a combination of personal narrative, reportage, and a sociological examination of violence and media in the twentieth and twenty-first century, Savage Appetites scrupulously explores empathy, justice, and the persistent appeal of violence.