In every reader’s life, you will come across a genre that grabs you and makes you want to go out and find every book you can on the subject. For many readers these past few years that subject has been World War II. Whether it be the stunning ALL THE LIGHT WE CANNOT SEE by Anthony Doerr, the touching THE NIGHTINGALE by Kristin Hannah, or the beautiful EVERYONE BRAVE IS FORGIVEN by Chris Cleave, we have all found a plethora of books to satisfy this itch. And satisfy it I did, perhaps too well.

I’d become quite bored with the subject of World War II and was fit to move on when my sister called me to say that I had to read Jessica Shattuck’s novel THE WOMEN IN THE CASTLE. I opened it with mild dread that I would be dragged back to the battlefields and fall in love with a character who would be betrayed by the Nazis in some way, breaking my heart all over again. However, to my delight, this book was different. This was not wartime England at all. This was Germany, with German women who were rebelling against Hitler. I thought to myself, well I’d never have believed there’d be one fresher take out there on the war but bravo Shattuck for finding one. (In fact, this book is inspired by Shattuck’s own family story.)

From the start, THE WOMEN IN THE CASTLE is a skillfully written and well-plotted novel that opens on a grand party in Germany at the beautiful house of a countess. War is only just on the tip of everyone’s tongues and the sweeping calamity of what is about to happen is still unfathomable to all in attendance. The partygoers are resistors to the Nazi cause and are certain that good will overcome evil in their beloved country.

The sounds and calls for resistance against tyranny are remarkably familiar to some more modern headlines. Let this quote sink in for a moment: “Germany was being run by a loudmouthed rabble-rouser, bent on baiting other nations to war and making life miserable for countless innocent citizens. And here they were, drinking champagne and dancing to Scott Joplin.”

Soon enough we are transported to a dilapidated post-war Germany. Solid-as-a-rock Marianne has begun to take in destitute women who were married to men of the resistance. The castle is in complete shambles, but together the women forge bonds of survival and strength. There are children to be raised and lives to carry on with after so much dread and defeat has been laid on each of their shoulders. When Russian troops descend on the castle for food and shelter, a life-altering act will set a new course for the women and they will forever be changed.

Marianne acts as the shelterer and stoic presence for the other two women. Marianne, who was given the task of looking after Benita’s son, uses all of her contacts to locate Benita after the war. When American occupation officers discover Ania from a list Marianne has given to them, the group within the castle is complete and each acts as a source of comfort or strength to all the occupants. They trudge through their remaining days with acts of bravery to survive the war.

The timeline of the novel is expansive and makes for a better story because of it. Readers will be engulfed in the life of these three women, and the book is full of lessons from history that shine a light on problems of today. There are women who are speaking out against war and a ludicrous leader, struggles with a country they love being torn apart by hate, and love sewn into each chapter.

One beautiful quote I underlined a few times was, “She pictures love as a pond to be stepped into, swum around in, and then climbed out of and toweled off before getting too chilly.” I highly recommend taking the plunge into this book. And should you choose to accept it, by the end Shattuck will grant you the greatest gift a modern novelist can hand their readers: the gift of empathy.

The Women in the Castle
by Jessica Shattuck 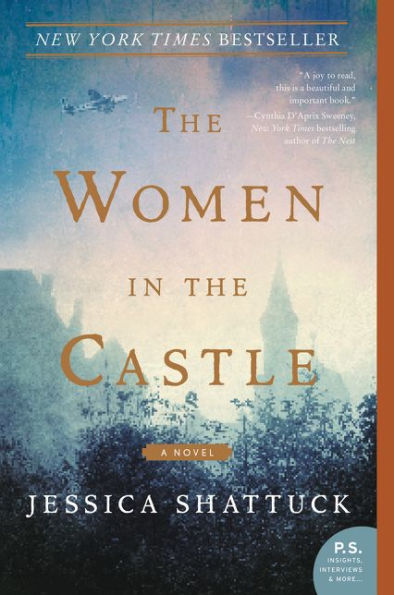 |+| Add to Your Shelf
The Women in the Castle
Jessica Shattuck

On the exhaustive subject of World War II, Jessica Shattuck has found a fresh perspective and an interesting viewpoint of the typical German citizen struggling against their homeland to do the right thing. This kind of bravery seems welcome and essential for today’s reader. —Stuart

6 Fiction Favorites Now Out in Paperback

The 5 Best Novels I Read This Spring

13 Books We Wish We Could Read Right Now

For more historical fiction, check out this list of 12 Historical Novels Inspired By Real-Life Bad-Ass Women.