I have a special subsection of my TBR pile called “Books I’m Too Scared to Read but Know Are Too Good Not To.” They’re not horror, per se, but each one of them whispers to some primal fear gripping my subconscious. Amy Gentry’s GOOD AS GONE was in that pile.

The novel opens with a knife-wielding man kidnapping a 13-year-old girl from her bedroom in the middle of the night. As a mother, this is more terrifying than all the psycho clowns and alternate zombie universes ever conjured, hence my foot-dragging. When I finally pushed through my fear and picked up this book, though, I simply couldn’t put it down.

Julie, the kidnapped girl, had been missing for eight years when she shows up on her parents’ doorstep with a story of being abducted and trafficked into Mexico. Her parents, Tom and Anna, are so overcome with joy that the worst has “unhappened” that they never stop to ask the question that drives the entire narrative at pulse-pounding speed: Is this damaged woman really Julie?

What impressed me most about Gentry’s book, beyond the plot and superb characterizations, is the handling of time. The narrative alternates between two points of view that diverge in time from the moment of Julie’s homecoming. Anna, speaking in first person, begins to doubt the identity of the woman living in her house. She finds inconsistencies in Julie’s tale, secrets and lies that seem incongruous with the daughter she lost. Julie’s story, on the other hand, moves backward from her homecoming, unearthing the layers of a life built on trauma, desperation, and disguise. Gentry smartly uses the third person point of view for Julie’s sections, erecting a subtle, clinical distance between us and this mysterious woman.

One of the marks of Gentry’s talent is that, despite Julie’s many deceptions, I never felt deceived or tricked as a reader. The narrators always felt reliable—it was time itself that became the unreliable element, the concealer of identities.

Gentry sets up this instability in the very first line of the opening chapter. “Julie’s been gone for eight years, but she’s been dead much longer—centuries.” Here we are shown the fictional enactment of Einstein’s dilation of time, the principle that time moves slower near greater gravitational forces, and in GOOD AS GONE Julie’s disappearance is the black hole in the world.

As Julie’s story collapses back to when this black hole began, when a 13-year-old girl was walked at knifepoint out of her comfortable suburban life, the lines between first and third person begin to quiver and disintegrate, and the ideas of self and other becomes as mutable as time.

This is an absolute must read for anyone who loves thrillers and mysteries, and also has a day to lose in the black hole of not being able to put this book down.

Good as Gone
by Amy Gentry 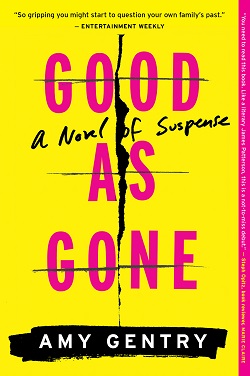 |+| Add to Your Shelf
Good as Gone
Amy Gentry

Years after 13-year-old Julie was kidnapped from her bedroom, she turns up on the doorstep of her family’s home. But is this young woman the real Julie? Propulsive and suspenseful, GOOD AS GONE will keep readers guessing until the final pages.

The Book I Was Scared to Read, But Knew Was Too Good to Pass Up

13 Page-Turning Murder Mysteries Recommended by Off the Shelf Readers

You may also like Mindy Mejia’s novel EVERYTHING YOU WANT ME TO BE.