There is this silly word that only exists in book reviews and was probably invented by a book reviewer. It’s “unputdownable.” Spell check will always underline it in red, auto-correct will always suggest confusing replacements, and I’ll always picture a book with some sticky, glue-like substance on it preventing you from releasing it.

The word might be silly, but the concept isn’t.

I happen to judge books by their “stickiness,” or how long the story, resolution, or characters stick with me after I finish the last page. The stickiest book that I’ve read in a long while was Mindy Mejia’s EVERYTHING YOU WANT ME TO BE.

Meet high schooler Hattie Hoffman. Hattie has spent her entire life being good: a good daughter, a good student, a good girl. Or has she? But this too-smart-for-her-own-good young woman may not know how much power she has or how manipulative she is. Then, she is stabbed to death on opening night of her school play.

We see her family in peril because their daughter is murdered, and another marriage in peril because they had to move back to the wife’s hometown to take care of her ailing mother. The story is told from three different points of view and alternates between pre-murder, leading up to the crime, and post murder, investigating the crime.

Now, back to the stickiness. I read this book in March 2016, but as I wrote the preceding paragraphs, the emotions I felt while reading it and passion I had for the characters and the situations that they found themselves in flowed through me like I had just finished the book.

For the all-too-brief time it took to read EVERYTHING YOU WANT ME TO BE, I lived in that town, I knew those characters, and I felt their feelings. I investigated along with the authorities, felt the stress of the unknown and the shock of every twist and turn. And I still feel it today. It stuck.

It takes a special writer to create stickiness. Mindy Mejia is one of them. You may be able to release EVERYTHING YOU WANT ME TO BE from your grip, but it won’t let you go.

Everything You Want Me to Be
by Mindy Mejia 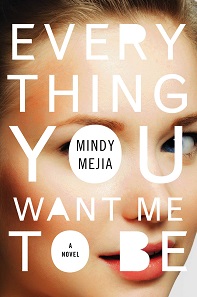 Full of twists and turns, EVERYTHING YOU WANT ME TO BE reconstructs a year in the life of a dangerously mesmerizing young woman, during which a small town’s darkest secrets come to the forefront . . . and she inches closer and closer to her death.

Read our review of EVERYTHING YOU WANT ME TO BE here.