My copy of Curtis Sittenfeld’s PREP is “well loved,” to put it lightly. The spine is broken and held together precariously with Scotch tape, the pages are falling out, and the cover is hanging by a corner.

It’s strange to think there was a time when I didn’t have it practically memorized, but the first time I read it was when I was 14 and I indefinitely borrowed it from my best friend. I had to hide it under the jacket of another book because my mother did not consider it “age-appropriate” reading material.

PREP is the story of Indiana-native Lee Fiora and her years at Ault, a prestigious New England prep school. But PREP isn’t your typical salacious prep school book—it’s keenly astute and poignant. Sittenfeld brilliantly utilizes the setting of a boarding school as the perfect microcosm to explore issues of race, religion, class, geography, and sex.

If I had to cite a single reason why I keep returning to the pages of PREP—or how my copy got to this tattered, ragged state—it would be that somehow reading about all-consuming loneliness makes me feel not so alone, a contradiction that’s perhaps familiar to all book lovers.

At home in the Midwest, Lee was thought of as a veritable prodigy and is able to attend Ault by means of a significant academic scholarship. She quickly finds herself out of her league in a school completely devoid of mediocracy. Her inability to fully assimilate into the world of Ault allows her to remain hyper-observational to its strange culture and people.

One of my favorite parts of the book is when Lee attends a school talent show and watches a boy she doesn’t know perform “Fire and Rain.” In his brief time onstage, Lee feels a connection to him—who could play “Fire and Rain” without understanding loneliness? She allows her mind to race ahead and invent an imaginary future with him where they seek solace in each other, spend Christmas break with his family (he looked like he would be from Maine), share clandestine kisses in the chapel at night.  But as he finishes the song and takes a bow, he is met with the loud applause of a slew of girls—clearly not a fellow loner after all. When one stands out as his girlfriend and Lee’s fantasy is shattered, she realizes,“Tullis was no one I could have loved or been loved back by.”

Lee learns that the indicators of success, prestige, and the “good life” aren’t always as obvious as a name carved into one of the plaques that hang in the Ault dining hall. It’s about the flowered bedspreads, or the fact that her classmates buy expensive clothing on trips away from campus only to conceal their illegally purchased alcohol. In an interview with a New York Times reporter near the end of the novel, Lee suddenly realizes the root of her desire to attend a school like Ault, and what it signified for her. Remembering a childhood family vacation driving through a glamorous neighborhood and asking her father if they could move into a beautiful house like the ones they were admiring, she recalls him laughing and saying that these are the kind of houses where the owners can afford to send their sons to boarding school. “Do they send their daughters… ?” she remembers herself asking.

Lee is not usually regarded as a “likable” character, but how relevant is the likable character argument, really? She reflects how hard it is to be likable when sometimes simply just existing is difficult enough—when all of your energy is consumed just by getting through your days. Lee is real and true and says things that we’re all thinking, and as a result, PREP is one book that reads exactly as life really feels. 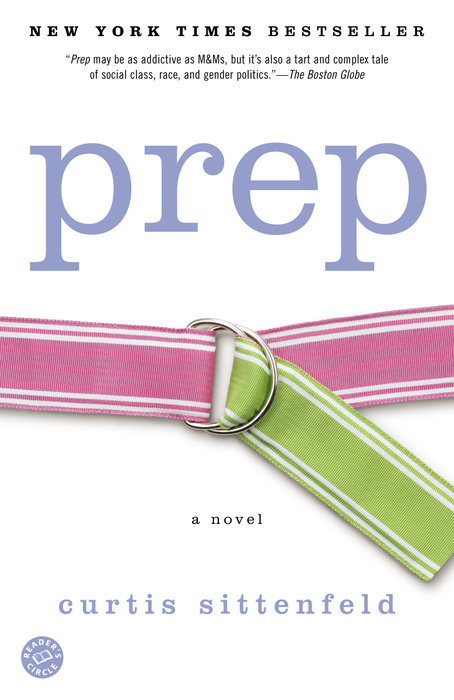 Although she once felt like an outsider, scholarship student Lee managed to carve a place for herself at the Ault School. When her behavior takes a self-destructive turn, though, her carefully crafted identity is shattered. Curtis Sittenfeld’s debut novel is an insightful and uproarious coming-of-age story, as well as a vivid dissection of class, race, and gender.