In the literati community, this is a sacrilegious confession—but here it goes: I was just never that into Harry Potter. I began to lose interest midway through the series, finishing it only because of my driving (borderline OCD) need to always finish what I started.

But despite the premature extinguishment of my wizardry-related passion, there was one Potter concept that took hold of me: the mystical Marauder’s Map, which pinpointed everyone at Hogwarts in time and space for its lucky holder. How convenient would it be to trace the unknown in this way, to know exactly whose path you’d crossed in a given day, week, or year—to know where your closest friends and worst enemies spent their most intimate hours?

Of course, the unknowable is often better left that way, and embracing that uncertainty is the end to which Rebecca Solnit urges her readers in A FIELD GUIDE TO GETTING LOST. Solnit takes readers on a winding journey through time and space, through multiple parallel and intersecting histories—of native American guides and early explorers, of the westward push of the Gold Rush, of her own childhood, and of friends loved and lost. This zigzagging journey is framed by a single question: “How will you go about finding that thing the nature of which is totally unknown to you?”

The book itself is meandering, as one that weaves together so many disparate threads is wont to be. This, too, is by design. Solnit declares her driving conviction as such: “Never to get lost is not to live, not to know how to get lost brings you to destruction, and somewhere in the terra incognita in between lies a life of discovery.”

She invites her readers to find that sweet spot where discovery can emerge from happenstance and the “violence of metamorphosis” can take hold; pushing themselves blindly to the edge of knowledge and comfort, and over the steep cliff that ends in the final sweetness of unfamiliarity. Indeed, Solnit believes that to be grounded, you must first be unmoored. “Emptiness is the track on which the centered person moves,” she unwaveringly asserts.

In reading this book, I found myself lost in familiar places, captivated by Solnit’s retelling of stories from the far reaches of history and memory. My “voluptuous surrender” to the forces that be began on a park bench; perhaps it will lead me, finally, to a landscape yet unknown.

A Field Guide to Getting Lost
by Rebecca Solnit 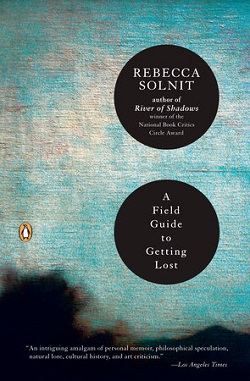 “Never to get lost is not to live,” instructs Rebecca Solnit in A FIELD GUIDE TO GETTING LOST. Putting aside the truism of journey-as-destination, this ode to wanderlust is filled with essays on navigating modern life when your point of navigation is a moving target. In gorgeous prose and through unexpected paths, Solnit illustrates how sometimes the best way to find what you need is to get lost.