There are certain characters that are so ubiquitous that it’s hard to imagine our lives without them. Princess Leia is one such character for me.

To avoid this review becoming a diatribe of Leia’s significance in my life, I will simply say that there has been no character that has inspired, strengthened, and just plain wowed me as Princess Leia has.

But as Carrie Fisher explained in her last memoir, THE PRINCESS DIARIST, she had a complicated and fraught relationship with Leia, Star Wars, and their legacies. And after reading it, I understand.

Well, I should admit that when I first read THE PRINCESS DIARIST, I skipped a few chapters ahead to her revelation that she had an affair with Harrison Ford—but that’s only because I was reading aloud to my mom as we drove to a relative’s house for Thanksgiving. She’s not much of a Star Wars fan, but she once nursed a crush on Harrison Ford, so can you blame me?

My reading was often interrupted by our laughter and remarks about the similarities between all 19-year-old girls, which Fisher was when she first donned the iconic cinnamon-bun hairstyle. I think most of us can remember the vulnerability, ego, insecurity, and deep desire to be loved and thought of as cool that we experienced as teenagers. The fact that Princess Leia felt the exact same way while saving the galaxy was moving to read.

THE PRINCESS DIARIST is ultimately about self-acceptance. It’s about being able to laugh at the sorrows and indiscretions of youth. It’s about not being ashamed of your past and being strong enough to construct your own identity.

It’s not an easy process and it can take many years but once you do, you can be comfortable in your own skin. When that happens, it’s a lot easier to put others at ease, too. And Carrie Fisher did just that when I met her at her book signing event for THE PRINCESS DIARIST.

Our encounter lasted less than a minute but she immediately made me feel like I was catching up with a beloved and fun aunt—even when I explained how important she and her work has been to me. She was able to make me laugh rather than nervously burst into tears (I did that later).

I had no idea that about a month after I finished THE PRINCESS DIARIST, I’d be crying at the news that my personal embodiment of female power, agency, and hope was gone. Yet I try to remember that, as she admitted in this last book, Carrie Fisher has achieved immortality.

Few people can claim that, and even fewer have lives that become a continued source of global inspiration and celebration. Yes, we are all devastated that she is no longer with us in person. But, as evidenced by the popularity of her numerous books, and her celebration at conventions, at rallies, and as a costume on new generations of young girls, it’s clear that Carrie Fisher and Princess Leia aren’t going anywhere.

The Princess Diarist
by Carrie Fisher 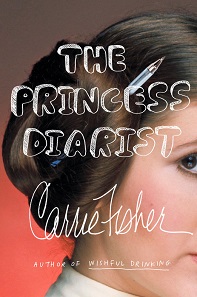 |+| Add to Your Shelf
The Princess Diarist
Carrie Fisher

Her third memoir, THE PRINCESS DIARIST, published shortly before she died, serves as one of the final pieces of Carrie’s legacy. Carrie consulted the journals she kept during the filming of “Star Wars” to tell the behind-the-scenes story of the beloved franchise from the point of view of a woman looking back at her naïve and vulnerable teenage self.

The 5 Best Books My Family Shared on Long Car Trips