THE BEAN TREES begins with a tire exploding and a woman leaving home in a battered car and changing her name. From this description, it may sound as if I’m speaking of a high-octane thriller, but THE BEAN TREES is a beautiful literary novel, Barbara Kingsolver’s first (before she was famous for THE POISONWOOD BIBLE). Missy-turned-Taylor Greer is neither running from a killer nor from the law. She’s a part Cherokee, twentysomething, down-home Kentucky girl who never could quite sit still.

Taylor decides to leave her hometown  after witnessing a boy she grew up with die from a self-inflicted gunshot wound. She saves up to buy an old Volkswagen that has fewer windows than doors, no real backseat, and will only start if she pushes off with her foot.

To say the least, from page one, Taylor Greer is quite a character. And from page one, it’s impossible not to love the girl who describes herself as a “plain hillbilly from East Jesus Nowhere” and declares that barefoot and pregnant just ain’t her style.

Taylor has no real plan when she leaves her mama in Kentucky and sets out to drive west. She decides she’ll simply settle wherever her car gives out. While stopped at a diner on the Cherokee nation, though, her plans are abruptly changed. A woman sets a filthy toddler on Taylor’s front seat and begs her to take the child. At first, Taylor is unsure what to do, but when she discovers that the little girl has suffered horrific abuse, she determines she can’t leave her behind. After noticing her strong grip, Taylor names the girl Turtle, and decides to take her along on her journey.

When Taylor and Turtle eventually roll into Tucson, Arizona—the old car on its last leg—they find themselves in a garage run by a woman named Mattie. In the following months, Taylor’s worldview is significantly expanded, as she grows into motherhood, discovers more of Turtle’s history, and learns that Mattie runs a sanctuary for illegal immigrants above her garage.

Before arriving in Tucson, Taylor had spent most her life with only one clear goal: to get out of her hometown. Now that she has a new daughter and friends at the garage, Taylor finds a place in the world that she never had before, and she finds a greater purpose for her life through helping those around her.

Barbara Kingsolver has an amazing skill when it comes to creating unique, lovable-yet-flawed characters. They have stuck in my head like old friends for over five years, and from time to time, I feel a need to return to this book, for its beautiful prose, fascinating characters, and powerful statements about humanity. THE BEAN TREES will continue to stay with me, having become both a book that changed my life and a book that holds one of the top spots on my extensive list of favorite novels.

The Bean Trees
by Barbara Kingsolver 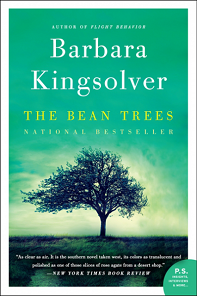 |+| Add to Your Shelf
The Bean Trees
Barbara Kingsolver

I’d like to have dinner with Estevan from Barbara Kingsolver’s THE BEAN TREES. I would probably be intimidated by his vast knowledge and life experiences, as he was once an English teacher in Guatemala before fleeing his home country as a refugee, but considering I thought hearing about his experiences in the book was both fascinating and heartbreaking, having dinner with him and getting to hear more would also be wonderful.