Paul Kalanithi recounts the story of his own mortality with the precision of a surgeon and the poeticism of a gifted writer—because, of course, he was both.

But his uncanny ability to inhabit two seemingly disparate worlds does not end here; his narrative also straddles the divide between doctor and patient, caretaker and cared for, lackadaisical philosopher and man of reason. At the heart of this reckoning is the battle that consumes his days: “to pursue death: to grasp it, uncloak it, and see it eye-to-eye, unblinking.” WHEN BREATH BECOMES AIR is the beautiful, heartbreaking exploration of this very inevitability that we all fear—but that few dare to look straight in the eye.

On the cusp of completing many grueling years of training to become a neurosurgeon, 36-year-old Kalanithi is suddenly stricken with unbearable back pain and extreme weight loss. Fighting through the pain for many months, he finally confronts the demon growing within his traitorous cells: lung cancer.

Facing the unceremonious evaporation of his career in neurosurgery, he decides to pursue his second life ambition—to write a memoir. Within these pages, the reader is given the unique gift of Kalanithi’s unflinching prose as he passes “from the subject to the direct object of every sentence of [his] life.” We’re with him when he collapses in pain, his body wracked by back spasms, on an airport bench; when he faces the possibility that he may not live to see his 25-year college reunion; and when he and his wife, Lucy, decide to have a child despite his imminent demise, both feeling “that life wasn’t about avoiding suffering.” We’re even there with him—thanks to a ruefully stunning epilogue from his wife—when he takes his last breath, his 8-month-old daughter resting on his chest.

Bookended by an incisive foreword from Abraham Verghese—a physician himself and the author of CUTTING FOR STONE—and a final epilogue from Lucy, the memoir itself is a meditation on life and death that packs existential meaning and emotional resonance within its compact 200 pages.

Indeed, the book is cut short, the last pages a blur, mirroring the tragic shortness of Kalanithi’s own life. But even this, this unintended quickening to the end, is not without meaning; as Lucy writes in the epilogue: “WHEN BREATH BECOMES AIR is, in a sense, unfinished, derailed by Paul’s rapid decline, but that is an essential component of its truth, of the reality Paul faced.” Even posthumously, Kalanithi has managed to deliver a searing meditation on the meaning of life—and of death. 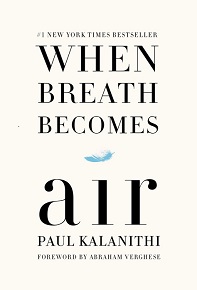 |+| Add to Your Shelf
When Breath Becomes Air
Paul Kalanithi

A profoundly moving and exquisitely written memoir by a 36-year-old neurosurgeon dying of lung cancer, WHEN BREATH BECOMES AIR chronicles Paul Kalanithi’s transformation from naive medical student to renowned neurosurgeon to patient. It’s impossible not to tear up as Kalanithi honestly and directly questions what makes life worth living as a doctor, as a dad, and as a person.

Read the review of WHEN BREATH BECOMES AIR.

A Doctor’s Final Reckoning With Death