New York City is rich with fascinating stories. Some are heartbreaking, some funny, and some so mysterious and odd, you would assume they are fictional.

One such story is the tragic tale of Mary Rogers—a young woman whose body was found floating in the Hudson River in 1841. Her story seems to be straight out of a Gothic mystery…perhaps because it inspired one.

I found Daniel Stashower’s THE BEAUTIFUL CIGAR GIRL: MARY ROGERS, EDGAR ALLAN POE, AND THE INVENTION OF MURDER in the true-crime section of a local bookstore. But this is so much more than the story of a crime—it’s a slice of life in a time and place that is both eerily familiar and completely foreign.

The New York of the 1800s was still searching for its identity, struggling to maintain a semblance of order with no official, organized police force. It was overwhelmed with a constant influx of people desperate to survive as a major recession shook the young nation.

Mary Rogers—the beautiful, waiflike woman who worked at a Broadway cigar shop—became well known throughout the city and was, quite frankly, famous for being famous. It’s no wonder that when she disappeared in July of 1841, many searched for her to no avail. Her body was discovered three days later and it was clear from the markings on her that she had met a violent end.

We still do not know what exactly befell the Beautiful Cigar Girl—as she was called in the sensationalized newspaper stories that followed the case with frenzied excitement—we only know that her murder changed New York politics and public safety standards.

This crime also inspired Edgar Allan Poe to craft one of the first murder mysteries based on a true event, a story he hoped would be his masterpiece. Poe labored over “The Mystery of Marie Rogêt” and, quite literally, banked his entire future career on its success. But, as Stashower illustrates, this talented man frequently brought about his own catastrophes. Yet we can’t help but root for him as he puts every effort into solving the Mary Rogers case by crafting a similar fictional crime.

While reading, you find yourself trying to solve the mystery as well, and each revelation of the months-long investigation is a stunning twist to a complex crime. Quite frankly, it’s easy to forget that the murder of Mary Rogers was a real event or that Poe struggled so agonizingly to achieve success.

In fact, it’s easy to forget that New York City did not always look like it does today. It has evolved, gone through difficult growing pains, borne witness to many tragedies, found redemption, and been the colossal inspiration behind some of the greatest works of American literature. 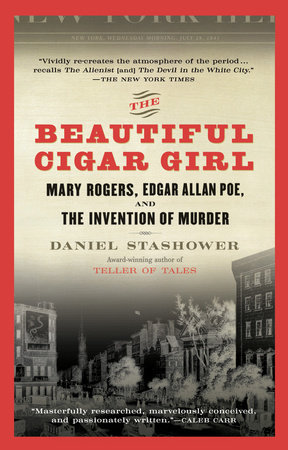 |+| Add to Your Shelf
The Beautiful Cigar Girl
Daniel Stashower