I collect ghost stories. I don’t believe in ghosts—but I’ll read any and all types of haunting stories. One of my favorites, REBECCA by Daphne Du Maurier, is a Gothic novel that doesn’t technically have a ghost but features many fundamentals of a classic ghost story. There’s a huge, labyrinthine old mansion, a spooky woman in black, a mysterious death, an eerie painting, and a dead woman whose haunting presence is felt in every corner of her former home, Manderley.

The titular character, dead a year before the novel’s narrative begins, never appears, but is the instigator of all the action. Without her, her ex-husband, Maxim de Winter, wouldn’t have disappeared to Monte Carlo and stumbled across our unnamed narrator, a nervous, waiflike young woman who is distinctly below Maxim in class and background. Yet, something about her appeals to him, and he quickly marries her and brings her to Manderley as the new Mrs. de Winter. This does not sit well with some of the staff, especially the dark and dreary Mrs. Danvers, whose idolization of the late Rebecca skirts toward the sexual.

In a brilliant stylistic choice, Du Maurier never names the narrator and her very identity seems to crumble under the weight of her new title as the mistress of Manderley. In fact, she appears to be more of a ghost than Rebecca, who died mysteriously in a boat wreck. Her new husband’s aloofness, her gauche insecurity, and her belief that she will never measure up to Rebecca’s grace and charm are depicted so genuinely, you cannot help but commiserate with her at every faux pas she commits. But this novel is so much more than simply a social commentary or domestic tragedy.

Like so many before and after her, Du Maurier was enchanted by the mysterious romance of the tragic Brontë siblings. The influence of the eighteenth- and nineteenth-century Gothic writing of isolated women and Byronic, secretive men is starkly apparent in REBECCA. Just like Charlotte Brontë’s JANE EYRE, REBECCA is a dark and richly romantic tale of second wives, detached husbands, and unnerving British estates that house secrets and violence.

There are many twists and turns in this novel that I dare not reveal here, though if you are familiar with classic Hollywood, you may have seen the sumptuous film version by Alfred Hitchcock—which I highly recommend. This suspenseful adaptation puts you on edge—as if it were a straightforward haunted house movie and, as in the book, you can almost swear you see the specter of Rebecca out of the corner of your eye.

An evocative novel, filled with some of the most gorgeously wrought Gothic writing of the last century, REBECCA was unjustly overlooked by critics when it was first published. Yet it has been continuously in print since its 1938 release and has inspired films, plays, novels, and even an opera. There is just something about Du Maurier’s masterpiece that grabs hold of you and, like a ghost, never quite lets go. 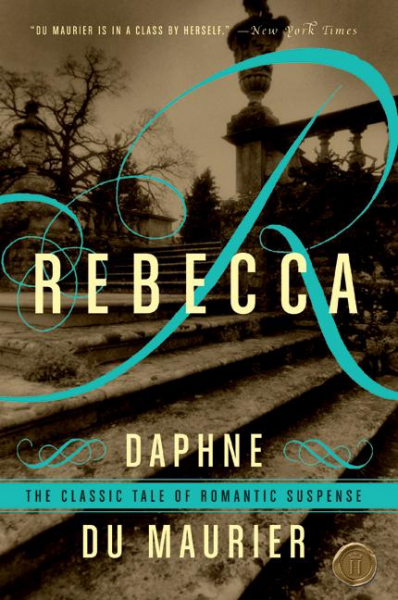