As a fourteen-year-old with plans of becoming a journalist or a publishing professional and a love for Anne Hathaway, it’s not surprising that I watched “The Devil Wears Prada” many, many times. Then, as is my habit, once I discovered it was based on a novel, I bought what is now an incredibly beat-up movie tie-in edition with Anne Hathaway and Meryl Streep’s faces on the back cover.

THE DEVIL WEARS PRADA by Lauren Weisberger is still the book I turn to when I need an amusing, lighthearted read with quirky, entertaining characters and a side of dish.

For those who have seen “The Devil Wears Prada” movie, I strongly suggest going out and purchasing a copy of the book. While I like both, they are definitely different experiences, with the characters having different motivations and relationships. In both, aspiring journalist Andrea Sachs manages to land the job “a million girls would die for” at Runway, one of the country’s top fashion magazines right out of college. Andrea’s interest in fashion is minimal, but she takes the job with the promise that after a year of working for the magazine’s ridiculously demanding editor in chief, Miranda Priestly, she’ll be able to get a job at any magazine she wants.

Andrea’s experience in the world of Runway and the fashion industry is outrageous and filled with drama. Take for example, the hilarious “Runway Paranoid Turnaround,” where fellow employees quickly backtrack when they say anything negative about Miranda—a habit Andrea picks up very fast.

In the book, many characters that take a side role in the movie are explored in much more depth. Even characters with smaller roles are fleshed out, such as the security guard in the Runway lobby who makes Andrea act out songs before he’ll let her past each morning, and the homeless woman she brings sweet drinks to during her Starbucks runs.

As for the more important people in Andrea’s life—including her parents, her boyfriend, and her best friend, Lily—their side plots, such as Lily’s alcoholism and Andrea’s boyfriend’s struggles as a new teacher, give a strong indication of just how much Andrea’s job is pulling her away from everything that matters. 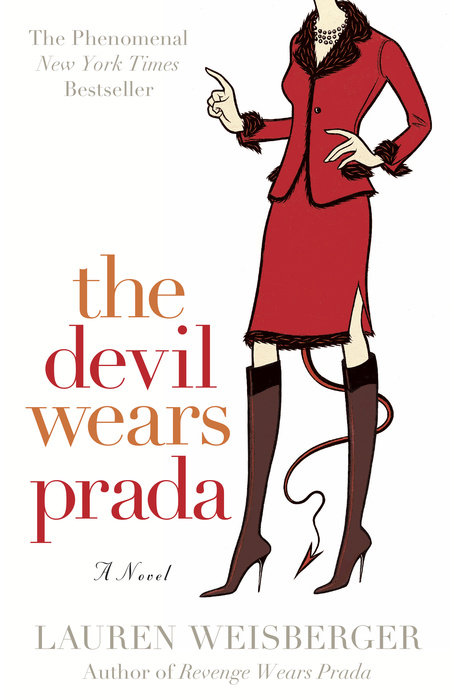 |+| Add to Your Shelf
The Devil Wears Prada
Lauren Weisberger

Lauren Weisberger’s bestselling novel was a higher-profile literary work than Bushnell’s Sex and the City, and the movie version a closer adaptation. But what an adaptation it is: the book set the bar high, it was smart and fun, but the movie was a romp that brought romantic comedy to new heights. Anne Hathaway, Emily Blunt, and Stanley Tucci all created unforgettable characters, but Meryl Streep’s performance as the Prada-wearing devil herself, Miranda Priestly, is one for the ages.

10 Fashion Icons from Novels We Love

“Sex and the City” Is 20 Years Old! These 8 Books Will Make It Seem Like Yesterday

Water Cooler Book Club: 14 Books About Life in a Cubicle

A Dishy and Witty Novel Perfect for Your Prada Bag