It’s a rare gift to be able to accessibly present real science to the public. It’s even rarer to find someone who does so with the enthusiasm and humor that Mary Roach brings to the table. We all know that humans have evolved to survive the environment on Earth. In PACKING FOR MARS, Mary Roach asks: What happens when we go into space—a place without air, food, water, or anything else we need? This thought fascinated Roach so much that she spent two years finding out, traveling and interviewing and researching all possible aspects of it.

This isn’t the glory you see on television. Far more interesting than the glamour shots of the moon landing are the mundanities that make it all possible. To illustrate her point, she begins with the flag-planting ceremony from the moon landing. Months of preparation went into ensuring that a flag would go with the Apollo astronauts; since there is no wind on the moon, the flag itself was reinforced with metal rods, and a special container designed to survive the intense heat of leaving orbit was created. The actual moment was practiced on Earth numerous times to make sure it would work. The end result was effective enough that it spawned a generation of conspiracy theories about the moon landing, metal rods notwithstanding.

And that isn’t the weirdest thing we learn, not by a long shot.

A whole cottage industry in science has sprung up to simulate conditions in space, from people who spend months in bed to mimic zero gravity to subjects who willingly undergo months of isolation so we can find out in advance whether a multi-month trip to Mars will send future astronauts spiraling into madness.

Roach leaves no stone unturned in her quest, no matter how bizarre it is. There is a chapter about food for astronauts and an explanation as to why everything NASA sends into space is so incredibly expensive. What happens if you vomit in your space helmet? How do you visit the bathroom when you can’t actually sit down? You may never have wondered the answers to those questions, but rest assured, Mary Roach will make sure you find out.

Just as fascinating as the current science is the history of how we adjusted to space. While it is easy to mock early ideas, we had no idea, really, how the human body would fare outside the safety of our atmosphere. Some wondered if the human mind would snap, or whether internal organs would fail in zero gravity. Such fears turned out to be mercifully misplaced, but a lot of questions still remain about the effects of long-term journeys in space. We’ve learned a lot about how we deal with space in the short term. If we’re ever to go to Mars, or beyond, however, there is still quite a lot to learn.

Opening this book was like opening a cabinet of curiosities. The sheer breadth of the topic, and the research involved, is staggering. Yet PACKING FOR MARS was fascinating enough that I read it in just a few days. I immediately found myself looking for another of Roach’s books, and they are similarly esoteric—STIFF about death, BONK about sex, GRUNT about war. Even people who generally aren’t interested in science will be hard-pressed to find PACKING FOR MARS dull, and the author’s sense of humor ensured that I had to read this book at home, my laughter echoing off the walls.

Packing for Mars
by Mary Roach 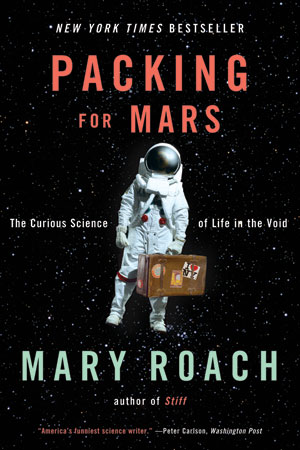 |+| Add to Your Shelf
Packing for Mars
Mary Roach

Take an entertaining trip into the science of life in space. The brilliant and hilarious science writer Mary Roach paints an intricate portrait of how things actually work when human beings go into space, from the mundane—attending to basic human needs such as air and water—to the luxuries of beer and privacy.

15 Books for Literally Every Reader in Your Life

What Really Happens When We Go Into Space