I love reading dystopias. I love the worlds that authors create out of one aspect of our society, and I love that, by the end, I am so relieved to look up and be grateful that I live in a first-world country. But Dave Eggers is not interested in disconnecting you from the world with THE CIRCLE. And let me tell you, without any kind of gore, violence, or weapons, this is one of the scariest things I’ve ever read.

Mae Holland, millennial extraordinaire (and someone who can’t really hold a job), lands at a prestigious Facebook/Google/Twitter mash-up of a company called the Circle, which has succeeded at streamlining social media into one easy site. And at first, everything seems wonderful. All the rumors you’ve heard about job perks are present: free concerts, gourmet chefs, super-cool experiences that should be once-in-a-lifetime, but end up being more like once-a-week. Mae can’t believe she works in a job that benefits both her and her community, but as she continues to enmesh herself with the Circle, she’s expected to give more to the site. Post her pictures immediately, livestream her experiences, and even allow her sex life to be public.

And that’s not all. The Circle has begun working with the government to create the ultimate transparency so as to assure that all citizens are acting in the best interests of others first. Don’t want to stream the video of your mountain-climbing expedition? Aren’t you taking that experience away from the less fortunate who can’t have that? Trying to hide a fact about yourself from the internet? Aren’t you really lying? As Mae becomes the face of transparency, it becomes clear that when voyeurism becomes normalized, the world’s behavior might improve, but the cost might not be worth it.

Even though all of the obvious errors in Eggers’ world supposedly keep us at a safe distance (such as the universal policy of health care that assumes all bodies are alike), his genius use of timeless pop-culture references and universal topics creates a world that’s not only realistic, but (almost) too close for comfort. At one point, Mae is speaking to Mercer, her ex who makes it clear that he is averse to putting his political opinions online. Mae responds that by not sharing your views, you are condoning the views of the other side, and when Mae looks at Mercer and pleads for him not to be “on the wrong side of history,” Eggers reflects our world back onto us. And yet, this future is strangely enticing. Gadgets and apps that make our lives so wonderful, it seems like a scene from a futuristic TV show. But as Eggers constantly reminds us, if we want the future of The Jetsons, we’re going to have to submit to the Circle first.

With apps like Periscope and Peeple coming on the scene every day, we’re getting closer to the world Dave Eggers is warning us to avoid. Personally, I don’t know if I’m more terrified of the dystopia I’ve read or the dystopia I’m living, but I will say that you should read THE CIRCLE, and let me know when you start seeing signs of the coming apocalypse everywhere.

The Circle
by Dave Eggers 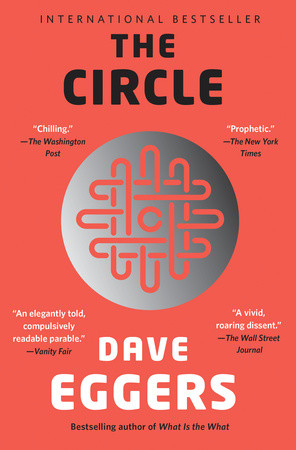 |+| Add to Your Shelf
The Circle
Dave Eggers