When I was seven years old, I became obsessed with New York City. You see, I had just watched my first Nora Ephron movie (You’ve Got Mail), and I knew I’d found the place where I belonged. But that’s just it: it wasn’t New York I loved. It was Nora Ephron’s version of New York.

Nora Ephron loved New York because she loved all the things that made New York the greatest/worst city in the world. She loved the strange bagel places that seem far too pretentious for their own good and the fact that you can get mugged by the nice guy who winked at you on the subway. She knew how to make you laugh, make you cry, and most of all, make you adore the city she called her own through a strange mixture of elegance, charm, and self-deprecation. And that is what makes you adore Heartburn.

Maybe you’ve seen the film adaptation with Meryl Streep and Jack Nicholson, but even so that doesn’t spoil the deliciousness of Ephron’s novel, a roman à clef about her own marriage to journalist Carl Bernstein. In this fun, pocket-sized novel, the very pregnant cookbook writer Rachel Samstat learns that her husband Mark is not only cheating on her, but expects her to be okay with it while he continues seeing the other woman.

Through a delightful trope of Rachel’s memory, we learn about her previous marriage (destroyed by her now ex–best friend), her family life (doesn’t everyone have that perfect goody-two-shoes sister who just has to be there while both parents go off the deep end?), and her current life in D.C., filled with the not-so-obvious politics that accompany being the wife of a D.C. employee (what do you mean it’s not normal to not want to throw a party with the woman your husband is sleeping with?).

Trying to digest the news that her husband was not out looking for socks as he so often told her, Rachel escapes back to her hometown of New York City with her two-year-old son and falls back into her old routines of group therapy, riding the subway, and thinking about the perfect brisket while her father escapes from his sanatorium on a regular basis.

As with all Nora Ephron works, this novel has wit, levity, and most of all, a real honest-to-goodness soul. À la Ruth Reichl, Rachel narrates as if it is her memoir you are reading, trying to insert recipes where she deems appropriate (though some of them are, in fact, in the most inappropriate places for a recipe). While the recipes are sound (this Off the Shelf contributor may or may not have attempted a few of them—the sour cream peach pie if you must know—to delicious results), it’s obvious that Rachel’s mind is not, as she deviates into flashbacks, rants, and every so often, denial of what is happening in her life.

However tragic Rachel’s life seems, though, it’s approached with the kind of light touch and ironic humor that keeps you (and Rachel) smiling. And, as with anything from Ephron, it all comes together with a hilarious scene involving a key lime pie (although Rachel wishes in retrospect that it were a messier pie, like blueberry), a sense of closure, and a return home to the . . . er . . . most complicated city in the world.

Heartburn is one of those books that you read when you’re sick of your life. It’s the kind of book you read when you have fallen into a pit of self-pity or the kind of mood in which you feel like the world may be crashing down around you (even if it’s not true). Nora Ephron is among a small circle of genius mood makers: she is not only a brilliant craftsman and a clever storyteller, she can make you sit up, laugh, forget your troubles, and remember that it’s never as bad as it seems. Especially when you’re in Nora’s world. 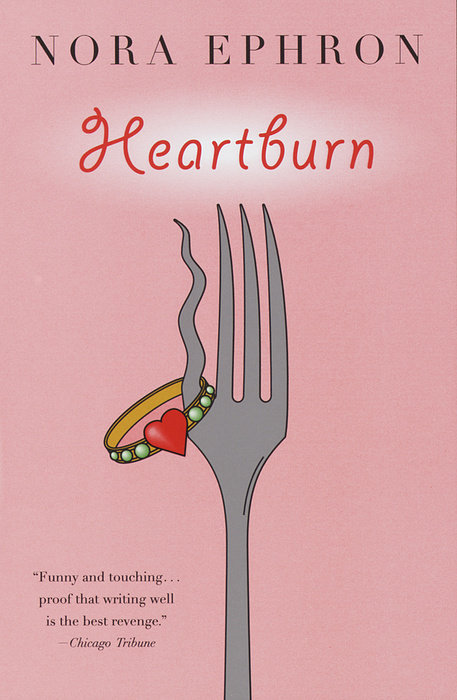 Love Is Dead: The Best Breakup Reads Based on Your Go-To Breakup Album

The 5 Best Novels I Read This Spring

Sometimes All You Need Is Nora Ephron and Blueberry Pie