“Wild,” in reference to the great outdoors, conveys an image of land and creatures untarnished by human contact. Yet the adjective is just as often used to describe humans themselves—the bold, the unfettered, the daring, the dangerous. It is precisely at the intersection of these definitions that great adventures unfold. From Jack London’s novel THE CALL OF THE WILD to Cheryl Strayed’s memoir WILD, the literary canon is replete with tales of man’s negotiation of nature. But for me, an armchair explorer and an avid consumer of literary fiction, few books of this genre make my heart ache in the way of the stories I hold dear. There is just one tale of man versus nature that has enraptured and captivated me in my lifetime, and that is Jon Krakauer’s INTO THE WILD.

Originally a long-form article published in Outside magazine, INTO THE WILD is the true story of Christopher McCandless, who in 1992 renounced all his worldly possessions and human connections to venture into the Alaskan wild. Though arguably ill-equipped for the harsh landscape, he survived for a time by hunting and gathering, and taking shelter from the elements in an abandoned bus.

I have found, in discussing my passion for INTO THE WILD with others, that McCandless’s character inspires a distinct polarization of camps. There are those like me—starry-eyed supporters of his quest to be free of the shackles of society, of the hedonism and material obsession that surrounded him. Then there are those who would label my camp naïve: who was McCandless to venture into the Alaskan tundra so brazenly, nay, so cockily?

The latter sentiment is articulated by one reader of Krakauer’s original Outside article: “Over the past fifteen years, I’ve run into several McCandless types out in the country. Same story: idealistic, energetic young guys who overestimated themselves, underestimated the country, and ended up in trouble.” Those who knew him intimately were often more scathing in their criticisms. McCandless was described as a sullen sort, “characterized by monomania, impatience, and unwavering self-absorption.” Both his total abandonment of his family and his near-pathological resistance to forming substantial relationships during his journey to Alaska seem to support this characterization.

McCandless’s rashness and lack of preparation were originally thought to be his downfall. Weakened and emaciated, he met his demise after carelessly consuming a poisonous plant. But in 2013, an alternative hypothesis came to light, suggesting that McCandless’s death was more nuanced than originally thought. The theory held that he had consumed wild potato, which contains a toxin that would be harmless to a healthy individual, but deadly to a malnourished one. The field guide he was referencing contained no indication of this danger.

So McCandless may have been savvier in the ways of the wild than his doubters acknowledged. With this exoneration, I too seek asylum from the naysayers. I maintain my unflagging passion for the principles of truth, simplicity, and solitude that course through the veins of his unforgettable journey.

Into the Wild
by Jon Krakauer 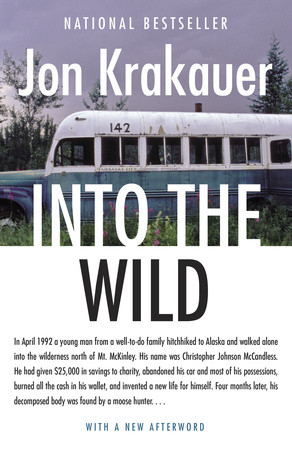 |+| Add to Your Shelf
Into the Wild
Jon Krakauer