Picture this: you are on the subway or the bus, minding your own business, when all of a sudden, someone sitting near you abruptly starts laughing hysterically. You look over, annoyed, and they seem to be reading a book. It’s awkward. You go back to trying to ignore this person. This scenario happens occasionally on public transportation and I am usually irritated by it, but for the past few weeks, that person has been me and the book has been Where’d You Go, Bernadette by Maria Semple.

Called “divinely funny” by the New York Times, Where’d You Go Bernadette is the story of fifteen-year-old Bee, whose mother is the brilliant, manic, anti-social Bernadette of the title. Bee’s parents had promised her that if she achieved perfect grades throughout middle school, she could pick anything she wanted as a graduation present. When Bee achieves this feat, she claims her desired prize: a family trip to Antarctica. Naturally, this sends agoraphobic Bernadette into a sort of anxiety-driven mania. She hires a “virtual assistant” based in India to make all preparations for her, from shopping for gear to booking flights. Meanwhile, Bernadette is waging war with the type-A, super-involved mothers at Bee’s private school, Galer Street School, who constantly judge her and gossip about her eccentricities. She fights their cattiness in her own crazy ways, like having her virtual assistant order and have installed in her yard an 8’ x 5’ billboard reading “PRIVATE PROPERTY NO TRESPASSING Galer Street Gnats will be Arrested and Hauled off to Gnat Jail”. The sign ends up toppling over and destroying her neighbor’s house.

When Bernadette’s erratic behavior comes to a head, her husband seeks help to have her committed to a facility for some “supervised R&R”. However, right in the middle of her intervention, Bernadette goes to the powder room and disappears. Bee is determined to find her mother and collects months and months’ worth of e-mails, texts, letters, and documentation and pieces them together into the full story of the events leading up to the disappearance. Bee’s documents form the contents of Where’d You Go, Bernadette – a modern, hilarious epistolary novel.

Of course, at the center of the novel is the enigma that is Bernadette. She is a unique, funny, tragic, skillfully crafted character. She was once a MacArthur Genius Award-winning architect, who is now being driven nuts by the boredom and lack of creative outlet in her life as a stay-at-home-mom. She hates the parents of Bee’s peers and instead chooses to avoid leaving her home at all costs. She is very much a tortured artist, which manifests itself in manic behavior, extreme overreactions, and seemingly-irrational acts. She is a mystery to the other mothers, and her reluctance to participate and contribute to the community like a “normal” mother angers them. She is flawed and selfish, but is deeply devoted to her beloved daughter. Bee is devoted to her mother as well; Bee’s story is a testament to a child’s unfailing love for her struggling parent. As Bee researches her mother’s secrets and actions, she is also on a journey of self-discovery and coming-of-age. Bernadette and Bee are brilliant foils for one another and their relationship is beautiful in its imperfection.

Much of the comedy in the book comes from Bernadette’s interactions with the other Galer Street mothers – particularly Audrey and Soo-Lin, who constantly exchange e-mails picking on anything unusual or outside of societal norms that Bernadette does. They attack her in dramatic, ridiculous ways (like Audrey pretending that Bernadette ran over her foot in the parking lot and insisting that the principal of Galer Street send a school-wide e-mail naming Bernadette as the perpetrator) and Bernadette strikes back in her own crazy ways (like the giant, house-wrecking billboard). It would have been easy for Maria Semple to make Audrey and Soo-Lin into catty, image-obsessed suburban Real Housewife-type characters – and at parts, they do seem like this. But throughout the novel, we learn about their backgrounds and motivations and the nuances and hardships that drive them to behave as they do, and they evolve as characters throughout the narrative. Semple resists stereotypes and creates real, layered characters that feel like they could be your neighbors.

Where’d You Go Bernadette is a comedy of manners, a sharp social commentary, a moving story about the bonds of family, and a whip-smart contemporary epistolary novel. Don’t want to be that person randomly belly-laughing in a public place? Better read this book in the privacy of your own home. 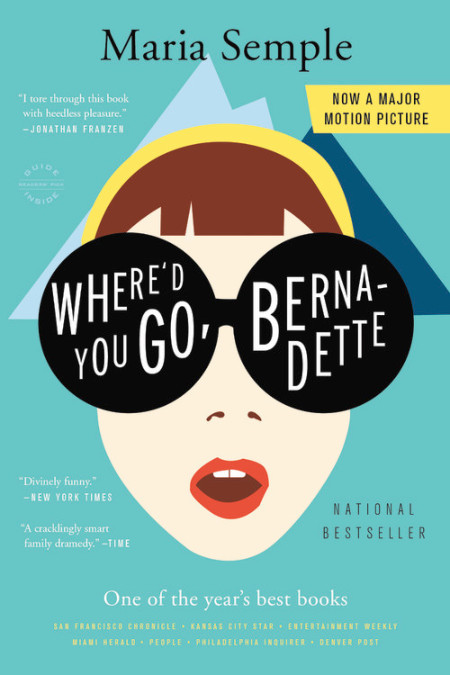 Bernadette Fox is a fiercely independent wife and mother, when one day she disappears. It began when her daughter Bee aced her report card and claimed her promised reward: a family trip to Antarctica. But Bernadette's intensifying allergy to Seattle—and people in general—has made her agoraphobic, making a trip to the end of the earth a bit of an issue. To find her mother, Bee compiles email messages, official documents, and secret correspondence.

6 Books to Read If You Loved “Lady Bird”