It’s 6 am on a Monday and you’re awake. Not because you have work that early, but because your cat, Mr. Snugglegate, is furiously scratching at your face. You throw him off and remember your New Year’s resolution: to start every morning by stretching and doing fifty jumping jacks. You do neither. Instead, you stare blankly at the opposing wall and drool. When you finally make your way to the bathroom, you curse your cat for leaving scratch marks on either cheek. One starts by your nose and continues all the way down your chin. You consider applying makeup. You realize you only have lotion and shaving cream in the cupboard.

While reading on the subway to work, you come across a funny headline, and spill coffee on your dress shirt, which hasn’t been ironed in weeks. Or washed, for that matter.

Your boss brings up the marks on your face and you mumble your way through a half-hearted lie about rescuing someone from the subway that morning. He then asks about the coffee stain. You act as surprised as he is.

You eat lunch at your desk. You dream of spending the afternoon on a beach. You can’t remember the last time you did something memorable. You think about dinner and realize you have nothing other than cream cheese in your fridge. You’re relationship, if you can call it that, is falling apart, you’ve gained weight in all the wrong places, and you’re balding. You used to want to be a US senator. Now, if all goes well, you’d like a small house in North Carolina with a backyard and a wine cellar.

Where did life go?

Truth in Advertising is a humorous, often depressing, look at white-collar life. A life that many can relate to: boring, mostly unfulfilling, and directionless. Fin Dolan, the protagonist, is an ad man. He works for a large agency in New York City. The account he works for? A diaper company. He was once engaged, but got cold feet at the last second. His few moments of calm come while conversing with a significantly younger assistant, a beautiful blonde in her early twenties. He’s estranged from his family, and rarely has friends beyond the colleagues he works with. Fin Dolan is the everyman (or woman) we can relate to. He’s not the brightest or the most creative, but has fantasies of running the department one day. He substitutes sarcasm for empathy; when asked about diapers, Fin Dolan speaks hyperbolically and with much enthusiasm—but inside, he doesn’t believe anything he says.

John Kenney spent over fifteen years at an advertising agency, the much lauded Ogilvy & Mather, before turning to writing and screenplays. His writing, among other places, can be found in the “Shouts and Murmurs” section of the New Yorker. Kenney is funny. But the book is more than just an exercise in humor. It’s a clear-eyed lens into the insecurities that beset us all during adulthood, and the often tougher-than-nails mentality that we have to accept in order to wake up every morning. Sure, it’s not true suffering. But not all of us are heroes, or have the capacity to change the world. Most of us have to deal with work-life balance, with putting aside money for a rainy day, with finding meaning in the lives we already lead. In this way, Truth in Advertising is a wry and touching tale, and one that channels the realities of everyday life we hopelessly try to avoid, or at least ignore by virtue of the lies we tell ourselves when we wake up each morning.

Truth In Advertising
by John Kenney 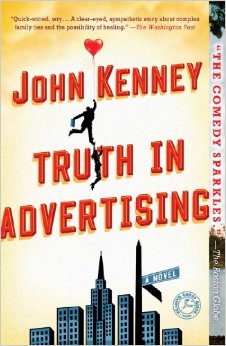 |+| Add to Your Shelf
Truth In Advertising
John Kenney

12 Literary Families to Invite Over for Thanksgiving

A Wry and Hilarious Novel About the Insecurities of Adulthood