I didn’t know anything about Tricks, by Ellen Hopkins, when I picked it up in 2009. I just thought the cover was interesting. Then, I read the blurb on the cover jacket and thought, “Whoa. This sounds intense.” And my instincts were right. This book made me angry. I wanted to do something to help the protagonists, even when they were doing horrible things to survive. I wanted to save them from themselves, to protect them, to tell them they’re worth everything in the world and to hug them until they believe it.

Wait a minute, gang. I’m way ahead of myself here.

Told in blank verses of poetry, Tricks is laid out in stanzas on the pages, and the poems contain other poems within them (you’ll see what I mean). The fictional story that unfolds tells of five young people who, through various circumstances, end up surviving in Las Vegas as underage prostitutes, “turning tricks” to survive the rotten hands dealt them by their families and lives. Eden, Seth, Whitney, Ginger, and Cody come from families of various economic classes, religious upbringings, and sexual identities. As they all begin to experience what loves means to them, their young lives take turns both unfortunate and misguided. You’ll see how it’s very possible that young people end up in bad situations that no one ever intends or believes will happen to them. And it’s not a life of high-priced call girls and boys. It’s grotesque and horrifying. It’s the kind of stuff no one should ever have to deal with.

Reading this book just made me so angry. How can society let its children fall through the cracks like this? I found it hard to separate the knowledge that this was fiction from my emotions. A work of fiction rarely summons such anger in me. I read a few chapters, and then I thought of friends in my life who work to bring sex-traffickers to justice. I thought of other friends who dismiss these young victims and essentially blame them for their lives (“They know it’s wrong,” “What do they expect,” “They can run away if they really want to,” etc). And I keep thinking about the times I felt sad, alone, or isolated when I was younger. Sure, I was very lucky to have lots of friends to help when times got tough. But I know many others, like these fictional characters, who have no one. And when such people are without choice, without advocates, without the tools that a well-informed adult has . . . well, it’s not hard to fathom that it’s possible for kids to slip through the cracks.

Maybe that’s why Tricks made me angry. Maybe sometimes a book upsets us because we realize that we don’t do enough to help others in our world. And maybe we are inspired to do something about it. I certainly was. Feel free to write me and ask me about it. I’ll happily tell you about my efforts to help make the world a little better. And while you’re at it, tell me what you do to make the world better, at kevin.myers@simonandschuster.com. 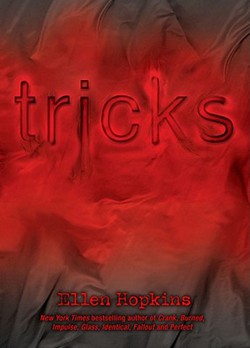 Notice: Trying to access array offset on value of type null in /home/offtheshelf/public_html/web/app/themes/ots/_inc/template-parts/books/book-modal.php on line 31
|+| Add to Your Shelf
Tricks
Ellen Hopkins