I think I read about The Passage by Justin Cronin in an industry newsletter shortly after it hit the stores. Something about literature and vampires. I thought, “Well, as long as it’s not Twilight, I’ll give it a stab.” I wish I could remember the blurb that I read. But I downloaded the book (it’s lengthy—the hardback version clocks in at over seven hundred pages!), and I started to read.

I was flipping out. I couldn’t believe that I was reading about post-apocalyptic vampires in a beautifully written and action-packed style in a book that wasn’t YA and that didn’t pander to the fast-paced, plot-driven books that seem to be everywhere these days. OK, I know I prefer something like that over literature’s exploration of history or descriptive language or character development, etc. I found that the story goes on many tangents on the most minor of characters, but I was perfectly happy to read them all. I knew it would come back to the forward motion of the main story, and that story would suddenly have empathy or sympathy for even the most vile characters and actions.

The story begins in the near future with a girl named Amy, who seems to possess a special gift. Two FBI agents are hunting her down for a government experiment. But one agent decides to go rogue and risk his life to save her from the experiment. (Hint: Vampires are involved, but super-cool ones! No glittery Edwards or Lost Boys here.) As the experiment goes wildly wrong and North American society collapses, Amy will wander the land for years and years, and she has only a vague notion of the power she wields. Then we flash-forward eighty-nine years, and the story focuses on a small California colony of survivors. Every night they must defend themselves in their walled community from the “virals,” Cronin’s chosen word for “vampire-monster-super-creature things.” They move through the days, surviving under nighttime UV lights and defending themselves with leftover weapons and ammunition from almost one hundred years ago. Their survival is complicated by the arrival of a young teenage girl (hmmm) who may have been alive far longer than she lets on.

What amazes me most about this book is that it takes the popular trend of vampires and turns it into a futuristic battleground for survival on a biblical scale. It’s beautiful, even as people die and betray and help each other. And even the minor characters are absolutely captivating as Cronin describes backstories and lives with far more depth, beauty, and horror than one might fathom.

I hate using this word, but this story is truly “epic.” It spans time, space, and natural vs. supernatural. It’s not a fast read, and that’s cool. You won’t want it to end. So pick up the sequel (The Twelve) when you’re done. 🙂

The Passage
by Justin Cronin 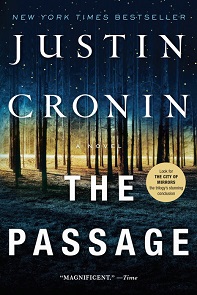 Notice: Trying to access array offset on value of type null in /home/offtheshelf/public_html/web/app/themes/ots/_inc/template-parts/books/book-modal.php on line 31
|+| Add to Your Shelf
The Passage
Justin Cronin