My relationship with Miranda July began a mere three weeks ago, when disaffected 20-somethings across the nation—ahem, across northern Brooklyn—alighted upon her whimsical “Somebody” iphone app. Through this app, one composes a message complete with stage direction and selects an intended recipient. Once finalized, this message “floats” until an enthusiastic dramaturge seizes the opportunity to deliver it. Thusly, you might arrange for your estranged lover to receive such a tender message as “I folded my laundry today and I didn’t even cry! I thought you should know [SMILE REALLY BIG].

To my knowledge, which is wholly based on the fact that a grand total of 2 people I know have installed the app, it hasn’t really taken off. Why, you might ask, has such a cleverly innovative messaging system not garnered a broader audience?

Because, much like July’s short story collection, No One Belongs Here More Than You, the Somebody app does not jive with our everyday lives as pressed New Yorkers. Rather, Miranda July’s creations thrive in a zany alternate world, a world where there is no shortage of people who would gladly deliver a theatrical message to a stranger. In her world, characters extract universal truths on life and love from the everyday and mundane moments are infused with a twist of surrealism. A couple hired as background extras connect over a mimed meal, only to realize that their relationship has run its course. A young woman conducts swimming lessons for the elderly—on her kitchen floor. Two teenage girls construct a basement in their second story apartment. Despite the unlikely nature of these scenarios and the utter illogicality of the characters’ thought processes, I found myself so dazzled by the delicately spun tales that I barely questioned their validity. Miranda July has mastered the suspension of disbelief.

Her film Me and You and Everyone We Know is the visual counterpart to her written collection. Its characters float through July’s dream world with a combination of earnestness and gravity by turns painful to behold, and by turns delightful. In one such scene, John Hawkes, playing a recently separated father of two, douses his hand with lighter fluid and sets it aflame. When asked what happened, his response is simply: “I tried to save my life but it didn’t work.” A response at once poignant and flippant, this statement perfectly embodies July’s dreamy sensibility.

The beauty of No One Belongs Here More Than You is that it defies abridgment; one can only truly appreciate the work in full. Even as I write this review, I fear that my indelicate summary renders July’s characters as little more than unhinged lunatics. But infused with her captivating whimsicality, they become sympathetic and deeply complex characters. I was lucky to spend several long morning commutes floating away from my packed train car, absorbed in their world.  Miranda’s new book  is being published in January and I can’t wait.

No One Belongs Here More Than You
by Miranda July 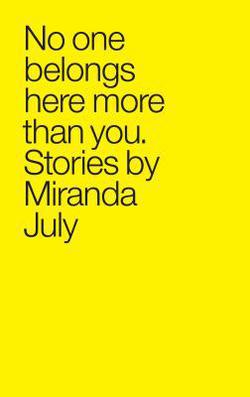 In Broad City’s interview with Sleater-Kinney on NPR Music, Carrie Brownstein recommended Miranda July’s new novel, The First Bad Man. We’d like to draw attention to July’s acclaimed short story collection, No One Belongs Here More Than You. July’s stories and films are known for their whimsy and awkwardness, and Broad City’s colorful, chaotic, absurd version of New York has a degree of that as well.

9 Books to Check Out During Library Lover’s Month

7 Books for Fans of Broad City

Enter a World Where Belief is Suspended

Hannah Horvath is My Best Friend: Books to Read When Not Watching HBO’s GIRLS