Some books, when read, feel like swimming through a swamp. The weeds interfere with your stroke, and the smell, pungent and biting, sears your senses. Once you’ve reached the other side, the difficulty of the swim becomes a sign of accomplishment, of an obstacle overcome. Other books, when read, feel like eating a rich chocolate cake. Every bite is heaven on earth. You eat and feel slightly ashamed, but you finish nonetheless. Coventry Patmore likened Shakespeare to roast beef, Anne Fadiman once wrote. These associations are helpful, if completely abstract. For example, I recently read a book that I felt was frivolous and self-serving—like a drawn-on mustache. Say what you will of my metaphors, they’re more meaningful to me than the easy “a work of dazzling beauty.” And so here I go: The History of Love by Nicole Krauss is like finding a cove on an abandoned beach where large turtles come to lay their eggs.

In his youth, Leopold Gursky wrote a novel in Yiddish called The History of Love, which is an extended love letter to his then and only love. During the war, Leo and his sweetheart are separated, and she flees to America. Leo, having lost everything, also travels to America, arrives in New York, and becomes a locksmith, the only profession available to him through family connections. Decades later, a young girl named Alma Singer begins looking for a way to bring her widowed mother out of her depression. Her mother is working on an English translation of a book called The History of Love. Alma, an earnest teenager, searches for clues within the book, hoping to find amongst its passages a way to make her mother happy again. This book, however, is not penned by a so-called Leo Gursky. In fact, it’s a book written in Spanish and found in a used bookstore while Alma’s now deceased father was traveling through South America. And Alma, in her search for a cure to her mother’s unhappiness, comes to learn not only the truth about this unusual little book, but also the meaning behind her own name.

The History of Love is a story within a story, while also carrying an undercurrent of several other stories: These are sentimental, nostalgic, and searching. It is a novel carried by the power of voices, each distinct and vulnerable, and wholly human. When I finished reading it, I sat quietly for some time. That silence—between reading the last word and until I got up—remains with me still.

The History of Love
by Nicole Krauss 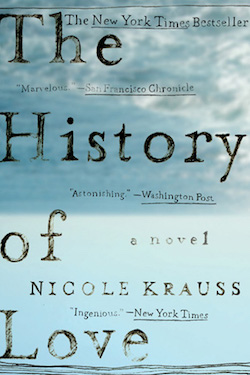 |+| Add to Your Shelf
The History of Love
Nicole Krauss