One of life’s pleasures is to accidentally find a book that completely engrosses you so much that you are transported to a different time and place. One of life’s sorrows is finding a book that engrosses you so completely that you read it too quickly, and before you are ready, POOF—it is over. Where only yesterday during your morning commute you were standing in an English manor house puzzling out a sixty-year-old mystery, today you are on a crowded subway looking at the people across from you and wondering how you got here.

In Pale Battalions by Robert Goddard is that kind of book. It starts off slowly; in fact, you might be a little bored at the beginning. Leonora, a recent widow, travels with her daughter, Penelope, to the Thiepval Memorial in France, which was built to commemorate the soldiers who died at the Battle of the Somme. Leonora has come here in order to share with her daughter the mystery of her birth and the story of her life. They look up the details of Captain John Hallows, Leonora’s father, and Penelope realizes that her mother was born a year after her father fell in battle. Her mother’s illegitimacy is what Penelope believes she is there to learn, but that is just the tip of a twisted, compelling, multi-character story that keeps her and the reader guessing till the end.

Leonora begins to tell Penelope the story of her youth, and with that you are swept back to Meongate, the ancestral home of the Hallows family, ruled over by Lord and Lady Powerstock. Leonora is an orphan, her father dead in the war and her mother dead from giving birth. The only family she has left is her cold, distant grandfather and his vain, manipulative second wife, Olivia. In Olivia, Robert Goddard has created one of the most evil, nasty bullies I have ever met. Maleficent would be proud to call her sister.

When she is fifteen, Lord Powerstock dies and Leonora’s life goes from bad to worse as she is left alone with Olivia, trapped by shame and fear after learning the truth about her birth and finding that she has been disinherited by her grandfather and left penniless. She spends years enthralled to Olivia until she manages to escape into a loving marriage.

At the beginning of this book you think you are going to read Leonora’s story, but in fact hers is just a prelude to the brilliant, complicated story of her parents, the war, a murder, unrequited love, and some serious treachery. Part two is told by Lieutenant Tom Franklin, a fellow officer who fought alongside Leonora’s father and winds up at Meongate to recuperate from wounds he received at the front. (Think the soldiers who convalesced at Downton Abbey.) He is an outsider who does not fit comfortably into the world of the aristocracy and believes he is immune to their wiles, but he is not, and soon he finds himself pulled deeper and deeper into the world of half-truths and buried secrets that is Meongate until he winds up the prime suspect in a murder investigation. Franklin works to untie the knots—as you realize Leonora has tried to do for so many years—but he can only get so far and the story is picked up again by Leonora.

Everywhere you look in this story there is trickery and deception, and just as you think you have figured it out—like Leonora—you are presented with a new clue or conundrum that changes your mind completely. I felt like I was reading Daphne du Maurier.

I was hooked by the writing and the story till the very satisfying end and was truly sorry when it was over. Now I guess I’ll have to find out what else Robert Goddard has written for my subway ride home.

In Pale Battalions
by Robert Goddard 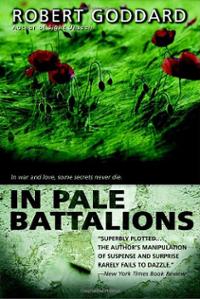 |+| Add to Your Shelf
In Pale Battalions
Robert Goddard

In the best tradition of British storytelling, here murder, deceit, family honor, and intrigue are intricately woven into a compelling drama of decadent British aristocracy set during World War I. Leonora Galloway reveals the mysteries of her twisted upbringing to her daughter while they are visiting the battlefield monuments of WWI. You can not put it down.

Some Desperate Glory: 9 Novels Reveal The Loves, Loses, and Lives of WWI