It is 1892 on a vast estate in the north of Ireland and Harriet, an aristocratic mother of nine who has managed to beat eight of her children into a form of submission, is losing the battle to control her youngest daughter, Charlotte. Unable to cope with Charlotte’s stubbornness, Harriet locks her in a cabinet, a common enough punishment in the household, and one all the girl’s brothers have endured more than once. Hours later, having been forgotten, Charlotte’s lifeless body is found in the cupboard by her distraught mother and a housemaid. Harriet is subsequently arrested for causing her death.The story of Charlotte and what happened that day is told in the alternating voices of Harriet, in diary entries she made during the year she spent in jail for the murder, and Maddie, the housemaid turned nanny whose part in the death is not revealed until the final pages.

Harriet, a sort of anti-Lady Grantham, is not a sympathetic character at all and yet you come to understand that she is behaving as she was taught to behave. She is from a class that believes itself above reproach. All domestic matters are ceded to her by her husband, who spends his days hunting and running the estate, and the servants do not go against their mistress’s wishes or they will be out of a job. She rules with an iron fist.

She is a young Scottish girl married to an Irish Catholic son of a lord when she comes to live in the Gothic castle—Oranmore—in Donegal. She had wanted to be educated, but her sister Julia, who comes to live with her, was the one her parents chose for that option. Harriet was to be married. Her relationship with her artistic sister, in every way Harriet’s opposite, adds just the right tension. They need each other, but they do not like each other.

Harriet’s two great joys are riding and butterfly collecting, both of which she does with a patience, devotion, and care that she is unable to show her children. The author is excellent at revealing in Harriet and in her husband, Edward, the aloof imperiousness of the ruling class. Even as she sits in prison, Harriet never admits she has done anything wrong—only that something wrong has occurred. But it is someone else’s fault; she, after all, behaved as she always had.

Maddie, the nanny, tells her story in a chatty, deceptively cheerful way to Anna, Harriet’s granddaughter, who was her charge for years. Maddie is in a nursing home and has only a little while left to set the record straight on what really happened that day. A classic trope, but this story has layer after layer in it and deception upon deception, some you suspect and others that you don’t even see coming. And when the truth is revealed, as satisfying as it is, you aren’t sure it’s the whole truth, because neither of the narrators has ever been honest with herself.

This is the kind of book you read and have to talk to someone about immediately. It is a perfect book club book or one to pass around during vacation—the only drawback is that you will hound the other reader to find out when they will finish.

The Butterfly Cabinet
by Bernie McGill 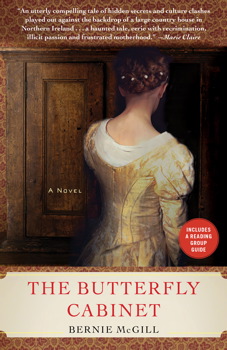 |+| Add to Your Shelf
The Butterfly Cabinet
Bernie McGill

When former nanny Maddie McGlade receives a letter from the last of her charges, she realizes the time has come to unburden herself of a secret she has kept for more than seventy years: the truth behind the death of Charlotte Ormond, the four-year-old daughter of the wealthy household where Maddie was employed as a young woman. Based on chilling events that actually took place in the north of Ireland in 1892, this is a dark, emotionally complex novel that explores the dark side of turn-of-the century aristocracy. Charlotte's mother, Harriet Osmond, is violent, abusive, and (what else?) an avid lepidopterist.

The 10 Most Popular Books of April

The 10 Most Popular Books of March

Rediscovered Reviews: 10 Great Reads You May Have Missed

Irish Women Write: 5 Novels as Varied as the Shade of Green

Pinned and Mounted: Literary Butterfly Collectors That Will Make Your Skin Crawl