It is often the case for readers that the book is better than the movie. For me, the film that was made of THE ENGLISH PATIENT by Michael Ondaatje is no exception. I remember watching the movie back in college and thinking, “This is supposed to be great—but why? I don’t get it.” I don’t even remember being aware that it was based on a fantastic book. And only a month ago, I admitted to some friends that I had never actually read the book because“I didn’t know this was a book.” Cultured and classy. That’s me.

THE ENGLISH PATIENT is about a quartet of people who take shelter in an Italian villa during the final days of World War II. The titular patient is a man who was burned beyond recognition in a plane crash and slowly reveals his story and identity. His nurse, a young woman named Hana, cares for him by choice and utterly on her own. A family friend of Hana’s, Caravaggio, discovers the pair and suspects there’s much more to this English patient than either he or Hana is willing to reveal. The fourth person is an Indian bomb defuser—a “sapper”—named Kip who is working methodically to clear the area of German mines. As the war fades, the four of them struggle to make sense of the world that now exists as they also learn to acknowledge their place in it.

I started reading and thought, “Grrr. Literature. Me want crazy spy novel. This better be good.” But they say it’s better than the movie, give it a chance. When I got to page seventeen, I thought, “Ooh. I’m into this. I can dig it.” And by the end of Part One, I thought, “Wow! I’m really enjoying this!” I realized I had discovered the sensuality of the book, and I mean that in the original sense of the word. Reading Ondaatje’s work, I could sense the winds that blow through the North African desert; the weight of fabric on Hana’s skin; the dissociated state of the English patient’s mind and body; the effect of a woman’s voice on a man as she reads Herodotus; the visceral reaction to the horrors of war, disease, and death, even as the characters surround themselves with a cocoon of patchwork family.

I’m reminded that part of enjoying a good book is simply allowing it to unfold. We must learn to resist the urge to have everything spelled out or visualized. The immediacy and ubiquity of film and television make any story so easy to absorb. It takes some time and a real desire to let a writer do the work for you as you read. Let him guide you through it—it’s his story. Draw your own conclusions about what’s happening and why, judge the characters if you must, but just let the very sensual nature of this novel flow over you. It’s lovely. And yes—it’s so much better than the movie.

The English Patient
by Michael Ondaatje 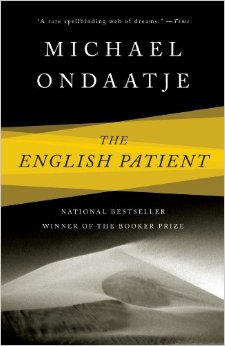 Notice: Trying to access array offset on value of type null in /home/offtheshelf/public_html/web/app/themes/ots/_inc/template-parts/books/book-modal.php on line 31
|+| Add to Your Shelf
The English Patient
Michael Ondaatje