Ever since the Winter Olympics in Sochi and Russia’s invasion of Ukraine, I’ve become fascinated once again with the Russian people and culture. I was just a kid when The Russia House by John le Carré was published. I don’t remember it, but I do recall Ronald Reagan’s “”evil empire” speech. I remember Rocky IV, Russkies, Red Dawn, and The Police singing about “Russians.” We Americans have been conditioned to distrust Russia in the modern age, and not for nothing. But looking east now, as an adult, I wondered if the great spy novels from the 80s still held up. You know what? They do. They absolutely do. Even though it was written when glasnost was thawing Russo-American relations and Gorbachev was opening the USSR, The Russia House is a super-cool Russian spy novel that still seems relevant today.

In this story, Barley, an English publishing executive, receives a manuscript at a trade show in Moscow from Katya, a Russian editor who fearfully tells him it contains anti-USSR material written by an important Russian scientist. She begs him to take the manuscript to England and give it to the right people there. He does, and what ensues is a cat-and-mouse game between MI6’s Russia House (a small British spy unit focused on Russian intelligence) and the KGB. Our narrator is Palfrey, a member of the Russia House, and he relates the capers between Barley, Katya, and Palfrey’s agency staff as they try to uncover the meaning of the damning manuscript.

What I love about this book is that there are no cell phones, and no Internet to rely on. It’s just spies relying on human interaction, covert and overt meetings, landline telephones, and desperate physical work to get that coveted knowledge. How can we communicate to younger readers that the age of the Internet makes knowledge so incredibly easy to find today compared to only 20–30 years ago? Chasing a few facts or stories is much easier nowadays for regular folks, but can you imagine how spies did it without all this electronic connection a mere generation ago?

There’s real tension in these pages as Barley tries to uncover what exactly Katya knows, or doesn’t know. Her contacts, his superiors, and their budding romance complicate everyone’s efforts to know what the hell’s going on. The images of racing through bleak Moscow streets and buildings, the paranoia of feeling like you’re being watched, believing that the whole of civilization rests on what you reveal and what you withhold . . . it’s fantastic.

For me, modern spy novels feel so far-fetched. This book made me remember why spy novels can be so outstanding. The Russia House didn’t need modern spy equipment and smartphones to dazzle me. It just relies on my own fears, indoctrinated or instinctive. 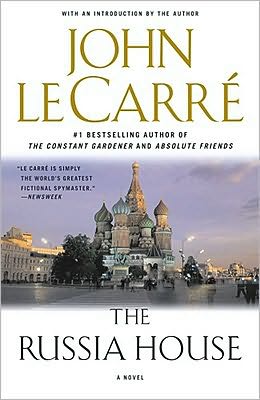 Notice: Trying to access array offset on value of type null in /home/offtheshelf/public_html/web/app/themes/ots/_inc/template-parts/books/book-modal.php on line 31
|+| Add to Your Shelf
The Russia House
John Le Carre