There are certain topics of conversation Americans avoid like summer mosquitoes—we find them unpleasant, more than impolite, and they make us uncomfortable. When they are brought up, eyes turn downward and lips tremor, the outward appearances we have worked hard to maintain shrivel and fade, we become defensive or angry, and we can no longer keep ourselves straight.

For Paul Fussell in Class: A Guide Through the American Status System, “class” is that dirty topic no one wants to talk about, and in this book he dives headfirst, with a prickly precision, into uncovering its character. There is a reason he chose class and not, say, religion or race or gender. He is interested in the choices we make, and what those choices say about us. While race and gender are visible, they aren’t chosen. Religion and politics, he argues, are chosen, but rarely visible. Class signs, on the other hand, are visible everywhere. Keep in mind that this book was published in 1983 and it reflects a perspective of America in keeping with its time, but it certainly hasn’t lost any of its luster or clarity of judgment. The sensitive modern reader may admonish Fussell for his obvious omission of race, an essential ingredient of American society, but I’d argue that he instead wrote about what he knew. And the American class system has found no better canary, in my opinion, than in this mischievous professor.

Each bracket has their own sense of what class implies in America: for the lower classes, it’s money; for the middle classes, it’s education and employment; for the upper classes, it’s taste. But no group is outside the gaze and judgment of others. No person, however unique or individual they may perceive themselves to be, can escape their class indicators. Those who deny the existence of class in America are irrefutably projecting their middle-class sensibilities, for the middle class, more so than any other group, is an anxious bunch. They fear falling a few rungs, they fear appearing out of step, of seeming uncivilized or uneducated, of offending anyone or tarnishing their reputation. These are the people who preside over their front lawns with a neurotic obsessiveness, making sure no impurities break the surface. They prefer non-controversial art, like beach scenes or flying doves, they offer few opinions on politics, they rarely discuss sex. They are the tourists in Hawaii and the groups who fill cruise ships.

Upper-middles are the lawyers and doctors and investment bankers, the ones who yacht and “vacation,” the group that only wears organic clothing like cotton or wool, who are well educated and identify themselves by their Ivy affiliation or some other East Coast tribe, who play lacrosse and attend debutante balls. The proles (also known as the working class, and a term popularized by that other great observer of class conflict, Karl Marx) enjoy bowling, wear inorganic clothing with silly or generally debase monikers and epigrams like “Will Drink for Free,” or “Big Nasty,” or “Kiss Me, I’m Fat,” which, in the absence of any public respect or notice, act as a way of saying, “I’m here, pay attention to me.”

Yes, the book is offensive. But I found myself returning to it over and over again, reading it like it was an electrified sermon, hypnotized. I hadn’t read anything that so clearly picked apart our habits, our gestures, our ways of seeing ourselves and our ways of judging others. And doing so with such dry, effortless wit, you’d think you were reading satire. But no, we as Americans are a funny bunch. We have our class habits and we have industries that market specifically to each group. Fussell uncovers this sinister Möbius strip, how clear and obvious it all is, and yet shows us to be helplessly ignorant of the roles we play, going along like children trying to impress the parents in our heads.

The book is funny. The book is harsh. The book is critical. But it is not dishonest or insincere. It doesn’t privilege any one group. It pokes at our innermost insecurities and has them dash into the light. It shows us who we are and why, when all is said and done, we’re not as cool as we think we are. 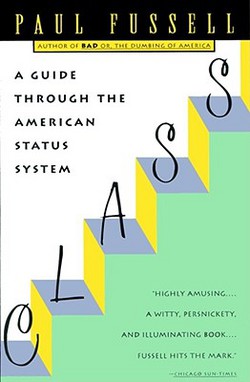 “I chose Paul Fussell’s Class for many reasons. It is a book lost to history. It is rarely, if at all, discussed today. I myself stumbled upon it by chance. It is also dated: it satirizes the post-war era of American class relations, and identifies tropes indicative of that era. However, the persnickety observations, the sly, often patrician tone of the writer, and his comic shrewdness make this book, in my eyes, a timeless work of creative nonfiction. And it is as biting as it is true. I’ve read nothing else like it. A diamond in the rough just waiting, demanding to be rediscovered.” —Pronoy Sarkar (Read Pronoy's review of Class here.)

Happy Birthday to Us!