When I urge friends of mine to read Stephen King (as I often do), I am frequently met with the same response: “Oh, I can’t read those books, they’re too scary!”  My answer is always, try 11/22/63.  This novel is profoundly different from his previous body of work; in 11/22/63, the master of horror has tackled historical fiction.  In an interview with the Wall Street Journal, King said of the novel, “This might be a book where we really have a chance to get an audience who’s not my ordinary audience.  Instead of people who read horror stories, people who read ‘The Help’ or ‘People of the Book’ might like this book, if they can get the message.”

The novel centers on Jake Epping, a high school English teacher living in the year 2011.  After a trip to the local diner with his newly-graduated GED student Harry Dunning, Jake is approached by the diner’s proprietor, Al Tempelton, who has a fantastical story and a monumental request.  In the pantry of his diner, Al has discovered a portal through which one can travel to the year 1958.  Al’s mission was to go back into the past and prevent the 1963 assassination of John F. Kennedy, which he believes would dramatically alter the future for the better.  However, he has developed terminal lung cancer and cannot complete his mission; his dying wish is for Jake to finish what he started.  Jake agrees to take up Al’s cause but he also has his own cause to pursue: saving Harry Dunning’s family from the horrible tragedy he knows will befall them in October of 1958.  With his knowledge of history and Al’s extensive research on Lee Harvey Oswald, both tasks seem attainable, but the past is obdurate – it does not want to be changed.  When things go awry, Jake figures he can go back through the portal, “reset” the past, and try again.  But as the best of intentions produce catastrophic results, it becomes clear that every move Jake makes has unforeseen consequences – and the portal may not provide endless do-overs.

I can’t be sure what “message” King is referring to in his quote to the Wall Street Journal, but for me the novel holds many poignant and universal questions.  Of course, the novel addresses the ever-popular theme of the historical “what if”.  It is truly thrilling to go along with Jake on his mission, following Lee Harvey Oswald in the months leading up to the assassination and knowing that every conversation and moment is a precursor to an event that will change the course of history.  But is it possible to “fix” the past without destroying the future?  The so-called butterfly effect comes to chilling life throughout the novel, raising doubts about whether Jake’s mission is advisable, or if it will actually bring about any good at all.  The novel also delves into questions of the individual versus society – is saving the life of a loved one worth more than securing the future of millions of strangers?  How much can the life of one man truly impact the shape of history?

Lovers of character-based, realistic fiction will not be disappointed – King’s characters are well drawn and have a depth that makes the reader truly invested in their actions and relationships.  Even King’s villain, Oswald, is multi-dimensional: he is an odious, violent man, but in the months that Jake has him under surveillance, Oswald has moments of tenderness, especially towards his young daughter.  The novel is impeccably researched, down to the last detail about the price of a root beer in 1958; this level of detail and accuracy will appeal to the history buff or Kennedy-assassination junkie.  Romance isn’t lacking here either: during his pursuit of Oswald, Jake meets a young woman named Sadie who, despite being born in a different generation, is undoubtedly his soul mate.  Their love complicates and enriches the novel, giving it the feeling of a time-traveling romance like “The Time Traveler’s Wife”.  And for King’s legion of fans, there is the looming, uncomfortable feeling that Jake is being pursued by some malevolent entity that would rather see him dead than successful.  Plus, naturally, tidbits from the King-verse: one of my personal favorite scenes is an encounter Jake has in Henry Dunning’s hometown of Derry, Maine, with Beverly and Richie of King’s 1986 novel, It.

Regardless of what genre of literature one prefers, 11/22/63 comes down to this: it is a gripping, harrowing, tragic and beautiful story about love, memory, evil, and how the best of intentions can go awry.  The ending is wrenching and pitch-perfect.  This is the kind of novel where, upon finishing, you will want to be left alone for hours to just think about it, before diving right back in for another read.  This is King for the faint of heart, for the history buff, for the romantic – for everyone. 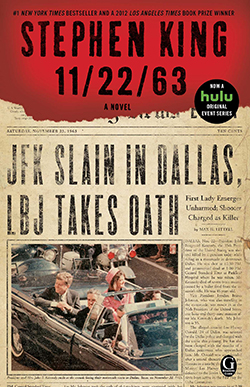 “Regardless of what genre of literature one prefers, 11/22/63 comes down to this: it is a gripping, harrowing, tragic, and beautiful story about love, memory, evil, and how the best of intentions can go awry... This is King for the faint of heart, for the history buff, for the romantic—for everyone.”

On the Road: 5 Books That Took Me Coast to Coast This Summer

11 Groovy Books That Will Transport You Back to the ‘60s