If you’re below the age of 40, you’ve probably dipped into the online dating game at least once—even if it was just to see what it was like. I can attest: it’s awful. However, these six romance novels make me believe that finding love in the digital age (and during a pandemic) might be possible and worth it after all. 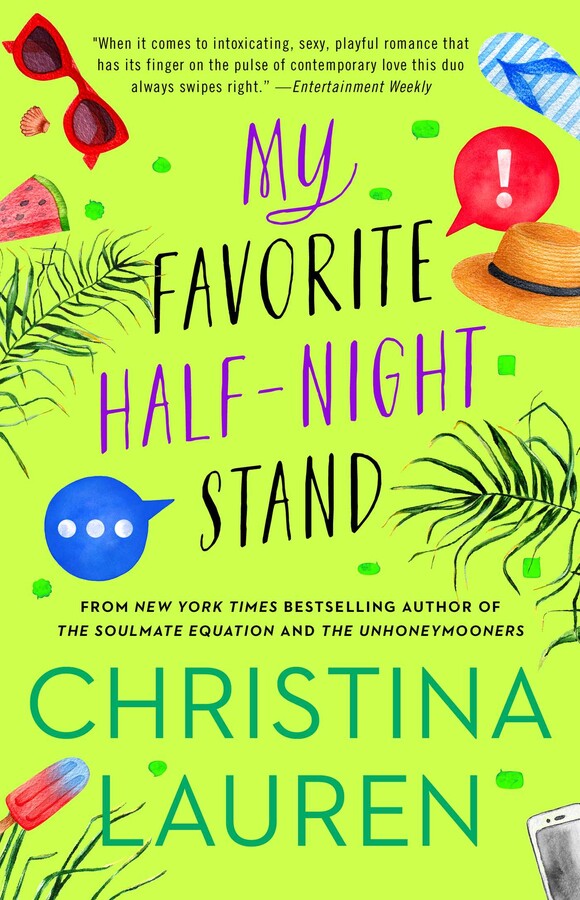 MY FAVORITE HALF-NIGHT STAND is a fun twist on the friends to lovers trope that the writing duo Christina Lauren are so good at delivering. When Millie Morris takes her friendship with fellow professor Reid Campbell to the next level in a sexy half-night stand, they soon decide that it’s better for everyone if they stay “just friends.” But when Millie creates a fake online persona, Catherine, to ward off creeps on dating apps, she finds herself opening up to none other than Reid, himself. But can she salvage a relationship that is founded on the basis of a lie?

|+| Add to Your Shelf
My Favorite Half-Night Stand
Christina Lauren

By the New York Times bestselling author who “hilariously depicts modern dating” (Us Weekly), My Favorite Half-Night Stand is a laugh-out-loud romp through online dating and its many, many fails.

Millie Morris has always been one of the guys. A UC Santa Barbara professor, she’s a female-serial-killer expert who’s quick with a deflection joke and terrible at getting personal. And she, just like her four best guy friends and fellow professors, is perma-single.

So when a routine university function turns into a black tie gala, Mille and her circle make a pact that they’ll join an online dating service to find plus-ones for the event. There’s only one hitch: after making the pact, Millie and one of the guys, Reid Campbell, secretly spend the sexiest half-night of their lives together, but mutually decide the friendship would be better off strictly platonic.

But online dating isn’t for the faint of heart. While the guys are inundated with quality matches and potential dates, Millie’s first profile attempt garners nothing but dick pics and creepers. Enter “Catherine”—Millie’s fictional profile persona, in whose make-believe shoes she can be more vulnerable than she’s ever been in person. Soon “Catherine” and Reid strike up a digital pen-pal-ship...but Millie can’t resist temptation in real life, either. Soon, Millie will have to face her worst fear—intimacy—or risk losing her best friend, forever.

Perfect for fans of Roxanne and She’s the Man, Christina Lauren’s latest romantic comedy is full of mistaken identities, hijinks, and a classic love story with a modern twist. Funny and fresh, you’ll want to swipe right on My Favorite Half-Night Stand.

|+| Add to Your Shelf
Playing with Matches
by Hannah Orenstein

Sasha Goldberg is good at finding happy endings for clients in her matchmaking business, Bliss, in PLAYING WITH MATCHES by Hannah Orenstein. She makes Tinder seem a lot less intimidating than it is in real life—but if Sasha were behind the wheel of my match-ups, maybe it would be! However, finding a happy ending for herself seems more complicated when the One for her ends up being the one that breaks her heart, and a former client—who is totally off-limits—is the only man to catch her eye.

|+| Add to Your Shelf
Playing with Matches
Hannah Orenstein

Old and New: The Best Novels to Read If You Loved These Classics

11 of the Best Beach Books to Read this Summer

|+| Add to Your Shelf
The Right Swipe
by Alisha Rai

In THE RIGHT SWIPE by Alisha Rai, Rhiannon is a dating app developer...who has been ghosted on her own app. When Samson, the pro-footballer who did the ghosting, reappears in her life as an associate of her business rival, the stakes become much higher than simply hurt feelings over a missed dinner date. This couple will get a second chance at a right swipe, though, in a thoroughly modern look at love!

|+| Add to Your Shelf
The Right Swipe
Alisha Rai

|+| Add to Your Shelf
Once Ghosted, Twice Shy
by Alyssa Cole

I love Alyssa Cole’s Reluctant Royals series and the ONCE GHOSTED, TWICE SHY novella was a great addition. When you start online dating, you assume that if you ghost someone, that’s it—you’ll never see them again. That’s not quite the case when Likotsi meets the woman who ghosted her, Fabiola, on a stalled train in New York City. Fab asks Likotsi out for a cup of tea and a chance to explain. Just because once upon a time Fab let Likotsi go, doesn’t mean they can’t find their happily ever after in the end.

|+| Add to Your Shelf
Once Ghosted, Twice Shy
Alyssa Cole

|+| Add to Your Shelf
Well Played
by Jen DeLuca

Jen DeLuca’s WELL MET came out in 2019 and was one of my favorite reads earlier this year. That’s why I was so excited for WELL PLAYED to come out this year. Readers met WELL PLAYED’s Stacey when she was introduced as a fellow Renaissance Faire barmaid to Emily in WELL MET. Now it’s Stacey’s turn for a happy ending, but a flirtatious email exchange with the Ren Faire’s resident band leader isn’t what Stacey thinks it is…and, in fact, the person she’s been emailing with is perhaps not even who she thinks he is. 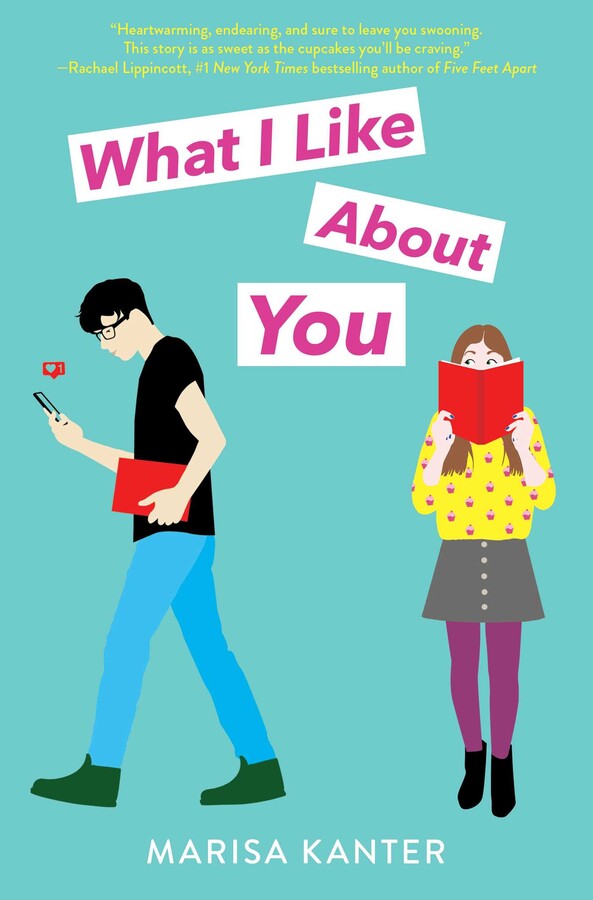 The online dating trope is full of one of my favorite sub-tropes: mistaken identity. When a love triangle is actually only two people, the stakes feel so high, and that’s definitely the case in WHAT I LIKE ABOUT YOU by Marisa Kanter. Halle Levitt has an online best friend, Nash, who knows everything about her except the fact that she’s not actually Halle, but the creator of an online comic who goes by Kels. Then Halle moves to live with her grandfather before the start of her senior year of high school, and she comes face-to-face with the real-life Nash. With no screens between them, whose heart will Nash want in the end: Kels’ or Halle’s?

|+| Add to Your Shelf
What I Like About You
Marisa Kanter

“Heartwarming, endearing, and sure to leave you swooning, What I Like About You shines with authentic characters you will absolutely fall in love with. This story is as sweet as the cupcakes you’ll be craving by the end!” —Rachael Lippincott, #1 New York Times bestselling author

Can a love triangle have only two people in it? Online, it can…but in the real world, its more complicated. In this debut novel that’s perfect for fans of Jenny Han and Morgan Matson, Marisa Kanter hilariously and poignantly explores what happens when internet friends turn into IRL crushes.

Is it still a love triangle if there are only two people in it?

There are a million things that Halle Levitt likes about her online best friend, Nash.

He’s an incredibly talented graphic novelist. He loves books almost as much as she does. And she never has to deal with the awkwardness of seeing him in real life. They can talk about anything…

Except who she really is.

Because online, Halle isn’t Halle—she’s Kels, the enigmatically cool creator of One True Pastry, a YA book blog that pairs epic custom cupcakes with covers and reviews. Kels has everything Halle doesn’t: friends, a growing platform, tons of confidence, and Nash.

That is, until Halle arrives to spend senior year in Gramps’s small town and finds herself face-to-face with real, human, not-behind-a-screen Nash. Nash, who is somehow everywhere she goes—in her classes, at the bakery, even at synagogue.

Nash who has no idea she’s actually Kels.

If Halle tells him who she is, it will ruin the non-awkward magic of their digital friendship. Not telling him though, means it can never be anything more. Because while she starts to fall for Nash as Halle…he’s in love with Kels.