This post is by Hannah Orenstein, author of HEAD OVER HEELS, an electrifying rom-com set in the high stakes world of competitive gymnastics. It was a Book of the Month pick, and named one of the best beach/summer reads by O, The Oprah Magazine, Cosmopolitan, PopSugar, Marie Claire, and more.

In 2017, when I worked at Seventeen, an invitation arrived in my email inbox. A publicist invited me to an event thrown by the mattress brand Leesa. Aly Raisman, a spokesperson for the brand, would be there. I didn’t write about mattresses, but I went anyway. Aly and I had grown up in Needham, Massachusetts a year apart; I was a former gymnast, too, and we had trained at two of the same gyms and attended the same high school. I remember hearing whispers in middle school that she could do a back layout on beam and would probably go to the Olympics someday. Sure enough, she went on to win six Olympic medals at the 2012 and 2016 Games, making her the third most-decorated Olympic gymnast in American history.

At the event, I found Aly in the crowd and was surprised to hear that she remembered me. I congratulated her on her forthcoming book, a memoir called Fierce: How Competing for Myself Changed Everything, and told her that I had a book coming out soon, too — Playing with Matches, a rom-com inspired by my experience working as a matchmaker for a luxury dating service. We chatted about books and gymnastics and reminisced about our hometown. I left the event with warm, fuzzy feelings of nostalgia.

I didn’t pick up Fierce when it came out in November 2017 because I figured I already knew Aly’s story from following headlines about her for years. I didn’t read it until my gymnastics obsession reached an all-time high during the summer of 2020. I had just published my third book, Head Over Heels, a novel about an elite gymnast who narrowly misses out on making the Olympics, and had spent weeks talking about gymnastics with journalists, podcast hosts, readers, and gymnastics fans. I was never going to come close to Aly’s success as a gymnast, but I had loved the sport so much. I wanted to read more about it. Sorely missing the 2020 Olympics, which had been postponed by a year due to the pandemic, I bought a copy of Fierce.

The first few chapters of Aly’s memoir were endearingly familiar. I adored reading about her fond memories of coaches I knew as a kid. I laughed at Aly’s frustration that our high school principal wouldn’t allow her to skip gym class because of her daily (often twice-daily) gymnastics practices; I, too, had tried to get out of an elective and the principal had shot me down. When she described her prom dress, a chocolate brown gown with beading, I got an eerie flash of recognition. I remembered her dress perfectly from when prom photos flooded my Facebook newsfeed nearly a decade ago.

But as the memoir progressed, I was hooked for a different reason: the behind-the-scenes look at the struggles and sacrifices an elite gymnast must make in order to have a shot at Olympic glory. At ten years old, when Aly chose to seriously focus on her gymnastics career, she began skipping out on family vacations; she couldn’t risk taking even a few days off from practice. She squeezed in homework on the drive to the gym and attempted to keep her handwriting steady over bumpy roads. On her 18th birthday, the night before a major competition, she skipped cake (the sugar would mess with her energy levels the next day) and instead blew out a candle next to a piece of salmon.

Fierce particularly shines during the frequent passages that depict the intense mental and emotional pressure Aly and her fellow athletes are placed under — occasionally by their coaches, often by Martha Karolyi (USA Gymnastics’ national team coordinator until 2016) and other staff, and always by themselves.

One particularly jarring scene takes place in 2010, hours after Aly won her first major all-around title as an elite gymnast at a competition in Italy. She celebrated by eating a slice of pizza at a team banquet. A national staff member berated her for it. “I called my mom in tears,” Aly wrote. “‘I’m so embarrassed,’ I told her, sobbing. ‘USA Gymnastics will probably never like me again. I’ll never get picked to be on another team.’ I thought my life was over.”

Later that year, while dizzy, lightheaded, and jetlagged at a competition in Australia, Aly made an error on vault. She recalled her coach, Mihai Brestyan, admonishing her. “You get back down that runway and do that vault again… Do you want Martha to be mad and think you can’t handle the pressure? Because that’s what you’re showing her right now.”

Even after Aly clinched the silver all-around medal during the 2016 Olympics, Martha quipped on NBC, “Vault wasn’t good there.”

This memoir also contains a heartbreaking scene in which Aly meets with a private investigator about the accusations against sports medicine doctor Larry Nassar (who later was sentenced to a minimum of 300 years in prison following brave testimony from 156 women, including Aly). It wasn’t until after the investigator left Aly’s house that she fully internalized she is a survivor of sexual abuse. “All through the years, there were so many distractions that kept me from analyzing his methods or my discomfort: another team to make, another competition to prepare for, another hurdle that required all my mental energy to surmount,” she wrote. “Whatever was going on around me took a back seat to perfecting my routines, to making sure that nothing kept me from being able to perform well. Larry knew this, and that’s what allowed him to get away with it for so long.” Aly concluded the chapter with a loud and clear message for readers: Sexual abuse can happen to anyone. If someone makes you uncomfortable, it’s important to speak out.

I’ve admired Aly since I heard about that back layout in middle school. Since then, her achievements have only gotten more impressive: I’m in awe of her athletic prowess, her profound courage in speaking out against abuse, her fight to make gymnastics safer for the next generation of athletes, and her commitment to giving back (she’s a spokesperson for Darkness to Light, a non-profit that aims to end child sexual abuse). But Fierce gives me one more reason to admire her, and it’s an inspirational lesson that gymnasts and non-gymnasts alike can appreciate. Dedication matters more than talent. Hard work and passion can get you far.

“While I was never the most talented one on the team, I had the most important component for success: a love for what you do,” Aly wrote. “The story of my life in gymnastics is an underdog one: From pre-team right up to making the Olympic team, people doubted whether I’d be successful… I would never wake up one day to find I was the best on the team. Quite the opposite: I was often the one who struggled the most to keep up with my teammates. But I worked ferociously, pushing myself so hard that I would eventually catch up.”

Indeed, she did — and then some. The scenes of triumph and success in Fierce are a joy to read. But even if she hadn’t achieved her Olympic dreams, Aly’s refreshing perspective, perseverance, and optimism would have made for a compelling read, anyway. 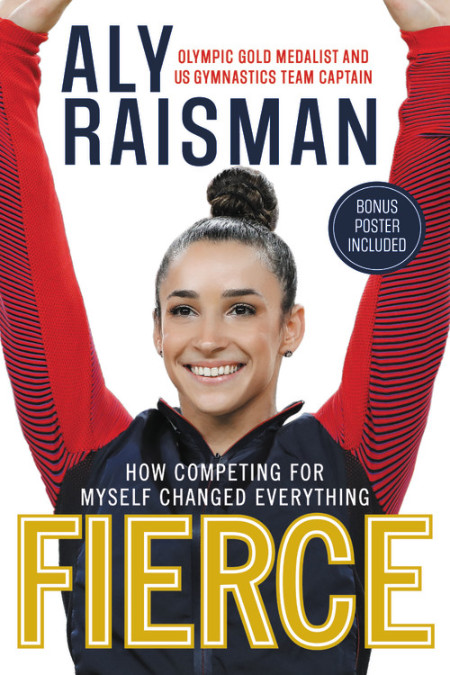 Hannah Orenstein is the author of HEAD OVER HEELS. Get more info about her novel here.