As we set sail into the summer months, I’m eager to get started on my reading goals. One thing I love most about summer is the extended daylight hours, which provide the perfect ambiance for me to sit on my porch and crack open a beloved novel. So, to honor our excitement and kick off summer reading, we’ve created an interactive reading challenge. Each week we’ll be posting a new reading challenge on our Instagram Stories and asking our readers to share their progress. Below are just seven out of the 14 challenges. If you’re looking for some inspiration to participate, here are a few books to check out.

|+| Add to Your Shelf
The Good Earth
by Pearl S. Buck

Historical Fiction Not Set in Europe:

For a rich historical fiction novel that takes place beyond the bounds of the typical European setting, THE GOOD EARTH is a Pulitzer Prize–winning masterpiece following a humble farmer’s journey through 1920s China. This literary journey will take you to a time when the last emperor still ruled and the sweeping changes of the twentieth century were distant rumblings, with this timeless, evocative classic tale of the honest farmer Wang Lung and his family as they struggle to survive in the midst of vast political and social upheavals.

|+| Add to Your Shelf
The Good Earth
Pearl S. Buck 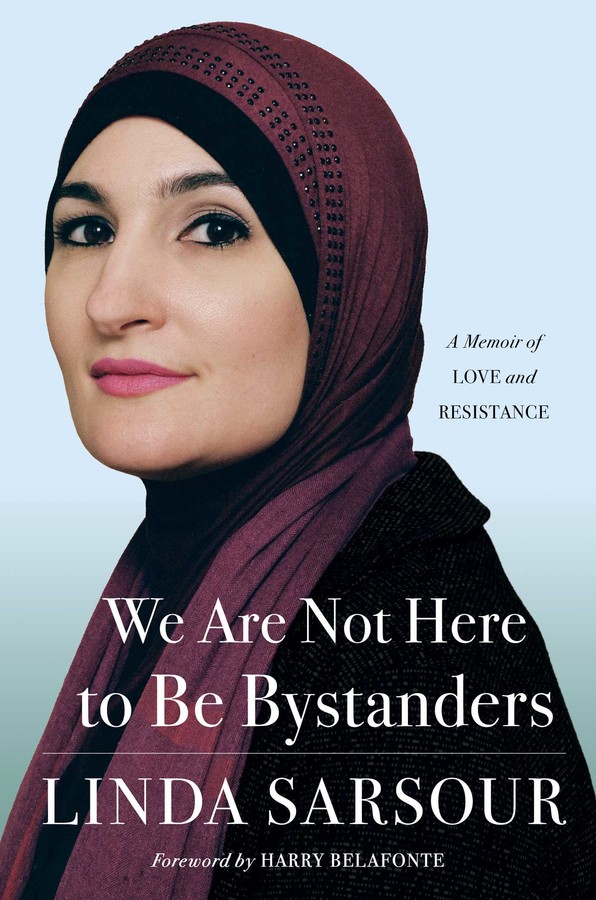 Memoir of Someone You Admire:

If you have not already incorporated memoirs into your regular reading habit, I highly recommend doing so. Reading the inner workings of one’s mind as they outline their life story is incredibly entertaining and educational. For an incredibly timely and powerful memoir, I suggest picking up WE ARE NOT HERE TO BE BYSTANDARDS. Linda Sarsour, co-organizer of the Women’s March, shares how growing up Palestinian Muslim American, feminist, and empowered moved her to become a globally recognized activist on behalf of marginalized communities across the country.

Linda Sarsour, co-organizer of the Women’s March, shares how growing up Palestinian Muslim American, feminist, and empowered moved her to become a globally recognized activist on behalf of marginalized communities across the country.

On a chilly spring morning in Brooklyn, nineteen-year-old Linda Sarsour stared at her reflection, dressed in a hijab for the first time. She saw in the mirror the woman she was growing to be—a young Muslim American woman unapologetic in her faith and her activism, who would discover her innate sense of justice in the aftermath of 9/11. Now heralded for her award-winning leadership of the Women’s March on Washington, in We Are Not Here to Be Bystanders Linda Sarsour offers a poignant story of community and family.

From the Brooklyn bodega her father owned, where Linda learned the real meaning of intersectionality, to protests in the streets of Washington, DC, Linda’s experience as a daughter of Palestinian immigrants is a moving portrayal of what it means to find one’s voice and use it for the good of others. We follow Linda as she learns the tenets of successful community organizing, and through decades of fighting for racial, economic, gender, and social justice as she becomes one of the most recognized activists in the nation. We also see her honoring her grandmother’s dying wish, protecting her children, building resilient friendships, and mentoring others even as she loses her first mentor in a tragic accident. Throughout, she inspires readers to take action as she reaffirms that we are not here to be bystanders.

In his foreword to the book, Harry Belafonte writes of Linda, “While we may not have made it to the Promised Land, my peers and I, my brothers and sisters in liberation can rest easy that the future is in the hands of leaders like Linda Sarsour. I have often said to Linda that she embodies the principle and purpose of another great Muslim leader, brother Malcolm X.”

This is her story.

|+| Add to Your Shelf
Infinite Jest
by David Foster Wallace

When I think of a long book, I immediately remember the triumph of forging through INFINITE JEST by David Foster Wallace. This classic novel explores the pursuit of happiness in America. Set in an addicts' halfway house and a tennis academy, and featuring the most endearingly screwed-up family to come along in recent fiction, Infinite Jest explores essential questions about what entertainment is and why it has come to so dominate our lives

Ernest Hemingway’s most beloved and popular novel, THE OLD MAN AND THE SEA, proved itself to be a classic enduring work of American fiction. It is the story of an old Cuban fisherman, down on his luck, and his supreme ordeal: a relentless, agonizing battle with a giant marlin far out in the Gulf Stream.

Read with a Mojito

This classic is the story of follows an old Cuban fisherman who is down on his luck and engaged in a relentless and agonizing battle with a giant marlin far out in the Gulf Stream. Pair this one with a classic mojito in a nod to papa Hemingway’s Cuban home.

5 Second Summaries: THE OLD MAN AND THE SEA

|+| Add to Your Shelf
Gone Girl
by Gillian Flynn

An unreliable character, whose credibility is compromised, makes for an added interesting story line. One great recommendation for this plotline is GONE GIRL by Gillian Flynn. On a warm summer morning in North Carthage, Missouri, it is Nick and Amy Dunne’s fifth wedding anniversary, when Amy disappears from their rented McMansion on the Mississippi River. While no one is sure what may have happened to her, passages from Amy's diary reveal that her perfectionist nature could have put anyone dangerously on edge. Under mounting pressure from the police, media, family, and friends a series of lies and deceits keeps everyone on edge. Nick is oddly evasive, and he’s definitely bitter—but is that enough of a suspicion?

Some say she’s cold and unfeeling, calculating to a subhuman degree, and basically totally nutso. I say Amy Dunne is just a smart, sensitive woman in a man’s world, frustrated by patriarchy, down with to-do lists, and dedicated to the fine art of revenge! This powerhouse of a novel sees crime writer Gillian Flynn come into her own as a dramatic storyteller in full command of her many gifts.

Love Is Dead: The Best Breakup Reads Based on Your Go-To Breakup Album

A Game of Books: What Would Your Favorite Game of Thrones Character Read?

One of my most loved books, that I have read time and again, is THE CURIOUS INCIDENT OF THE DOG IN THE NIGHTTIME. Christopher needs patterns, rules, and structure to navigate his world. But one day, when a neighbor’s dog, Wellington, is killed, Christopher’s carefully constructed world is threatened. He sets out to solve the murder in the style of his favorite (logical) detective, Sherlock Holmes. What follows makes for a novel that is funny, poignant and fascinating in its portrayal of a person whose curse and blessing are a mind that perceives the world entirely literally.

Now adapted into a Tony Award-winning play, this captivating novel is told through the eyes of a fifteen-year-old autistic boy who relates well to animals but has no understanding of human emotions. This powerful story of his quest to investigate the suspicious death of a neighborhood dog makes for a captivating read.

From the Stage to the Page: 9 Books That Fill The Broadway-Sized Hole in Our Hearts

|+| Add to Your Shelf
Make Trouble
by Cecile Richards

Non-fiction Book That Taught You Something:

The best part of reading is unintentionally learning at the same time. MAKE TROUBLE definitely provided both entertainment and some insightful lessons for me. As a young woman, Richards worked as a labor organizer alongside women earning minimum wage and learned that those in power don’t give it up without a fight. She experienced first-hand the misogyny, sexism, fake news, and the ever-looming threat of violence that constantly confront women who challenge authority. Now, after years of advocacy, resistance, and progressive leadership, she shares her story—from the joy and heartbreak of activism to the challenges of raising kids, having a life, and making change.

From Cecile Richards, the former president of Planned Parenthood for more than a decade, daughter of the late Ann Richards, featured speaker at the Women’s March on Washington, and “the heroine of the resistance” (Vogue), comes “an enthralling memoir” (Booklist, starred review) filled with “practical advice and inspiration for aspiring leaders everywhere” (Hillary Rodham Clinton).

Cecile Richards has been an activist since she was taken to the principal’s office in seventh grade for wearing an armband in protest of the Vietnam War. Richards had an extraordinary childhood in ultra-conservative Texas, where her civil rights attorney father and activist mother taught their kids to be troublemakers. She had a front-row seat to observe the rise of women in American politics and watched her mother, Ann, transform from a housewife to an electrifying force in the Democratic party.

As a young woman, Richards worked as a labor organizer alongside women earning minimum wage, and learned that those in power don’t give it up without a fight. She experienced first-hand the misogyny, sexism, fake news, and the ever-looming threat of violence that constantly confront women who challenge authority.

Now, after years of advocacy, resistance, and progressive leadership, she shares her “truly inspiring” (Redbook) story for the first time—from the joy and heartbreak of activism to the challenges of raising kids, having a life, and making change, all the while garnering a reputation as “the most badass feminist EVER” (Teen Vogue).

In the “powerful and infinitely readable” (Gloria Steinem) Make Trouble, Richards reflects on the people and lessons that have gotten her through good times and bad, and encourages the rest of us to take risks, make mistakes, and make trouble along the way.