Money can’t buy happiness. But if you’re flush, why not deck your misery in diamonds and stuff your sorrows with caviar? Here are eight novels where excessive wealth enables characters to take their joylessness to the penthouse level.

|+| Add to Your Shelf
The Beautiful and Damned
by F. Scott Fitzgerald

“Rich and unhappy” is Fitzgerald’s forte, and readers are generally most familiar with the lovelorn Jay of The Great Gatsby. But if you’re looking for a train wreck of truly opulent proportions, look no further than the protagonist couple of The Beautiful and Damned. High-society scion Anthony Patch is lazy and vain. Gloria Gilbert is selfish and spoiled. So naturally, they get married—then proceed to tear each other apart when the money runs dry.

|+| Add to Your Shelf
The Beautiful and Damned
F. Scott Fitzgerald

It’s generally believed that Scott and Zelda’s relationship inspired THE BEAUTIFUL AND THE DAMNED, which followed his massive hit TENDER IS THE NIGHT. Anthony Patch, an Army serviceman and heir to a tycoon’s fortune, meets and marries the wild, passionate (and sometimes selfish) Gloria Gilbert. What follows is a roller-coaster relationship that rivals its real-life counterpart.

Z Is for Zelda: 11 Novels to Cure Your Fitzgerald Fever

Epic and intricate, Mizumura’s loose retelling of Wuthering Heights is set amid rising and falling fortunes in postwar Japan. Among those in descent: the three beautiful but snobby Saegusa sisters, who cocoon themselves from the reality of their diminishing status with the help of elegant furnishings and activities.Their twilight forms the backdrop for the astronomic rags-to-riches ascent of the Heathcliffesque character Taro Azuma. But for all Taro’s success, true happiness with the love of his life remains out of reach.

|+| Add to Your Shelf
Ilustrado
by Miguel Syjuco

Syjuco’s novel takes its title from the term used to describe the Western-educated elite in the colonial Philippines: the ilustrados or enlightened ones.Indeed, two modern-day ilustrados are the leading characters: the Filipino literary giant Crispin Salvador, whose corpse is found floating in the Hudson, and his student Miguel, who flies from New York back toManila to solve the mystery behind his mentor’s death. As the narrative unfolds, we get glimpses of the privileged life Miguel has tried to flee—his politically powerful family, his hedonistic childhood friends, and the pretentious social circles that circumscribe them all. 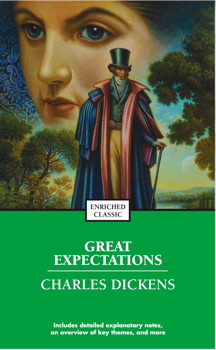 |+| Add to Your Shelf
Great Expectations
by Charles Dickens
It goes without saying that a jilted bride is unhappy. But “unhappy” seems a bit of an understatement when you’re talking about a jilted bride who refuses to change out of her wedding gown and shuts herself in her mansion with her decaying vermin-infested wedding cake for several decades. If that weren’t enough, Miss Havisham raises her adopted daughter—Estella—to be heartless and to break men’s hearts. When Pip—a blacksmith’s apprentice—mysteriously comes into some money, he starts living lavishly to impress her. Which proves to be a supremely bad idea.

Enriched Classics offer readers accessible editions of great works of literature enhanced by helpful notes and commentary. Each book includes educational tools alongside the text, enabling students and readers alike to gain a deeper and more developed understanding of the writer and their work.

Enriched Classics enhance your engagement by introducing and explaining the historical and cultural significance of the work, the author’s personal history, and what impact this book had on subsequent scholarship. Each book includes discussion questions that help clarify and reinforce major themes and reading recommendations for further research.

|+| Add to Your Shelf
The Court Dancer
by Kyung-Sook Shin, translated by Anton Hur

Precocious orphan Yi Jin is brought into the royal palace at the age of five. There she grows up to become one of Queen Myeongseong’s closest attendants and companions. The splendor and luxury of court life turn to ash in Yi Jin’s mouth when the Queen turns inexplicably cold and sends her to live with a French diplomat who has become infatuated with Yi Jin. He takes her to glittering Paris, where he promises she will experience unparalleled freedom. But even the brightly lit boulevards and sophisticated literary salons can’t remedy the deep cultural isolation she experiences or staunch her yearning for home.

|+| Add to Your Shelf
The Court Dancer
Kyung-Sook Shin, translated by Anton Hur

Readers’ Choice: Your 6 Favorite Historical Novels and What to Read Next

|+| Add to Your Shelf
The Girl from the Coast
by Pramoedya Ananta Toer, translated by Willem Samuels

Our heroine is a 14-year-old from a poor fishing village in Java whom a local nobleman purchases as his wife. The girl (we are never told her name) is installed in a luxurious house and taught to regard her husband—whom she refers to as Bendoro, or Master—as the be-all and end-all of her existence. Unable to come and go as she pleases, she languishes in solitude during the long periods the Bendoro is away. The Bendoro seems far from content himself: he’s gone through several“practice wives.” Also, for health reasons he undergoes bleeding sessions with medicinal leeches, all of whom he has affectionately named.

|+| Add to Your Shelf
The Girl from the Coast
Pramoedya Ananta Toer, translated by Willem Samuels

|+| Add to Your Shelf
The Age of Innocence
by Edith Wharton

In Wharton’s iconic novel, the gilded cage of New York high society is outfitted with iron bars. So discovers Newland Archer when he falls in love with the nonconformist social pariah, Countess Olenska. In order to pursue the countess, Archer must break off his relationship with the unblinkingly conventional May Welland. But to his terror, he finds that the bounds of supposed propriety don’t take kindly to being crossed.

|+| Add to Your Shelf
The Age of Innocence
Edith Wharton

Edith Wharton was the first woman to win the Pulitzer Prize for Fiction for The Age of Innocence, which explores the joys and scandals surrounding the marriage of an upper-class New York couple during the Gilded Age.

Hemingway, Fitzgerald, Wharton and Wolfe: 10 Classics You Should Never Live Without

|+| Add to Your Shelf
The Secret History
by Donna Tartt
Eager to leave his dreary working-class upbringing behind him, Tartt’s narrator opts for an education at an elite liberal arts college. But when he accidentally joins a select coterie of wealthy Classics-obsessed eccentrics, he finds himself in over his head. Especially when he lets them assume he’s as upper crust as they are. Especially when they confide to him they’ve accidentally murdered someone while reenacting a Bacchanalian rite. The plot thickens as secret animosities and attractions continue to rise to the surface. Who knew that being hyper-rich and hyper-cultured could be so stressful?

|+| Add to Your Shelf
The Secret History
Donna Tartt

If your favorite character is Jonathan Byers

The misunderstood, unhappy kid who yearns for an East Coast college where he can forget his modest upbringing and meet sufficiently interesting friends? Sounds like Richard Papen, the narrator of Donna Tartt’s first novel, THE SECRET HISTORY.

Readers’ Choice: The Top 10 Most Shelved Books in September

Tiffany Tsao is the author of three books. Learn more about her newest novel, THE MAJESTIES!