The atmospheric and lyrical novel THE BEAR AND THE NIGHTINGALE by Katherine Arden invokes all the elements that I love about historical fantasy. Starting with page one, we are thrown headfirst into the cruel and unforgiving world of medieval Russia, where we meet Vasilisa Petrovna, the youngest daughter of a wealthy family. Growing up, Vasya always heard tales about Morozko, the demon of winter, and other spirits that live in among the villagers. But for Vasya, who comes from an ancient magical lineage and thus can see spirits everywhere, these stories are her reality. Vasya manages to keep these sightings a secret until her stepmother starts to see them, too, and is terrified, thinking they are the work of the devil.

When a new priest comes to town, he convinces the villagers to give up the old ways and dedicate their lives 100 percent to God. Coincidentally, soon after his arrival the crops start failing and people start dying mysteriously. As the offerings to the old spirits become virtually nonexistent, Vasya herself is left trying to keep these spirits, who protect her home and people from evil, alive. Using her powers and courage Vasya tries to defeat this new, unknown demon that even Morozko cannot defeat alone.

The bitter cold of winter serves as the primary setting for the events that take place throughout this story. As soon as I started reading it, I felt immersed in the story due to the language that Arden uses to describe these brutal winter scenes. Her emphasis is on strong imagery of the freezing cold temperatures and detailed descriptions of the curious creatures that Vasya sees, which allow her to spend time setting the overall atmosphere of the story versus just describing the physical attributes or characterizations of each person.

Arden’s use of Russian folklore made the story seem more like a fairy tale than anything else. Rooted in reality, it is simply these slight fantastical elements woven into the plot that make the story seem familiar and nostalgic. And as you get to know these spirits it’s impossible not to really care for them as you root for their survival.

Vasya is one of the most determined and courageous characters that I have had the pleasure to read about. No matter what she faces, she does not let herself become afraid. She is single-handedly trying to save her entire village and doesn’t let a single thing hold her back. Even as the rest of the villagers start to worship God more completely, becoming fearful for their lives if they do not repent their sins, she remains true to the old ways that have served the village for centuries.

With that said, I thought that one of the most interesting conflicts in the story was the battle between the old ways of worshipping the spirits versus Christianity. It is only when the new priest comes to town that everyone grows fearful, which ultimately draws the attention of the frost-eyed demon.

Because of the fairy tale–like elements I was enthralled with this story. I found the entire book immensely entertaining from beginning to end and thought it was a wonderful debut that showed off Arden’s magnificent storytelling.

The Bear and the Nightingale
by Katherine Arden 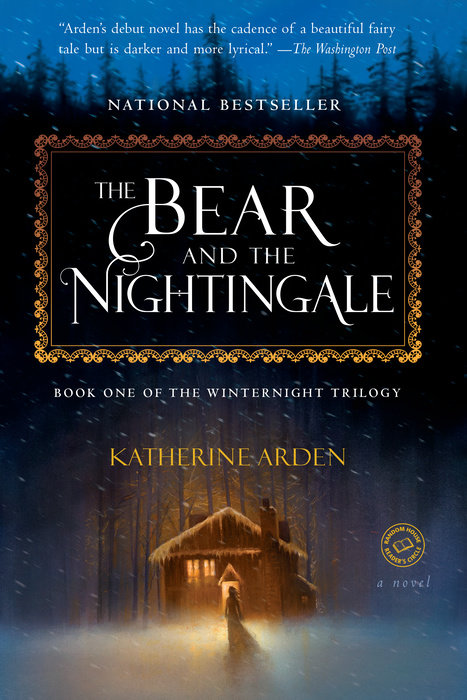 |+| Add to Your Shelf
The Bear and the Nightingale
Katherine Arden

8 Books for Grownups Who Love Fairytales and Folklore

Readers’ Choice: The Top 10 Most Shelved Books in July

An Eerie, Whimsical Novel for Readers of Historical Fantasy