Lauren Weisberger’s world of THE DEVIL WEARS PRADA can be described as glamorous, tactical, and intriguing, which is why Emily Charlton—formerly an assistant to the Devil herself, Miranda Priestly—fits in so well. In Weisberger’s follow-up, WHEN LIFE GIVES YOU LULULEMONS, Emily receives the standalone story she deserves. Honestly, I didn’t think I’d be so enthralled with a novel surrounding the dramatic lives of some housewives from Greenwich, Connecticut, but Weisberger’s humorously charming tone does not disappoint.

In the same snarky, witty, and captivating voice we’ve grown to love, Lauren Weisberger chronicles Emily’s move to the suburbs where she meets two other women—also new to this suburban lifestyle. Together, they navigate Greenwich in the hopes of reclaiming the high life and public approval they once enjoyed.

Emily has always been my favorite character in all of Weisberger’s works and needless to say I was so excited to see she was getting her own book. She’s essentially that one friend we all have who says what everyone is thinking and doesn’t care who she offends. She’s not afraid to tell you if she hates your outfit or if the guy you’re seeing is terrible. Emily’s honesty is pretty liberating, and this makes her character so likeable. She is unapologetically herself—a rather commendable trait to have in today’s society, if you ask me.

While reading WHEN LIFE GIVES YOU LULULEMONS, I was, once again, captivated by Emily’s ability to clap back at anyone and anything in her life. Her snarky comments are always on point, and she has no shame in teetering the edge of what is and isn’t appropriate to say in social settings. Here are my top four Emily Charlton sassy moments.

Emily on the Greenwich housewife lifestyle

“Are you coming from actually working out?” Emily asked. “Or are Lululemons considered getting dressed around here?”

Emily makes it VERY clear throughout the book how much she dislikes the Greenwich housewife lifestyle. She’s extremely vocal in her distaste for the SoulCycle and dinner party schedule her old friends have grown accustomed to in the recent years. So, it makes sense that she throws a few (hundred) veiled insults that reflect her true feelings.

Emily on (other people’s) personal style

“I’m sure there’ll be plenty of wine, so I’ll be fine. Please? I won’t embarrass you.” Emily motioned again to Miriam’s outfit with a look of pure disgust. “Although I hardly think I’ll be the problem.”

As those of you who are familiar with Emily in the world of THE DEVIL WEARS PRADA know, she is extremely opinionated when it comes to style. So, of course, a jab or two toward her friends’ outfits are needed every now and again. Are you really friends with someone if you can’t tell your honest opinion on their style choices, anyway?

“You’re not the type? You have no idea who you’re talking to. I do not talk to people on trains. I don’t even ride trains.”

It’s probably safe to assume that public transportation isn’t anyone’s favorite thing in the world. This one hundred percent applies to Emily Charlton. She makes it abundantly clear that the train is the last place she wants to be, right after Greenwich, Connecticut, of course.

Emily on reading the male species

He cocked his head. “How did you know I was sailing?” Emily looked him up and down. ‘“You’re British, exceedingly preppy, and living in Greenwich. What else would you possibly be doing there? Taking cooking lessons?’”

Who doesn’t love outwitting a preppy, arrogant, sailing-obsessed businessman every now and again?

WHEN LIFE GIVES YOU LULULEMONSis full of one-liners and snark, which makes it the charming novel that it is. Emily Charlton is the heart of the storyline and her character has so many relatable layers that are unveiled throughout the book.

When Life Gives You Lululemons
by Lauren Weisberger 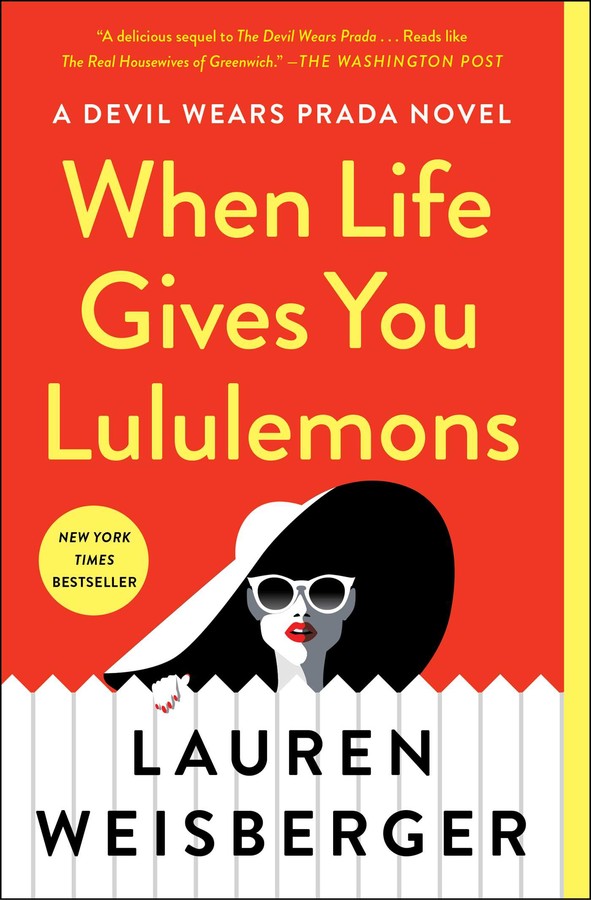 |+| Add to Your Shelf
When Life Gives You Lululemons
Lauren Weisberger

10 Comfort Reads to Cheer You Up in No Time

Psst, Moms! 6 Enticing Books for When You Need a Break

6 Fantastic Novels New in Paperback This May